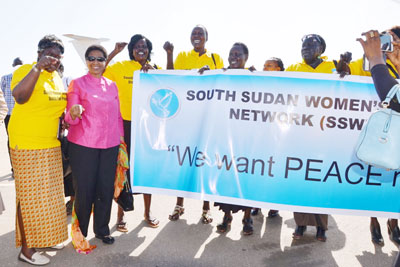 Upon her arrival in South Sudan UN Women Executive Director Phumzile Mlambo-Ngcuka is welcomed by women from the South Sudan Women's Network who passionately told her they want peace.
Photo: UN Women/Rose Ogala

From 7 to 8 July 2015, UN Women Executive Director Phumzile Mlambo-Ngcuka is visiting Juba, South Sudan as a follow-up to her previous mission in February 2014. Against the backdrop of increasing violence and as peace talks continue, during this visit the Executive Director will strongly reiterate the importance of raising women’s full participation in peace and security, calling for inclusive and sustainable peace agreements in line with UNSCR 1325. 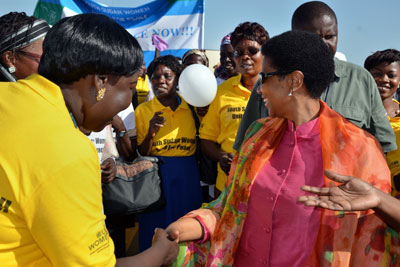 In support of  UN Women’s role as a key player in protection of the rights of women and girls, and gender mainstreaming in peacebuilding and humanitarian response, on 7 July, the Executive Director met with South Sudanese Vice-President James Wani and members of the Cabinet, as well as members of civil society and the South Sudan Women’s Peace Network. 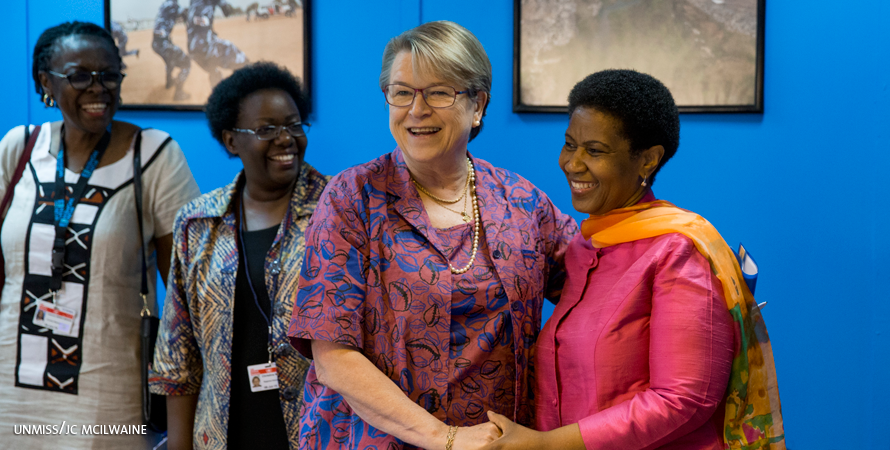 This visit  will also provide the opportunity for the Executive Director to galvanize increasing support for promotion of gender equality and reduction of violence against women and girls in South Sudan, through UNMISS’ leadership. 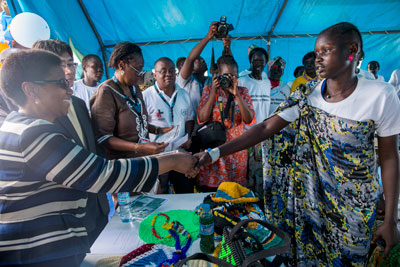 In solidarity with Sudanese women facing daily conflict and the highest level of humanitarian crisis, level 3, the Executive Director will hold bilateral meetings on 8 July with women leaders of South Sudan, including First Lady Mary Ayen Mayardit and other high-level women in Parliament and UN leadership. That same day, Ms. Mlambo-Ngcuka will also visit a United Nations Mission in South Sudan (UNMISS) Protection of Civilians site to reiterate UN Women’s commitment to fill the gap in providing services to meet the particular needs of displaced women and girls. She will launch the HeforShe campaign at UNMISS to help raise awareness among men across the country so that they can become stronger advocates for women.

Related News
Statement by UN Women on the adoption of Security Council resolution 2242 on women, peace and security
From where I stand: Rita Lopidia
Empowering Women to Meet New Challenges, from National Development to Conflict Prevention and Post-Conflict Recovery
Women, War and Peace
At UN Security Council, UN Women calls for leadership for inclusive peacebuilding
END_OF_DOCUMENT_TOKEN_TO_BE_REPLACED