“When women come together to use their voices, the world has no choice but to respond” –Yuwei Lee 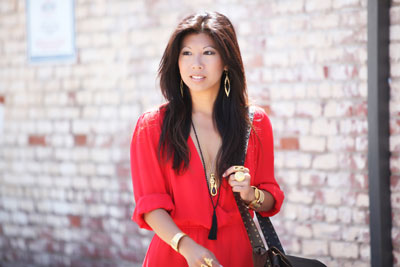 Yuwei Lee is a US-based jewellery designer and founder of Yuwei Designs. In 2014, Yuwei Designs launched an exclusive range of jewellery to promote and support the United Nations Trust Fund to End Violence against Women (UN Trust Fund) and initiatives to prevent and end violence against women and girls. An active advocate, Yuwei Lee has sought to engage the fashion world on the issue and she hopes people will use Yuwei Designs to connect with the goals of ensuring respect for women and promoting the life chances of women and girls around the world. Here, Yuwei Lee shares her story, talks about what motivated her to work with the UN Trust Fund and shares the inspiration behind her designs.

“Unknown to most people, I grew up in a home environment in which there was physical, verbal and psychological abuse. After graduating from college on the West Coast of the United States, I settled there with a stable corporate career, but I had a pervasive feeling of unhappiness and dissatisfaction. Over time, as I began to acknowledge and work through my childhood experiences, I came to understand how they had become deeply embedded in me emotionally. As I began to heal, I gained a confidence and clarity I never had before. 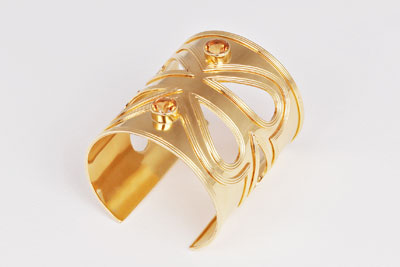 Yuwei Lee designed and launched an exclusive jewellery collection, inspired by the work of the UN Trust Fund to End Violence against Women and the women it supports. Photo: Courtesy of Yuwei Designs/Christopher Nebel

My family wasn’t supportive of my dream to be a fashion designer. But as I grew stronger, I was able to choose the things I wanted and take action towards achieving them. Late in the evenings, after work, I started sketching jewellery designs. This became a passion and I felt a restoration beginning to take place. One day, driving home from work, I had the realization that I could find fulfilment in jewellery design and that it would give me an avenue to help other women. Soon after, I took the risk of leaving my corporate career to focus on creating my business.

What attracted me to the UN Trust Fund was its global reach and its focus on supporting programmes which address the complexity of the issue. In addition to supporting those who provide services to women who have faced violence, it attempts to prevent violence by getting to the root causes. It supports programmes that aim to change laws and engage men and women, boys and girls. 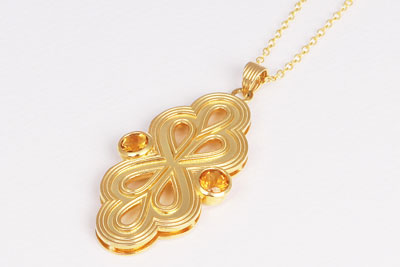 Yuwei Lee's designs incorporate orange, one of the official colours of the UN Trust Fund, as a symbol of a bright future for women and girls. Photo: Courtesy of Yuwei Designs/Christopher Nebel

For the UN Trust Fund, I designed and launched the Opportunity Initiative, an exclusive jewellery collection, inspired by the work of the Fund and the women it supports. The designs incorporate orange citrine stones; orange is one of the official colours of the UN Trust Fund and is symbolic of a bright future for women and girls, free of violence. The designs also reflect my reading of the Trust Fund’s logo, a teardrop representing the strength, dignity, and healing of survivors of violence. It was important for me, in my own healing process, to donate 100 per cent of net proceeds of this collection to the UN Trust Fund.

The initiative has given me the opportunity to bring the issue to the attention of the fashion world. It has a huge role to play given its influence and reach. I want to encourage the industry to honestly and carefully consider how it portrays women. Too often we only tell one story about women – as objects – and we are perpetuating dangerous messages about body image, sexuality and worth. I work with many women in the fashion industry who are savvy, intelligent and talented. I want to encourage them to use their voices and to ensure that women are represented with all their attributes and a sense of self-worth. I believe telling the real story will still sell products and that when women come together to use their voices, the world has no choice but to respond. 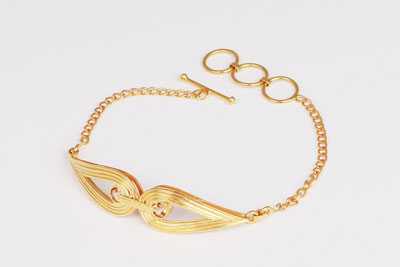 One hundred percent of the proceeds of Yuwei Lee's Opportunity initiative are donated to the UN Trust Fund. Photo: Courtesy of Yuwei Designs/Christopher Nebel

My engagement with the UN Trust Fund has made me realize how pervasive the problem is and how violence against women and girls is so often accepted as inevitable. Speaking on the issue hasn’t been easy for me. I’ve had to come to terms with talking publicly about my own experiences and am grappling with the impact this has had on my family. Before speaking publicly, I had to tell my daughter about my experiences for the first time, but I am so rewarded that she can see me involved in such a meaningful project. She has seen me in more difficult times, though she now sees me as an empowered woman. I hope this will help her and other young women to find their voices too.”

Eight limited-edition designs were produced in partnership with the UN Trust Fund to raise awareness of the innovative and effective strategies pioneered by UN Trust Fund grantees.