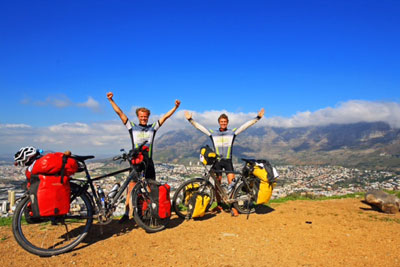 Saddling their bicycles, they made their last steep climb. After thousands of kilometres of dirt roads, small mountain paths, jungle trails and deserts, through 20 countries on two continents, their final destination was on the horizon: the townships of Cape Town.

This week UN Youth Delegate Jilt Van Schayik and his friend Teun Meulepas wrapped up a six-month cycling odyssey from Amsterdam to Cape Town, aimed at hearing what people – and youth in particular – have to say about the development of the new United Nations Sustainable Development Goals. UN Women Executive Director Phumzile Mlambo-Ngcuka and Cape Town Mayor Patricia de Lille attended a ceremony to mark the end of their journey on 12 August, International Youth Day. 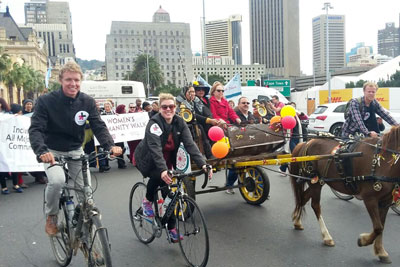 Armed only with the gear that fit on their bicycles, a computer and a camera, they worked with young ambassadors in each country to organize forums and consultations discussing gender issues as well as results from the MY World Survey so as to understand the specific development priorities of young people in each country. They also visited community initiatives, and involved people they met along the way from rural and urban settings through a photo series called Humans of MY World.

Jilt and his friend Teun founded the cycling project Building Bridges to focus on learning about, and broadcasting, the priorities of young women and men at a grass-roots level. Building Bridges received logistical and networking support from UN Women, UN DESA, the Youth Focal Point's Office, the Dutch Embassies and UN Information Centres in the countries they visited. 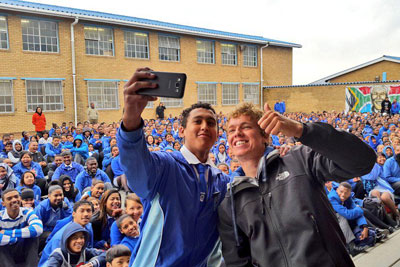 On 8 August, the Building Bridges South Africa team, the Dutch Consul of Cape Town, local media and their own families welcomed the cyclists. The arrival was scheduled just in time to celebrate National Women’s Day in South Africa on 9 August, when the Building Bridges South Africa team co-organized a Woman’s Humanity Walk, bringing together female leaders from different faiths for an interfaith blessing and celebration of women. Speakers praised the inner strength and resilience of women and commemorated those who had fought so hard for gender equality. Following the ceremony, the Building Bridges team visited a community centre, where a ceremony was held for homeless women, listening to their specific priorities and stories.

A youth forum was organized on 10 August at the University of Cape Town. Youth spoke about gender issues and shared poetry and songs about women in open sessions. Young South Africans discussed the specific challenges they face in the cross-section of race, class and gender. Echoing many youth the cyclists met across Africa, many attending the forum noted that education, protection against crime and violence, better job opportunities and better healthcare were also among the most important development challenges. 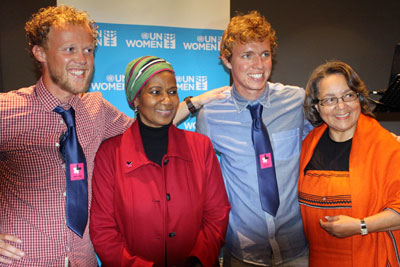 The team kicked-off International Youth Day on 12 August by spending time with young students in schools in the township – speaking with them about gender issues, capturing their portraits and stories, and discussing their top MY World priorities. Students called for an end to gang-related crime, particularly violence against girls and women in public spaces. In the evening, Jilt and Teun were joined by the Executive Director of UN Women, the Mayor of Cape Town and many others to celebrate the successful end of the cycling tour, and to continue to elevate the voices of youth to an international stage. The cyclists both pledged to continue to promote the inclusion of youth as serious actors in the new global Sustainable Development Agenda, and to champion the message of gender equality.

Biking to give youth a voice in the post-2015 roadmap