During her first visit to the United Arab Emirates (UAE) this week, UN Women Executive Director Phumzile Mlambo-Ngcuka inaugurated  UN Women’s Liaison Office for the Gulf region in Abu Dhabi, signed a Memorandum of Understanding with Islamic Relief Worldwide (IRW) to strengthen joint work on gender equality and the empowerment of women in the Muslim world, and attended the “Investing in the Future – the Resilience of Women and Girls in the Arab Region” conference, in addition to meeting with civil society representatives, high-level officials and youth from the region.

Highlights of the Executive Director’s visit

In a new milestone for women of the Arab Region, the second “Investing in the Future – the Resilience of Women and Girls in the Arab Region” conference closed with the adoption of the “Sharjah Declaration for the Rights and Empowerment of Women and Girls”—a comprehensive statement of commitments to achieve gender equality and the empowerment of women.

The two-day conference, organized by UN Women in partnership with the Big Heart Foundation and Namaa for Women Advancement Establishment under the patronage of His Highness, Sheikh Sultan Bin Mohamed Al Qasimi, the Ruler of Sharjah, brought together government officials and representatives of international and regional civil society organizations. It tackled a range of issues, including streamlining gender perspective in humanitarian action, actively engaging women in peace and security processes in the region, women’s rights in Islam and the need to broaden collaboration with faith-based organizations, men and boys as champions of gender equality and the value of women’s economic participation. 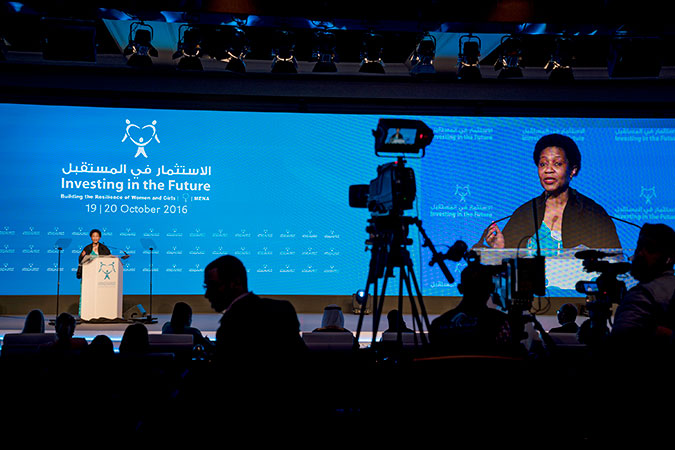 UN Women Executive Director speaks at Investing in the Future—the Resilience of Women and Girls in the Arab Region Conference in Sharjah. Photo: UN Women/Christopher Herwig

In her remarks at the opening ceremony of the conference, Ms. Mlambo-Ngcuka said: “In order to build the resilience of women and girls, we need to focus on both their immediate recovery needs and longer-term solutions that support sustainable peace and security. But most importantly we must recognize that women and girls are not a burden or a charity case; they are resilient, they are solution-makers, and they can stand up for themselves.” Read the full speech>> 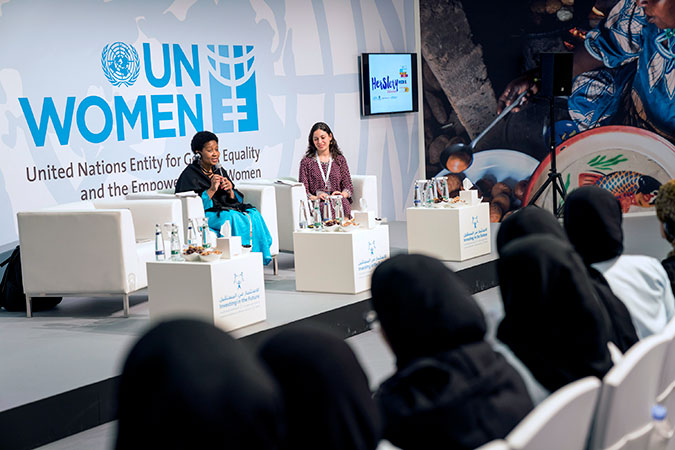 At a breakfast event earlier in the morning, the Executive Director also met with civil society representatives from the Arab region working on engaging men and boys as champions of gender equality, women’s engagement in peacebuilding, women’s rights in Islam and youth mobilization for advancing gender equality. 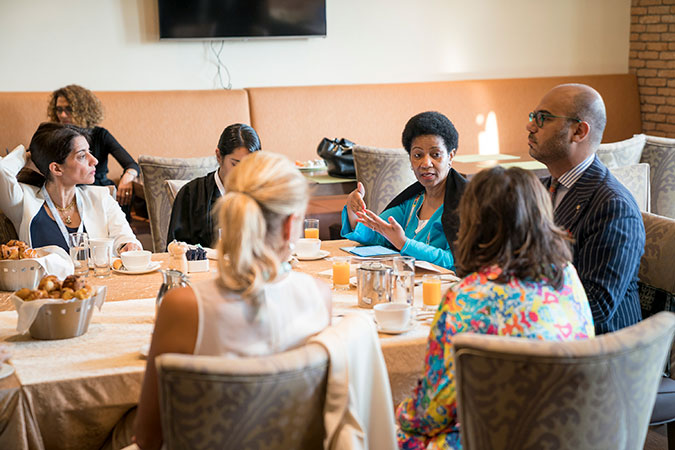 The conference also convened a youth workshop, which built upon the HerStory campaign started by UN Women’s Empower Women initiative earlier this year, in partnership with Wikipedia, to close the gender knowledge gap. The workshop also discussed how to advance gender equality and women’s role in politics and peacebuilding. 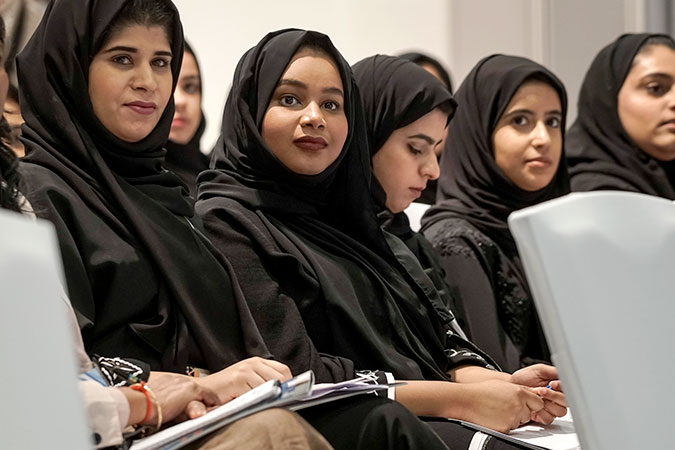 Speaking about what they need from their male family members to pursue bigger dreams and take on more active roles in their society, a group of female Emirati students took turns sending messages to the male members of their communities.

A young participant remarked on the importance of sharing household responsibilities for gender equality. “When men help women with chores, this is justice. Justice in the family will eventually lead to justice in the society,” she said.

Executive Director Phumzile Mlambo-Ngcuka inaugurated UN Women’s Liaison Office for the Gulf region in Abu Dhabi. The Liaison Office, the first of its kind in the Gulf region, will enable UN Women to build and strengthen a robust partnership with the Gulf Cooperation Council (GCC) countries, support and accelerate efforts to achieve gender equality and women’s empowerment that several Gulf States have been undertaking in the past two decades. 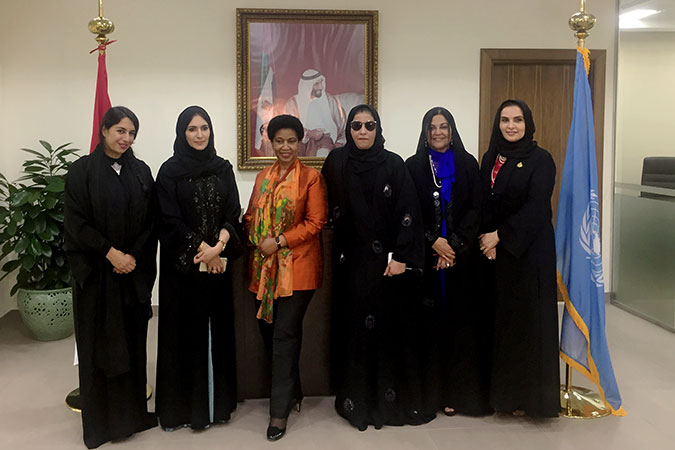 UN Women Executive Director Phumzile Mlambo-Ngcuka and the Chief Executive Officer of Islamic Relief Worldwide (IRW), Naser Haghamed, officially launched a Memorandum of Understanding in the United Arab Emirates to strengthen joint work on gender equality and the empowerment of women in the Muslim world. 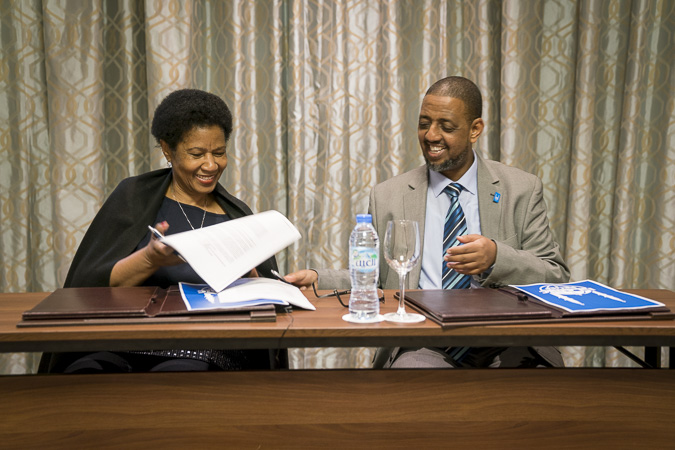 The bilateral meeting activated a partnership of strong collaboration and mutual-interest with a particular focus on the areas of humanitarian assistance to women in conflict-ridden and refugee communities, combatting violence against women and girls and starting a broad dialogue on the Islamic discourse on women’s rights and gender equality.

IRW is an independent humanitarian and development organization based in the United Kingdom with a presence in over 40 countries around the globe, with a focus on fighting poverty. Read the full story>>