Kicks off the joint programme to advance business opportunities for women, with UAE and Procter & Gamble

The Summit, hosted by the NAMA Women Advancement Establishment, in partnership with UN Women, is themed “Women Excelling in the Economy.” At the Summit, global and regional experts will highlight how companies, governments, international organizations and civil society can work together to increase the participation of women-owned enterprises in value chains and create decent jobs for women.

Executive Director will celebrate the co-organizing of the Summit as the first joint activity under the partnership with NAMA. Following the Summit, UN Women will continue to work with NAMA towards  a transformative, results-driven international programme, “Stimulating Equal Opportunities for Women Entrepreneurs”, with support from leading global company Procter & Gamble. The programme aims to create business opportunities for women and in collaboration with companies, governments and entrepreneurs, make value chains work for women, in UAE, South Africa and other countries.

The Sharjah conference is taking place in the context of the global campaign, ‘16 Days of Activism Against Gender-Based Violence’, which raises awareness and advocates action on the pandemic of violence that impacts one in three women globally. Violence against women comes at an enormous cost to women’s economic empowerment and the economy as a whole. Sexual harassment costs a typical Fortune 500 company $6.7 million a year in absenteeism, low productivity, and employee turnover. The Women’s Empowerment Principles (WEPs), a UN Women-Global Compact initiative, provides seven recommendations to guide companies to empower women in the workplace, marketplace and community. Tackling sexual harassment is a major priority of the Principles.

As part of the global activism of the 16 Days Campaign, Sharjah’s iconic Flag Island will be lit in orange on 4 December.

Women’s economic empowerment is key to driving sustainable livelihoods and economic growth for all. For instance, recent research shows that if women play an identical role in labour markets to that of men, as much as $28 trillion, or 26 percent, could be added to global annual GDP by 2025.

With high-level participants pledging concrete actions, the Sharjah Summit will be an opportunity to promote multi-stakeholder partnerships among governments, civil society and the private sector to implement the recommendations of the UN Secretary General’s High-Level Panel on Women’s Economic Empowerment.

Set up by the former UN Secretary-General Ban Ki-moon during his tenure, the High-Level Panel identified seven key drivers for women’s economic empowerment worldwide, which include improving public sector practices in employment and procurement, changing business culture and practice, and increasing women’s digital and financial inclusion, skills development and ownership of property.

In addition to participating in the Summit, the Executive Director is expected to meet with high-level representatives in Sharjah, including H.H. Sheikha Fatima Bint Mubarak El Ketbi, the Mother of the Nation, and H.H. Sheikha Jawaher bint Mohammed Bin Sultan Al Qasimi, the host of the Summit.

Highlights from the Executive Director’s visit to Sharjah 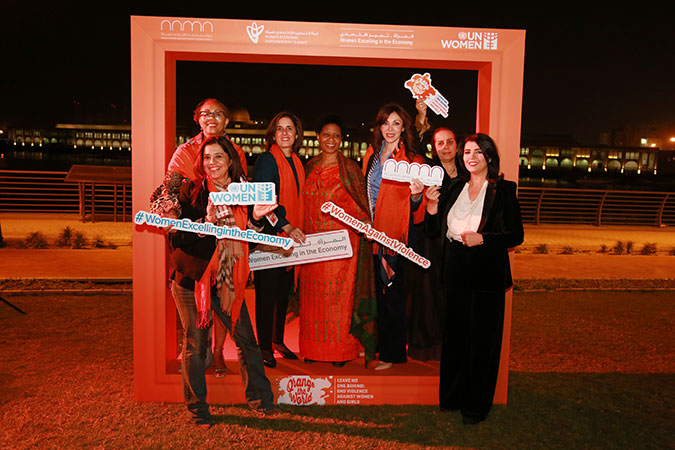 UN Women and NAMA Women Advancement Establishment gathered with partners to mark the 16 Days of Activism Against Gender-Based Violence in UAE. On this occasion, Sharjah's iconic Flag Island was lit in orange and artists and activists raised awareness about the issue, also urging men to step up their action to proactively prevent and, if needed, report violence against women and girls.

UN Women held a briefing session in partnership with P&G, WEConnect and Citi to discuss how to make women-owned businesses a priority, especially for suppliers of goods and services. Today, women only win one per cent of the procurement spent of large corporations. At this year’s UN GA, P&G and its partners announced that they would spend 400 million USD to promote women’s business enterprises through capacity development, increased sourcing and mentoring programmes to bridge this gap. 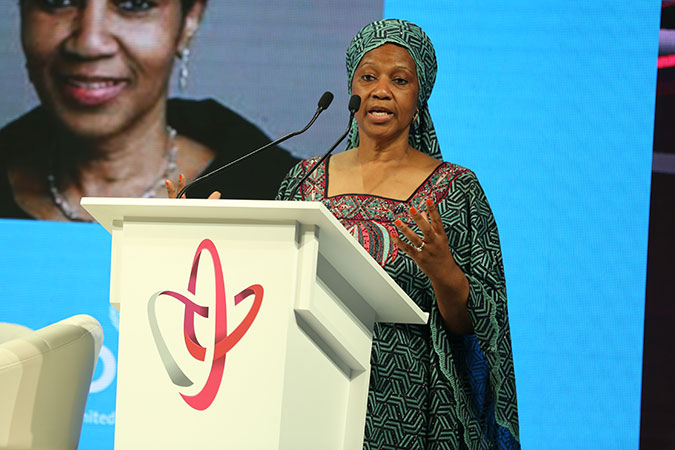 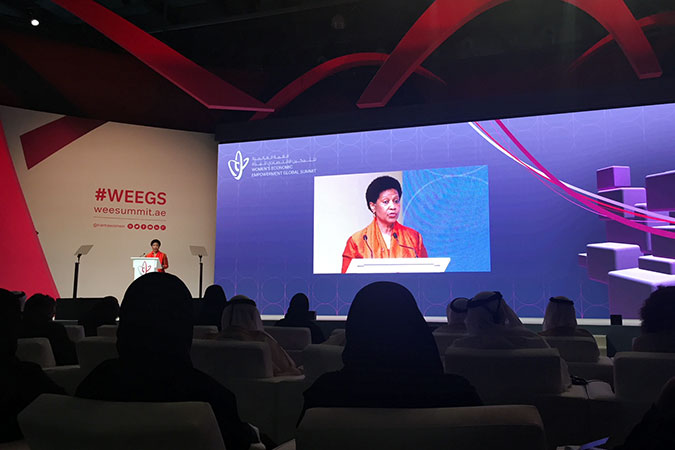 In her opening remarks, the Executive Director said, “We know that if women played an identical role in labour markets to men, as much as $28 trillion dollars, or 26 per cent, could be added to the global annual GDP by 2025. This is a lot of money and a lot of impact on the world economy. By gathering today, we are trying to make this a reality.” Read her full speech» 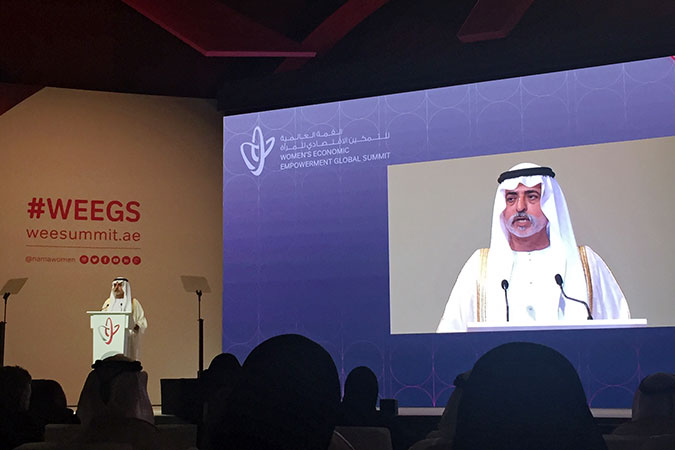