Women refugees and migrants get a place of their own 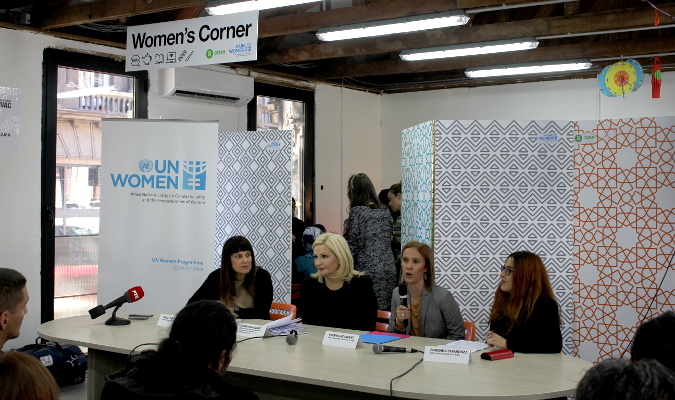 From left to right: Maja Lalic, director of the Miksaliste transit centre; Zorana Mihajlovic, President of the Government of Serbia Coordinating Body for Gender Equality; Milana Rikanovic, Head of UN Women in Serbia and Barbara Chiarenza, Humanitarian Protection Manager for the Refugees Crisis at Oxfam at the opening of the Women's Corner. Photo: UN Women/Bojana Barlovac

“I crossed borders seven times, I was arrested, walked for a week without a break. Now I am here [in Serbia] for two months and I gave birth to a baby girl 11 days ago. This Corner means a world to us,” says Ferista, who left Afghanistan while seven months pregnant. She is one of the hundreds women who visit the Miksaliste refugee transit centre in the Serbian capital every day.

The Women’s Corner in Belgrade, a place where women refugees and migrants mingle with Serbian women to exchange experiences, feels like a best friend’s living room. Officially opened on 6 October with support from UN Women in Serbia and Oxfam, the Women’s Corner is part of the Refugee Aid Miksaliste transit centre, and offers a safe place for women to rest and take their mind off their long journeys and uncertain futures.

The Miksaliste transit centre opened its doors just over a year ago for migrants and refugees to receive food, clothes, medical assistance, hygiene products. More than 130,000 refugees and migrants have received assistance since its opening, serving up to 1,000 people a day in the peak of the refugee crisis.

Related News
18/05/2016
Civil society advocates forge recommendations ahead of World Humanitarian Summit in Istanbul
13/01/2016
UN Women assesses the needs of women migrants and refugees in Serbia and fYR Macedonia
21/01/2019
In the words of Nur Omar: “I’ve healed the wounds of war and feel more confident about my future”
22/09/2022
In Focus: War in Ukraine is a crisis for women and girls
17/03/2022
In Moldova, women mobilize to help refugees from Ukraine
END_OF_DOCUMENT_TOKEN_TO_BE_REPLACED