Serbia's orange SOS phone: A call that must be answered

UN Women in Serbia joined the global 16 days of Activism Against Gender-based Violence campaign by installing a giant interactive SOS telephone in Belgrade’s main square as a wake-up call for violence against women and girls. 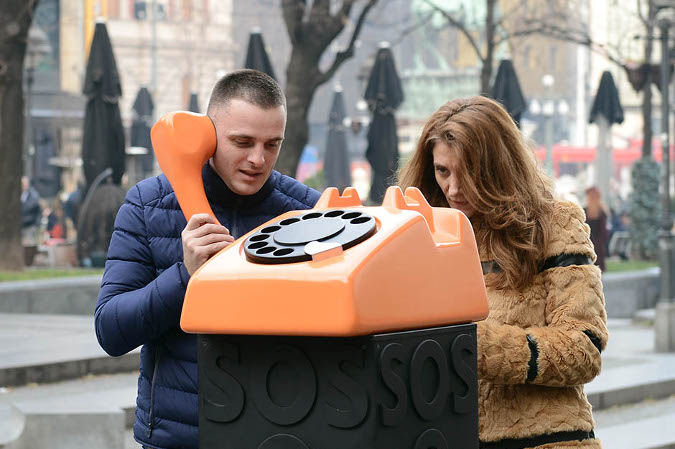 These and other alarming facts are conveyed through the SOS phone, which rings day and night throughout the UN”s global 16 days of Activism Against Gender-based Violence campaign, whose theme this year is “Orange the World: Raise Money to End Violence against Women and Girls.” The phone will ring from November 25, the International Day for the Elimination of Violence against Women, until the campaign’s end December 20, the International Day of Human Rights.

Aiming to raise awareness about violence against women and girls, this creative installation is an urgent call for change.

"Given the appalling statistics on gender-based violence, we wanted to take the issue out of closed circles and conferences and put it in the centre, right before people on the busiest square in the Belgrade. The phone will urgently ring there for 16 days, asking to be picked up, and will spread the statistics and call for action,” says Ms. Milana Rikanovic, Head of UN Women in Serbia.