In one of Asia’s newest countries, women are breaking gender stereotypes by participating successfully in local elections for Village Chiefs. 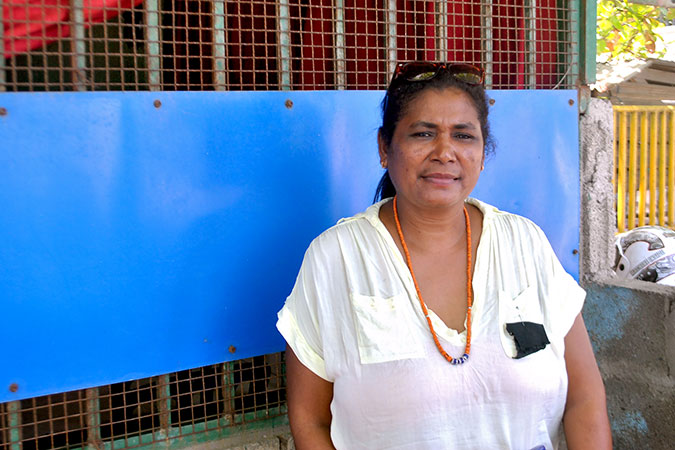 It’s midday in one of Dili’s busiest markets. A man pushes a food-cart selling an Indonesian-style soup with spicy meatballs. In an aluminum-roofed market stall, Barbara Garma Soares is shopping for football jerseys.

Soares is one of 21 women recently elected as Xefe Suku (Village Chief), in Timor-Leste’s nation-wide local elections held on 13 November. This is almost double the result from last election, in 2009, where only 11 women were elected from 442 villages.

Soares has travelled by mikrolet (mini-van) from her home in Suku Sau, a coastal fishing village two hours east of Dili, for one of her first official duties as a village chief: to buy uniforms for the village soccer team.

Soares explains how she applied the campaigning and leadership skills from the trainings: “I campaigned door-to-door. I didn’t make promises, but I said, if you choose me, we have to come together and we have to work together to develop our village. I can’t do it alone.”

Despite never having a woman lead their community as Village Chief before, the villagers of Suku Sau were won over by Barbara’s abilities.

The training workshops were part of a broader advocacy effort called “100% Hau Prontu” (100% I’m Ready), aimed at strengthening women’s political participation in Timor-Leste. Following the advocacy, three months before the election, the electoral law was amended, requiring each village to put forward a female candidate for the first time.

Laura Pina, Director of a local women’s group leading the advocacy effort, explains why the quota is needed: “It’s vital to shift community opinion, to show people that women are not just wives and mothers, but capable leaders at all levels.”

Timor-Leste is a patriarchal society. The home and family are mostly seen as the woman’s domain. It makes education and work harder to access for women, and roles like Village Chief are held at arm’s length.

Very high rates of violence against women is yet another obstacle for women’s advancement. It’s the most reported crime to police and Timorese women have described domestic violence as normal and sometimes, a daily occurrence [1].

The 319 women who participated in the leadership trainings were pioneers. They competed in the local elections along with 1,752 men. Graciana Da Silva is from Suku Laidohor, located one hour along the coast of Dili, near the border with Indonesia. As a single mother, she put herself forward as a candidate against all odds. “I was the only woman candidate up against six men. In the next village over, my friend was up against 10 men and it was the same in the next village,” she says. However, Da Silva wasn’t successful this time.

When asked why it remains so hard for women to participate in politics, she says attitudes towards women are the hardest to overcome: “People hold tightly to traditional culture. They don’t want to see women as leaders outside the home. Meanwhile men want to be in a position where they can influence people.”

Even in the most fundamental parts of life, like accessing transport, women find themselves at a disadvantage. “Only men ride motorbikes,” says Da Silva. “Most men don’t let their wives learn to ride. Men can campaign from Aldeia to Aldeia [small hamlets that make up a village]. Women have to wait for a man to take them—who has the time to do that?”

But attitudes can change, over time. The successful election of the 21 women impacts the administration of the country, where more than 70 per cent of the population lives in rural villages, isolated from the capital. The village council, the most conservative body until now, functions as the closest, most important and relevant system in people’s lives.

By mid-day, Barbara Soares starts her journey back to her village with the team’s soccer jerseys. She has many more responsibilities as the Village Chief awaiting her, but she is not alone. Soares has the support of her husband, who has taken on some of the care-giving work that women are traditionally expected to manage—an important reminder that changes in women’s roles require changes for men as well.

“He cooks, he washes clothes and helps care for our two children,” she says. “People are surprised when they hear this.”