The official opening of the Uganda Women’s Situation Room was held on 15 February 2016 at the Sheraton Hotel in Kampala. The Women’s Situation Room is an early warning and rapid response mechanism against violence arising before, during and after elections. Uganda’s presidential and parliamentary elections are scheduled for 18 February and elections for local government councils will run until 15 March.

Justice Julia Sebutinde, a judge in the International Court of Justice and one of the prominent women members of the Women’s Situation Room, thanked the conveners and supporters for providing this platform. She thanked UN Women and other partners for providing technical and financial support and applauded all Ugandans who have shown commitment to promoting the message of peace, especially among women and youth. 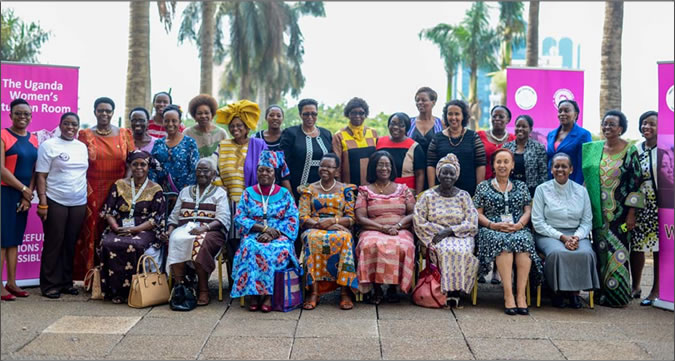 Members of the Uganda Women’s Situation Room, including eminent women of Uganda and Africa, at the official opening on 15 February 2016 at the Sheraton Hotel in Kampala. Photo: UN Women/Nadine Kamolleh.

Recalling that fear of real or perceived elections-related violence is a major deterrent for women’s political participation, UN Women Country Representative Hodan Addou welcomed the opportunity for Ugandan women to demonstrate that women are not just passive victims but are often determined and active stakeholders in ensuring that peace prevails in their country.

The Uganda Situation Room welcomes 10 eminent women from Uganda, a group of four elders and five women from African countries where similar projects have had successful impact towards peaceful elections, including Nigeria, Kenya, Ghana and Liberia. These women bring knowledge and experience from other parts of the continent and consult and dialogue with key stakeholders to ensure a peaceful transition. Consultations have been conducted with the Ugandan Inspector General of Police, candidates of political parties, the Electoral Commission, youth organizations and women’s groups.

The Women’s Situation Room has trained more than 500 women observers who have been deployed to 15 districts considered to be hotspots during the elections. Observers are expected to call the centre’s 24-hour hotline to report any incidents that may disrupt the peace during the elections and after polling. The reports will be analysed by a technical team and passed on for appropriate response.

Beyond the observers, any citizen is encouraged to call the hotline at 0800-333-111 to report any incidents likely to lead to conflict. Serious incidents will be verified and passed on to the Uganda Police Force or the Electoral Commission.