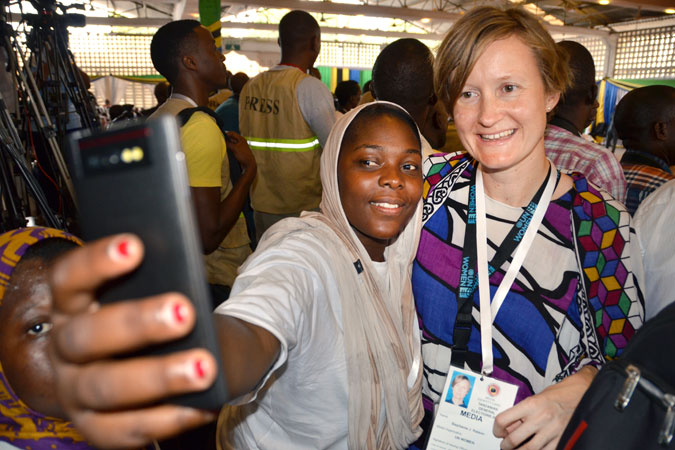 Stephanie Raison (right) takes a selfie with a fellow woman radio reporter and member of Tanzania Media Women’s Association among the press pack at the 2015 awarding of certificates by the National Electoral Commission to the president and vice-president elect on 30 October 2015. Photo: UN Women Tanzania
Stephanie Raison, 34, is the Communications and Advocacy Officer for UN Women in United Republic of Tanzania. After a career in international radio journalism and civil society advocacy, she joined UN Women as an Australian Volunteer for International Development in 2013.

Before I started working at UN Women I actually thought it would be a bit of a holiday compared to being a radio journalist. No longer would I have to run everywhere, work late nights and weekends. I imagined bureaucracy would slow me down and there would be huge budgets and lots of staff.

Well, my average day it’s not quite what I expected, but rewarding in ways I never imagined…

It’s a scorching Monday morning. About 10 minutes after we turn off the tarmac road my colleague and driver, Andrew, asks me if we are heading in the right direction. The GPS is blank and you can barely make out the bumpy path between huge boulders in this sculptured landscape. I’m sure we’ll meet someone soon—a human GPS.

A goat-keeper points us on the way, telling us to turn right at the school. Some 30 minutes later, we arrive at a busy marketplace. A familiar splash of orange and pink comes rushing over. It’s Mamma Marietha Maige, wearing her political party t-shirt with a UN Women khanga (a traditional colourful piece of cotton fabric) wrapped around her waist. Having served two terms as a special seats councillor (30 per cent of names on party lists must be reserved for women), Marietha is the first woman to run independently as a district councillor in her area. She hugs me excitedly and we leave the bustling marketplace.

After 45 minutes, we arrive at our destination—a gathering of her supporters. It feels like someone has rolled out the red carpet as a swirl of red sand rises into the air to greet us, kicked up from under the feet of more than 300 women who sing welcoming notes and move towards our car. They give us a warm embrace and the dancing begins. In a sea of hopeful energy, the women are thrilled to see one of their own standing up. I hurriedly try to capture the moment through my camera lens. Andrew helps me set up the tripod and roll out microphone wires for my audio recorder. 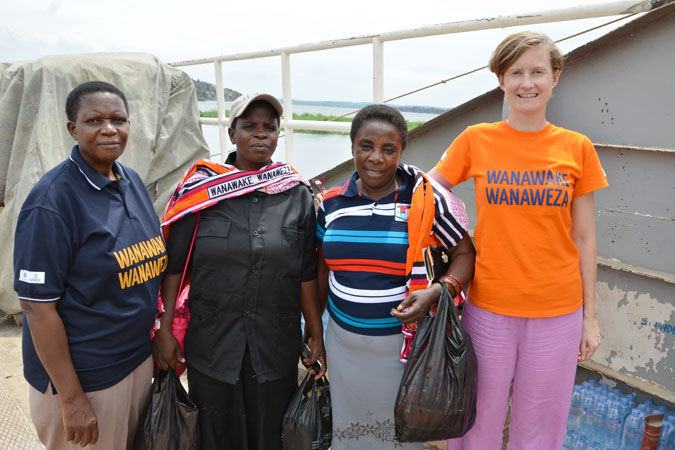 We’re under a tree, a typical meeting hall here. This glorious acacia provides shade, for which I’m relieved, but I’m frustrated by the sun that keeps playing hide-and-seek with the clouds. My fingers are working overtime adjusting camera settings.

Groups of women jump up enthusiastically and try to outdo one another with songs celebrating Marietha and women leaders. Even the men join in. I’m busy working my camera and adjusting recording levels on my recorder, that rise with the excitement.

Introductions are very much part of meeting procedures here, and people usually wonder who I am, so I’m asked to say a few words. I speak to the group in Kiswahili and a few words in their local language. As usual, a gasp follows and I can hear the crowd muttering to each other 'Wow! She can speak Swahili!' People clap and cheer. I am Australian, but by speaking their language, I gain people's trust more easily, which also enables me to take better photos as people relax and are also more willing to being interviewed.

But the real hero here is Marietha. Bravely she tells the gathering that she and her supporters are being targeted and threatened with violence. Competition is fierce. Some male candidates don’t want a local woman winning and resort to threats of violence against Marietha and her supporters.

We head to her home so I can interview her more in-depth. There, at her simple house surrounded by trees with a few chickens pecking at the dirt, she introduces me to her children and relatives. I hug her as she weeps while showing me her husband’s grave.

Across Tanzania widows like Marietha experience discrimination. Those bold enough to stand for election face additional threats and violence. I’ll report these threats to election monitors who will call her to follow-up. I record our interview in Swahili. Andrew helps when I don’t understand. We decline the kind offer for lunch. Andrew is getting nervous about reaching our next destination before dark.* 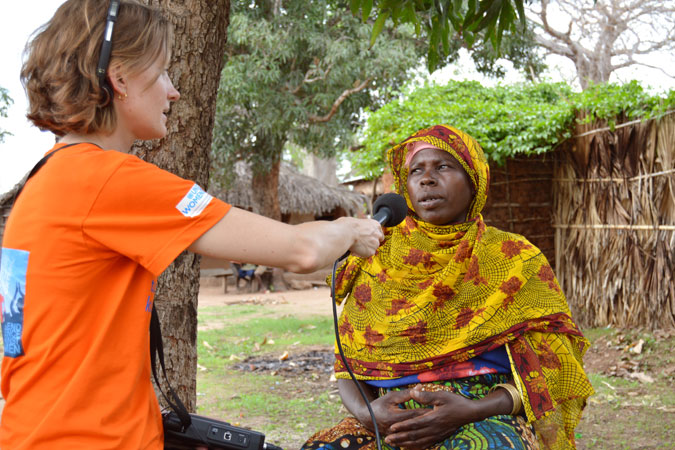 Interviewing in Tanzania requires patience. Many women are not used to giving an opinion and some view questions with suspicion. I need to pull out my best journalism tactics to make people feel comfortable.

People often talk around issues here, which is frustrating when I have my recorder in-hand and am trying to document the impact of UN Women’s work without my batteries running out. Interviews that could take five minutes can take an hour because of the need to ask questions in different ways to get specific answers.

Finding a quiet and confidential interview location is also a challenge. Often just after I’ve hit the ‘record’ button, a milling machine will come to life nearby or someone will decide the whole village needs to hear the latest bongo flava (local pop music) song. 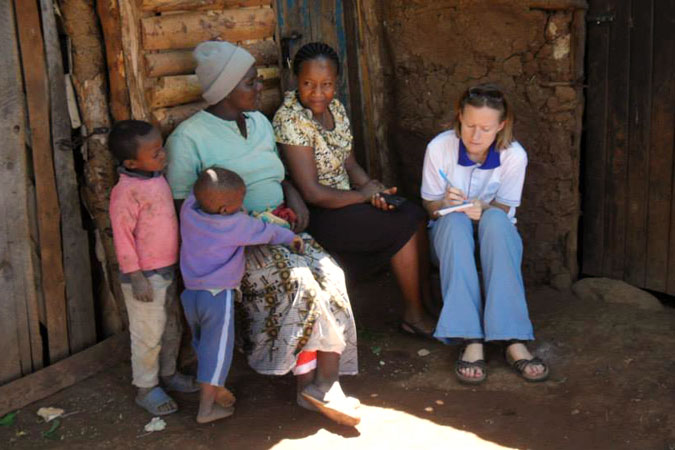 Traditionally, Tanzania women—particularly young women—speak very quietly, especially around elders. I’m constantly asking people to speak up while trying to turn my own volume down. If I don’t, I may anger or alienate people—not good when you’re trying to photograph or interview them.

But, even with the softest of voices, the stories hit me hard. I often lie awake at night imagining these women, hoping they’re okay. I even feel overwhelmed at trying to tell their stories, yet just ‘telling’ without knowing if I’m able to make an impact.

Almost three years after joining UN Women, I’ve learned that the hours are sometimes just as long as they were in my journalism days. The paperwork doesn't slow you down, although sometimes the power going off when you’re at the photocopier does… 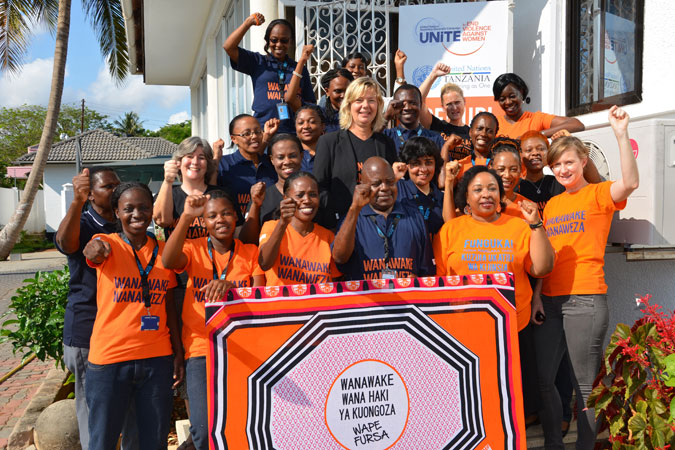 Regardless, the UN Women journey continues. I work closely with all my colleagues and seeing how hard they work motivates me to do my best to document their results. There is still so much to do and so many stories to share. Every woman has the right to be heard. And it’s been my honour, to do my part to amplify their voices.

*Marietha was not elected, after opponents spread rumours she had died, but she will continue to get training from UN Women and plans to run again in 2020.