“CSW60 is the first test of our resolve” — Executive Director

Speech by UN Under-Secretary-General and UN Women Executive Director Phumzile Mlambo-Ngcuka at the opening of the 60th session of the Commission on the Status of Women on 14 March, 2016

Chair of the Commission on the Status of Women, H.E. Mr. Antonio de Aguiar Patriota,
President of the General Assembly,
Secretary-General of the UN,
Vice President of ECOSOC,
Ministers,
Women and civil society representatives,
Representatives of the Youth CSW,
Colleagues, ladies and gentlemen.

This Commission is the largest and most critical intergovernmental forum, with diverse women’s voices that can influence the road to 2030. 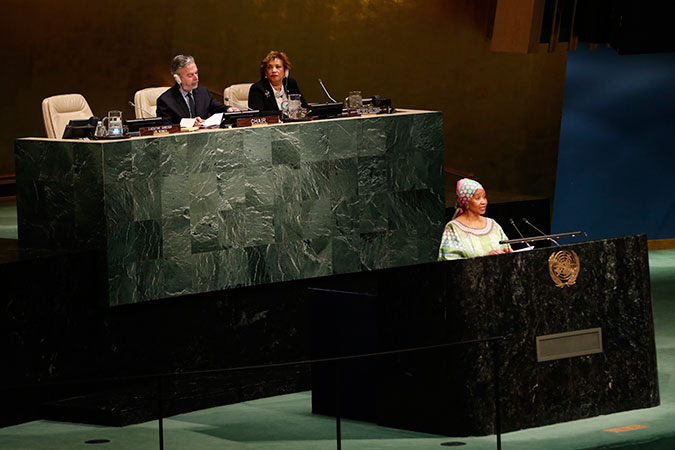 UN Women Executive Director Phumzile Mlambo-Ngcuka speaks at the opening of the 60th session of the Commission on the Status of Women. Photo: UN Women/Ryan Brown

Please allow me to warmly thank the Chair of CSW and his Bureau for all their work in preparing this complex event, and I also thank the UN Women team for the meticulous management of the arrangements.

This session marks the beginning of the count down to 2030 to the future we want, in which no one is left behind. A future in which there is substantive gender equality.

This is not a moment to reopen and renegotiate what was already agreed to at the historic General Assembly of 2015.

Excellencies, the Agenda you adopted is bold, ambitious and transformational. Now we gather to seek implementation modalities that match this bold agenda, where there can be no “business as usual”.

As we acknowledge progress made, especially in the last 20 years, we also note that for many women and girls at risk, that change is not happening fast enough. For example, it is forecast that it will take 50 years to achieve parity in political participation, and 118 years for true pay equality between women and men at the current pace of change. To break these trajectories and achieve Planet 50-50 by 2030 will take dramatic steps and the adoption of business un-usual by all of us.

This session should benefit from the historic efforts and experience of millions of women all over the world that have brought us here, and from the contribution of many Member States.

It will also benefit from the force and inspiration of younger generations who are weighing in on this agenda with a clear eye to the future they will inhabit.

I am proud to announce that the first Youth CSW met for two days to discuss the implementation of the SDGs. We are delighted to have a youth representative with us here today who will make a brief statement. We recognize the need to include and engage youth with greater seriousness and we have just launched our Youth and Gender Equality Strategy.

Thank you to the Envoy on Youth, Mr. Ahmad Alhendawi, for his support and all our partners.

There are 1.8 billion young people aged 10-24 years old in the world—the largest youth population ever. Agenda 2030 is largely about them and for them.

The CSW youth have called for education about gender equality and the rights of women and girls to start in early childhood with formal, non-formal and informal education.

We know that in order to bring the new agenda to life, we need to get closest to those who are most disadvantaged. Governments cannot deliver alone on their strong commitments. Collaboration with civil society and women’s organizations is key. It also means that greater support and protection of civil society is needed to ensure greater political space and capacity for them. To implement this Agenda, the support of the private sector is also needed.

Just last week on International Women’s Day, we paid our last respects to a defender of women’s rights, Berta Cáceres, feminist activist, environmentalist, defender of indigenous and all human rights, who was shot dead in Honduras on 3 March. She is one of the latest victims of the fight to assert different values against the power structures that could compromise Agenda 2030. She paid the highest price.

Globally, there are intense hardships, with extensive population displacement, extreme violence against women and girls, and widespread instability in many regions. The extraordinary challenges, such as the current refugee and migration situation, require us to work together to address their root causes in countries of origin as well as in countries of transition and destination. This is a new challenge on which we need to collaborate and find new and sustainable ways of responding.

Despite these many challenges, CSW60 has to be a positive moment. It has to be as positive as we were at the adoption of Agenda 2030 last year. That was arguably one of the finest moments for the UN and the global community, when all other differences were set aside, in the interests of all of humanity and for women and girls everywhere.

What was agreed in the 2030 Agenda calls on us to change the way we live, do business, grow food, value motherhood, engage and protect girls and boys, communicate, and respect and recognize the rights of those different from the mainstream in their sexual orientation or in any other way.

This is the moment to capitalize on all these positive commitments. It is a moment for all of us to ‘Step it up’ with Agenda 2030 plans that are decisive, implementable and transformative. For example, we are launching a partnership to take action on barriers to women’s economic empowerment through the newly-announced Secretary-General’s High-Level Panel on Women’s Economic Empowerment. This is jointly led by a Head of State and industry CEO. The panel includes participation of trade unions, women and civil society organizations, academics, IMF and the World Bank, with critical support from the UK Government.

Further, we are collaborating to implement Flagship Programmes that have the capacity to transform the lives of women, girls and communities and are scalable at global, regional and national level. These are our efforts to reach those furthest behind, who need our help most.

Goal 5 and its targets are the best example of how universal and relevant this agenda is for those left behind. Goal 5 gives us the framework to: end all forms of discrimination, including tackling discriminatory laws; eliminate all forms of violence against women and girls, including harmful practices like child marriage, FGM and honour killings; recognize the value of unpaid care and domestic work; ensure substantive increase in women's participation in leadership and decision-making; ensure universal access to sexual and reproductive health and reproductive rights in accordance with the Programme of Action of the International Conference on Population and Development and the Beijing Platform for Action; and make reforms to give women equal rights to economic resources, for example to close the gender wage gap, which globally is at 24 per cent. This week we will launch a campaign to close the wage gap. Goal 5 also calls us to enhance use of enabling technology, in particular ICTs. This was stressed by our youth delegates along with the importance of closing the digital divide and the positive use and accountability of social and traditional media.

Our youth delegates also underlined meaningful engagement of women in climate justice, migration, and the implementation of Security Council resolution 1325 on Women, Peace and Security.

We are also taking advantage of each of the 17 goals of Agenda 2030, as each goal is for women and girls. In each goal we can reflect concrete actions that focus on supporting those who need us most.

In addition to bringing to life Goal 5 and ensuring all goals work for women, we have identified enablers for gender-responsive implementation: effective and inclusive national institutions that implement non-discriminatory laws and policies; effective participation of women’s and civil society organizations, because evidence shows that autonomous feminist organizations that advance women’s rights are the most critical factor in the implementation of gender equality policies and support monitoring and accountability. We need gender-responsive data collection to support monitoring of the implementation of the 17 goals and accountability processes. Age and sex-disaggregated data are critical. I am pleased to announce that UN Women is launching the Global Database on Violence against Women later today.

Last, and mission critical, is a significant increase in investment to close the gender financing gap.

The pace of change we have seen over the decades is directly correlated to the investment we have made. Where we made good investment in women and girls, the return is high and life changing. Nationally, starting with national budgets, and internationally, a change in funding, and a change in favour of increased work with women’s organizations will mean a change in effectiveness and good results.

Hesitation that dogs us in relation to closing the gender funding gap sets us on the wrong path in an agenda whose success depends on gender equality and women’s empowerment.

To leave no one behind, the bulk of our investment must secure clear wins, not just involvement, especially in: rural development and agriculture; public health and education; family planning services; water and sanitation; social protection; scalable programmes for the economic well-being of women and girls; ending violence against women and girls and respect for the rights of women and girls with access to justice.

Those who are being left behind can be easily identified: they do not have these basic services.

Those left behind and experiencing stubborn intersectionality and cumulative disadvantage are likely to include people living with disabilities, indigenous and rural communities, migrants and refugees, LGBTQI communities, and adolescent girls and older women. In Agenda 2030 you have decided to reach them. CSW60 is the first test of our resolve and an opportunity to make a historic shift.

Excellencies, I thank you for your dedication and I ask you to hold fast to the principles that inspired the vision of Agenda 2030 in negotiating the agreed conclusions.

We know we must engage not only our traditional partners, but also involve men and boys in large numbers, and reach out beyond our comfort zones to those with whom we may not agree or sympathize. We want to be encouraged by the sheer volume of different interest groups that coalesce around this Commission. This clearly evidences the level of interest in the opportunity and potential of this moment, together with the total of more than 450 events in and around the Commission.

Excellencies, in your hands is a once-in-a-lifetime opportunity to end poverty and transform gender relations irreversibly for the next generation, making the world a better place for all.

Let us seize the day!

And now, may I invite Ms. Vanessa Anyoti, representing the CSW Youth Forum, to make a short statement.