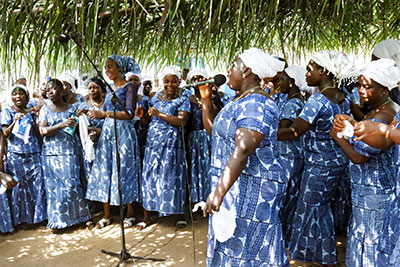 In the small fishing village of Little Bassa, located in the southern region of Liberia, hundreds of local women leaders under the UN Women-supported Peace Hut Initiative danced in excitement as they received UN Women Executive Director Phumzile Mlambo-Ngcuka and her delegation on 27 February.

She visited Little Bassa to rededicate the women’s Peace Hut and to hear first-hand about their experiences working as peacemakers and peacebuilders. A powerful platform for women’s leadership and economic empowerment, the Peace Hut was hard-hit by the Ebola Virus epidemic, leading to the suspension of most activities during the course of the outbreak, which lasted for over a year. 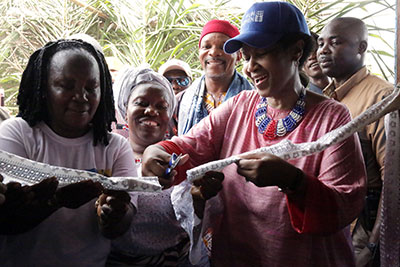 Speaking on the situation during the UN Women Executive Director’s visit to Little Bassa, Liberia’s Minister of Gender Children and Social Protection Julia Duncan-Cassell highlighted how after the Liberia civil war, women worked hard and improved their status but she regretted that the achievements by the women were swept away due to the Ebola outbreak.

During the Ebola Virus outbreak in Liberia, many women were pushed out of business due to the closure of markets as part of strategies to reduce transmission of the virus. Their savings plummeted and many could not pay back loans they had borrowed to expand their business.

“I took a loan from our Savings Club but I was not able to make enough business because at that time things were difficult, so I spent the money on looking after my family,” explained Victoria Harris of the Little Bassa Peace Hut. 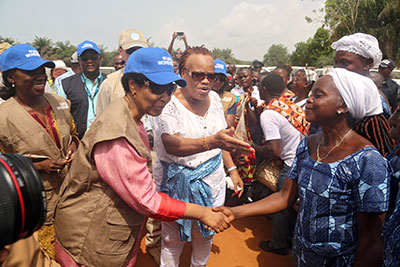 Women in Little Bassa spoke with UN Women Executive Director Phumzile Mlambo-Ngcuka about the impact the Ebola Virus had on the village. Photo: UN Women/Stephanie Raison

Today, the challenge of recovering from the impact of the Ebola outbreak is being tackled through interventions by UN Women working with the Ministry of Gender, Children and Social Protection.

“We the women of Little Bassa say thank you to UN Women and the Gender Ministry for helping to empower us. Before Ebola came, our businesses were alright, but this sickness put us behind. Right now we need help. We want a fish-processing and storage centre to help add value and preserve our goods,” explained Mallah Gueh, leader of the Little Bassa Peace Hut.

The Executive Director saw some of the products made by the women through skills acquired at the UN Women-supported empowerment centres at the Peace Huts across Liberia. The women asked her and other stakeholders visiting them for further skills training and access to loans, as well as support for women’s leadership, to help increase their participation in governance. 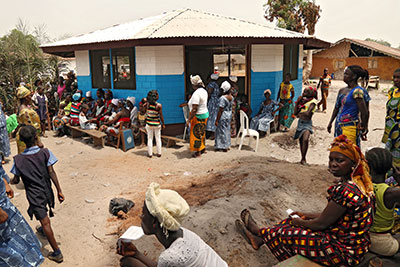 The Peace Huts are a safe space where women of the village come together to mediate and resolve community disputes. Photo: UN Women/Stephanie Raison

As part of her visit to Liberia, the UN Women Executive Director engaged with several stakeholders including donors, the UN Country team, the private sector and the government to see how they can collaborate to address the concerns raised by the women and respond adequately to the overall situation of women and girls in Liberia.

In her message to the women leaders of the Peace Hut, Ms. Mlambo-Ngcuka congratulated the women for their resilience during the Ebola Virus outbreak and for the critical role they played in eliminating the virus. 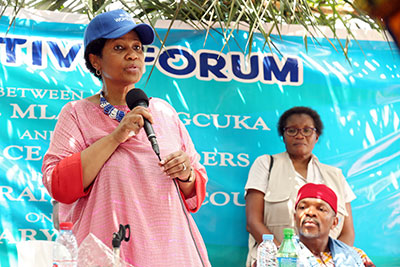 “I want to salute you for the courage that you have shown, the courage that I am able to talk about when I speak to other women who are down. I am able to say to them: ‘look what has happened to the women of Liberia and see where they are today’, said the Executive Director. “We want more for you. We feel that the peace dividend has to be richer than what it is today. And part of our ongoing work is able making sure that the peace that you gain is not only sustained but that your life is materially better.”

Liberian women have earned global fame for their courage and their role in ending the country’s civil war and for being actively involved in the response and caregiving efforts during the recent Ebola outbreak.

Ms. Mlambo-Ngcuka said she was inspired by the audacity and resilience of Liberian women and was confident they will rise beyond the impact of the Ebola virus outbreak as well as mobilize themselves for greater leadership roles ahead of the 2017 Liberian general and presidential elections.

From conflict resolution to prevention: connecting Peace Huts to the police in Liberia