Meeting concludes with agreement on foundations to accelerate action for all women and girls. 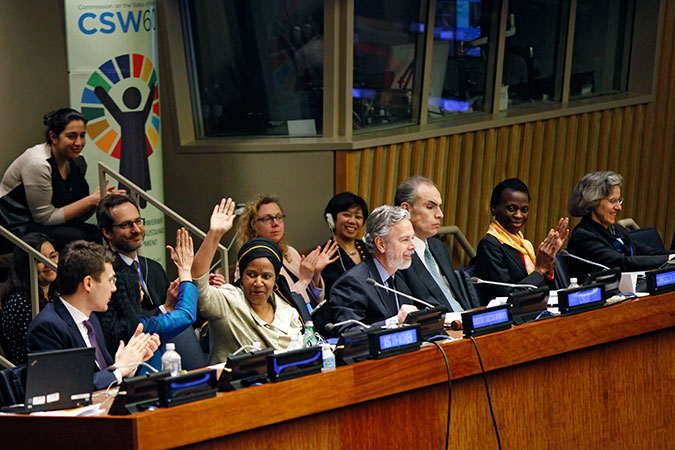 New York — The 60th session of the UN Commission on the Status of Women concluded today with UN Member States committing to the gender-responsive implementation of Agenda 2030. A set of agreed conclusions called for enhancing the basis for rapid progress, including stronger laws, policies and institutions, better data and scaled-up financing.

The Commission recognized women’s vital role as agents of development. It acknowledged that progress on the Sustainable Development Goals at the heart of Agenda 2030 will not be possible without gender equality and the empowerment of all women and girls.

UN Women Executive Director Phumzile Mlambo-Ngcuka welcomed the agreement and the commitment of UN Member States to make the 2030 Agenda, adopted last September, a reality in countries around the world. She said: “Countries gave gender inequality an expiry date: 2030. Now it is time to get to work. These agreed conclusions entrench and start the implementation of a gender-responsive agenda 2030 with which we have the best possibility to leave no one behind.”

The #CSW60 draft agreed conclusions have been ADOPTED! Congratulations to all delegates. pic.twitter.com/XxFEZ8eE08

Growing global commitment was already in evidence with a record number of more than 80 government ministers from around the world attending the Commission. Around 4,100 non-governmental representatives from more than 540 organizations participated as well, the highest number ever for one of the Commission’s regular annual meetings. 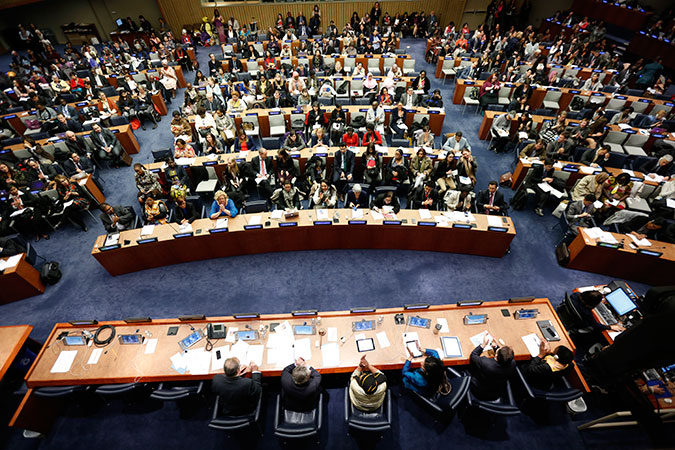 A wide view of the room during the closing plenary meeting of the 60th Session of the UN Commission on the Status of Women. Photo: UN Women/Ryan Brown.

The agreed conclusions urge a comprehensive approach to implementing all 17 Sustainable Development Goals through thorough integration of gender perspectives across all government policies and programmes. Eliminating all forms of gender-based discrimination depends on effective laws and policies and the removal of any statutes still permitting discrimination. Temporary special measures may be required to guarantee that women and girls can obtain justice for human rights violations.

The Commission endorsed significantly increased investment to close resource gaps for achieving gender equality and the empowerment of all women and girls. Funds should be mobilized from all sources, domestic and international, ranging from fulfilling official development assistance commitments to combatting illicit financial flows that shortchange public resources for gender equality.

Timelapse: #CSW60 delegates are in the final hour of negotiations on the agreed conclusions. pic.twitter.com/qmahAjP1Gt

With humanitarian crises and other emergencies disproportionately affecting women and girls, the Commission underlined the imperative of empowering women in leadership and decision-making in all aspects of responding to and recovering from crisis. On the eve of the World Humanitarian Summit, it stressed prioritizing women’s and girls’ needs in humanitarian action and upholding their rights in all emergency situations. Every humanitarian response should take measures to address sexual and gender-based violence. 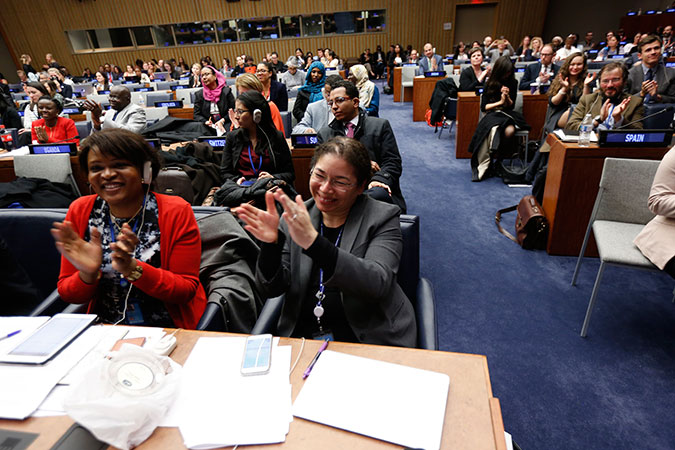 CSW60 delgates applaud as an agreement is announced during the closing plenary. Photo: UN Women/Ryan Brown.

Members of the Commission united behind ensuring women’s equal participation in leadership at all levels of decision-making in the public and private spheres, encompassing governments, businesses and other institutions, and across all areas of sustainable development. Depending on different circumstances, this may involve establishing temporary special measures, setting and achieving concrete benchmarks and removing barriers to women’s participation.

Given the major contributions to Agenda 2030 of civil society, including women’s and community-based organizations, feminist groups, human rights defenders and girls’ and youth-led organizations, the Commission welcomed open engagement and cooperation with them in gender-responsive implementation. It emphasized fully engaging with men and boys as agents of change and allies in the elimination of all forms of discrimination and violence against women and girls.

To guide systematic progress towards gender equality and women’s empowerment throughout the 2030 Agenda, the Commission stressed enhanced national statistical capacity and the systematic design, collection and sharing of high-quality, reliable and timely data disaggregated by sex, age and income. Members also agreed to bolster the role of national mechanisms for women and girls in championing their equality and empowerment.

Relief & celebration among delegates as #CSW60 agreed conclusions have been adopted after extensive negotiations! pic.twitter.com/wwV9o3oLyv