(15 March 2016, New York) The inaugural meeting of the first-ever High-Level Panel on Women’s Economic Empowerment kicked off today during the 60th session of the Commission on the Status of Women. Operating under the aegis of the UN Secretary-General, it intends to put women’s economic empowerment at the top of the international agenda, including by defining actions to speed up progress under the 2030 Agenda for Sustainable Development. A global consultation will take place during the continuation of the meeting on 16 March. 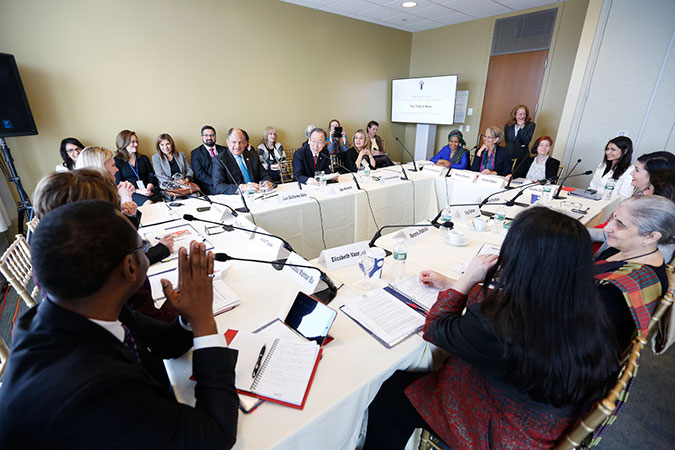 Simona Scarpaleggia, CEO of IKEA Switzerland and a panel co-chair, said: “I firmly believe that there is huge potential that could be unlocked simply by valuing and empowering women. The energy, the power and creativity of women is badly needed—not only to make this world a better place, but to enable it to survive in the years to come. It is only by engaging the abilities of both women and men working together in partnership that the right steps can be taken towards building a sustainable world. This means the voices of both men and women must be heard at all levels of decision-making.”

Investing in women’s economic empowerment is intrinsic to achieving the 2030 Agenda. It leads directly to gender equality, poverty eradication and inclusive economic growth. Yet despite important progress, large gender disparities remain for women in both economic opportunities and outcomes, across all countries and regions.

“Economic empowerment of women means recognizing and valuing fairly all women’s work, for them to achieve their full potential and to contribute to national development,” said President Luis Solís of Costa Rica, the other panel co-chair.

The panel will produce two reports for the UN Secretary-General. Lead author Professor Laura Tyson will draw on rigorous evidence and broad-based consultations to highlight good practices and provide action-oriented recommendations. The process aims to promote women’s leadership in driving economic growth, and galvanizing commitment by governments, the private sector, the United Nations system and other stakeholders.

The Secretary of State of the United Kingdom, Justine Greening, said: “I am hugely proud to be part of the first-ever meeting of the UN High-Level Panel on Women’s Economic Empowerment, which marks a major step forward in the battle to close the gender gap in economies around the world. We now need to work hard to make sure it delivers real change for the world’s poorest women. Women's economic empowerment is not just about financial independence and basic human rights; it’s also a major lever we can use to boost the global economy, because a country cannot successfully develop when half its population is left behind.”

Other members of the panel include the leaders of the International Monetary Fund, World Bank Group, UN Women and a diverse range of eminent gender equality actors, economics experts, academics, trade union leaders, and business and government representatives from all regions.

The Panel Secretariat is hosted by UN Women, backed by the Government of the United Kingdom and the World Bank Group. UN Women Executive Director Phumzile Mlambo-Ngcuka said: “UN Women welcomes the panel’s strong commitment to work together to provide thought leadership and accelerated action that irreversibly improves economic outcomes for women. We look to all panelists to lead and foster this with governments, development partners, the private sector and civil society.”

The world can’t wait for women’s economic empowerment. Here’s why the @UN must turbocharge this agenda today: https://t.co/oyeNhub9Cs #CSW60

Through a public consultation on 16 March 2016 at UN Headquarters, a broad array of other actors, many active in advancing women’s economic empowerment, will contribute views on the panel’s work. Consultations will continue in various fora for several months, at the national and regional levels, and around specific themes.

A full list of panel members can be found here; to join a discussion on the panel, go here: https://www.empowerwomen.org/en/community/discussions/2016/03/have-your-say-un-secretary-general