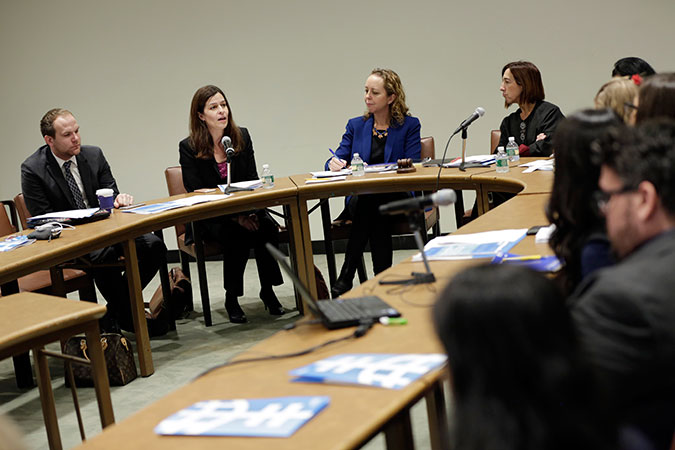 Participants at the symposium to discuss the Global Gender Equality Constitutional Database on 6 May in New York. Photo: UN Women/Ryan Brown

On 6 May, professors and students from the University of Chicago Law School, University of Pennsylvania Law School, Columbia University’s School of International and Public Affairs, the University of Milan, shared their experiences in utilizing UN Women’s revised Global Gender Equality Constitutional Database (GECD) at a symposium co-hosted by UN Women and the UN Office of the High Commissioner for Human Rights (OHCHR).

Students unveiled their methodologies, which involved country visits and analyzing various constitutions throughout their research and use of the database. Students also presented recommendations for individual countries in incorporating international law and helping women realize their rights.

"It's a great tool for me moving forward to think about how law and how language affects everyone on a much wider scale. It [the database] shows you not only how you can interpret the language, but also the types of constraints women on the ground face given the language and the types of benefits they receive from the language," said Salwa Shameem a public policy student at the University of Chicago, who has been using the database since last September. 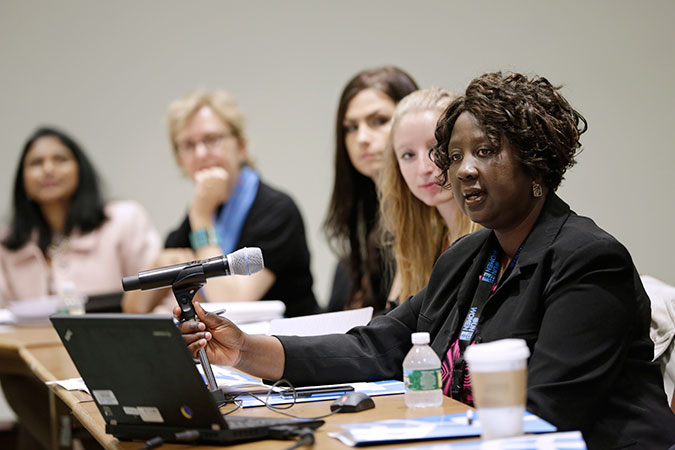 Beatrice Duncan speaks at the symposium to discuss the Global Gender Equality Constitutional Database on 6 May in New York. Photo: UN Women/Ryan Brown

She further added that the database functions as a tool for women to challenge the existing language and use it as a tool in their own advancement.

While other websites exist that collect constitutions from around the world, the GECD is searchable and analyses constitutions specifically from a gender perspective. UN Women first designed and launched the database in December 2013, with support from the Government of Sweden.

“This Constitutional Database is interesting and extremely useful to law-makers, gender activists, constitutional, academic and other human-rights-interested individuals. I wish I had had this when we were drafting the Constitution of Rwanda. It would have been easier and more gender-sensitive,” said Tito Rutaremara, Senator and former chair of the 1994 Constitutional Review Commission, Republic of Rwanda.

With extracts from the constitutions of 194 countries, the database has since been revised and the categories have been expanded—now featuring 24 categories and 19 subcategories, including: affirmative action; national/local level quotas; participation in public life; sexual and reproductive health; and sexual orientation and gender identity. The database also includes both English and original language versions of constitutional provisions in 75 national languages. 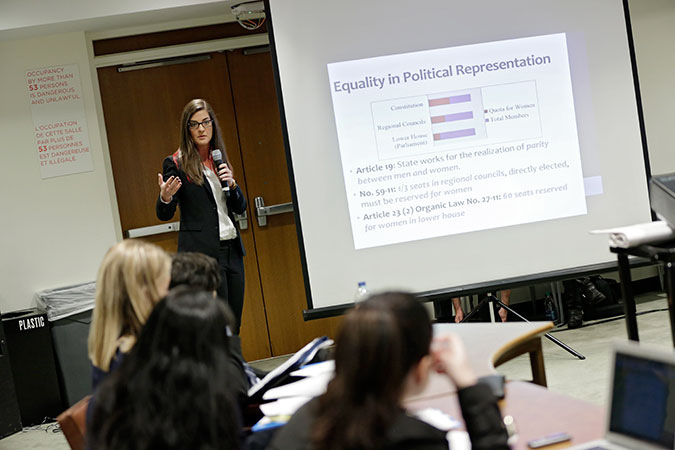 A student from University of Chicago Law School made a presentation on the Global Gender Equality Constitutional Database on 6 May. Photo: UN Women/Ryan Brown

"We cannot estimate the critical role that constitutional development and interpretation by the courts will play in the advancement of gender equality in the light of fact that constitutions set the stage for both political and legal discourse," said Begoña Lasagabaster UN Women Chief Leadership and Government during the meeting.

"We will see this symposium as a strategic opportunity to assess how we can individually and collectively ensure that constitutions and their ongoing revisions impact positively on the development discourse in a manner that will benefit women and girls," she added.

Constitutions are the foundation of State accountability. State Parties commit “to embody the principle of the equality of men and women in their national constitutions” [1] as part of their domestic legal obligation upon ratifying the Convention on the Elimination of All Forms of Discrimination against Women (CEDAW). Having women’s rights embedded in the national constitution provides a powerful tool to eradicate gender-based discrimination and advance women’s rights in all spheres. 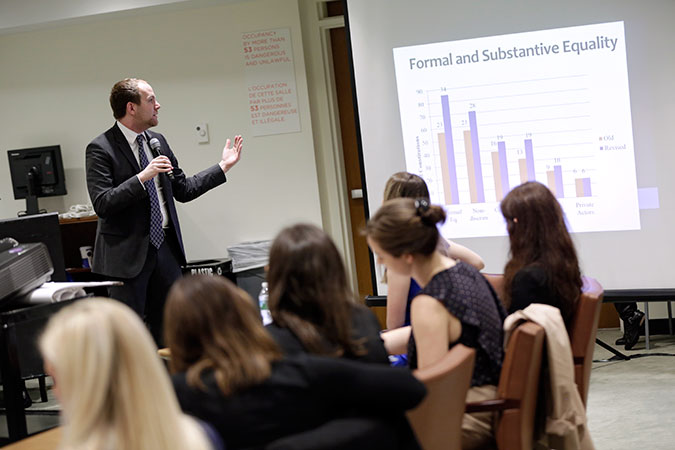 Dylan Cowart, a law student at the University of Chicago, speaks at the symposium to discuss the Global Gender Equality Constitutional Database on 6 May in New York. Photo: UN Women/Ryan Brown

"It's really important as advocates, and especially as a male advocate that we have these important conversations about what rights all people have, but how the specific context on the ground is disparately impacting women," said Dylan Cowart a law student at the University of Chicago. "That's not a conversation that can occur without a really robust knowledge and understanding of what constitutional provisions exist, and what laws are on the ground."

Related News
15/08/2022
Statement: ‘Meticulously constructed policies of inequality’ – Afghanistan one year on
15/08/2022
In focus: Women in Afghanistan one year after the Taliban takeover
25/07/2022
Press briefing: The situation of women and girls in Afghanistan
13/07/2021
Press release: UN Women presents ‘A Force for Change’, an art exhibition and auction featuring work by 26 Black women artists, benefitting Black women
14/11/2017
Standing up for survivors in the Shari’a court every day: Ayah al-Wakil is determined to leave no woman behind
END_OF_DOCUMENT_TOKEN_TO_BE_REPLACED