Steering the path to leadership for women police officers in Albania

When Officer Anila Popa became the first and only woman in Albania leading a police commissariat several months ago, her colleagues doubted she would last in this role. Despite the patronizing environment surrounding her, she was determined to succeed in this position that brought her back to her hometown. Ms. Popa leads the Librazhd Commissariat in Eastern Albania, where her father once worked 30 years ago. 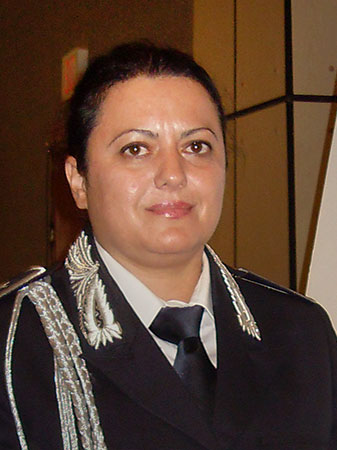 Since joining the police in 1997, Ms. Popa has faced many challenges. “As a young woman in a masculine environment, there was going to be harassment. At the time, only a few women were part of the police force. These challenges, however, have only made me stronger. Now my male colleagues respect me,” she says.

A mother of two boys, Ms. Popa was able to learn French during her night shifts and attended a police school in France, where she also completed a Master’s degree.

“In my daily job I try to be attentive and reflect on my decisions, especially since I find that a woman’s mistakes are criticized twice as much as the mistakes of men,” says Ms. Popa, who after six months as the Chief of Librazhd Commissariat has gained the respect of initially skeptic community and colleagues.

She received the new assignment in December 2015, after completing an eight-month training on strengthening police women’s leadership skills, provided by the ASP in collaboration with the International Criminal Investigative Training Assistance Program (ICITAP). UN Women and ICITAP jointly funded, promoted and conducted the first training and mentoring programme in 2015, to bolster women police in command roles by honing their operational leadership and management skills.

Martha Bacile Findlay, Advisor to the Albanian State Police, says it is part of a series of initiatives that help empower women police officers. “The programme is trying to overcome organizational deficiencies that have excluded women from operational command in the past… [Women] have previously been restricted to administrative roles once they reach a certain rank,” she says. “These restrictions are of a cultural nature and mirror similar situations in other parts of the world in terms of the integration of women.”

Of the 16 women that applied for the first training programme, five successfully completed it. Three of them have already taken on new leadership positions, including Ms. Popa, who now is supervising 50 police officers in Librazhd, a town with a population of 62,000 in the centre of Albania. 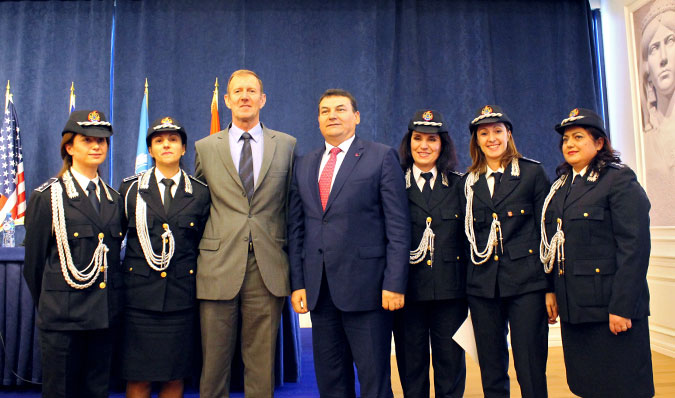 Anila Popa (far right) was one of five women police officers to graduate from the ICITAP-UN Women training in 2015. They stand alongside Bill Morrell, Strategic Police Advisor, ICITAP Albania (centre-left) and the Director of the Albanian State Police, Haki Çako (centre-right), who is also a HeForShe champion.Photo: UN Women/Besnik Bak

The Director of the Albanian State Police, Haki Çako, highlights that “promoting diversity and gender equality is very important not only for successful and effective policing, but also for creating an environment where everyone feels appreciated and encouraged to contribute to their full potential in support of the community.” Mr. Çako stresses that this initiative is an important tool to eradicate the notion that this is solely a male profession.

There has been a slight increase of women in Albania holding leadership roles in the police force, from 6.6 per cent in 2012 to 9.9 per cent today. Overall, 1,468 women now represent 14 per cent of the Albanian State Police, up from 9 per cent in 2011. Recruitment policies were modified in 2011, requiring 50 per cent of new cadet recruits to the Police Academy be women until 2014.

UN Women has provided support to the Albanian State Police in implementing its 2011 Diversity Plan of Action, which focuses on integrating a gender perspective and developing policies to increase women’s participation as leaders and decision-makers in the force. The Governments of Sweden, Norway and Austria have been strong programme donors and supporters of these efforts.

The plan comes on the heels of other gender-sensitive policy changes, notes UN Women Representative in Albania, David Saunders. “The Albanian State Police adoption of a progressive policy against harassment and sexual harassment in the workplace illustrates their ongoing commitment and progressive approach to gender equality. This follows on their commitment to promote women into field command roles and implementing 50:50 women-to-men recruitment.”

The leadership training programme is being replicated in 2016 with 29 senior women police officers participating. Divided into two groups, the first will be certified by the end of June and the second group will start in autumn. UN Women is also going to support the training of male mentors as part of the programme.

Related News
04/05/2022
Ukraine: New UN Women and CARE report highlights disproportionate impact of the war on women and minorities
23/10/2018
From where I stand: “The adoption of the National Action Plan on UNSCR 1325 is only the beginning”
18/07/2017
In Albania, elections herald historic increase in number of women MPs
05/05/2016
Local budgets in Albania respond to community feedback
01/04/2016
Kosovo* women police association to elect new board
END_OF_DOCUMENT_TOKEN_TO_BE_REPLACED