Lack of economic resources and opportunities are driving Ethiopia’s young women to migrate, often through illegal brokers, as domestic workers in the Gulf countries. They face risks of exploitation, trafficking, poor working conditions and sexual harassment in the destination countries. A programme by UN Women and ILO has initiated ‘Community Conversations’ to ensure safe migration, and raise awareness about the Domestic Workers Convention.

Five years ago, when Meliya Gumi’s two daughters, Gifty* and Chaltu,* aged 16 and 18, migrated to Dubai and Qatar respectively, as domestic workers, everyone thought they were moving towards a better future.  As a widowed mother of eight with little resources, living in the village of Haro Kunta in the Oromia region of Ethiopia, Gumi had a difficult time making ends meet. 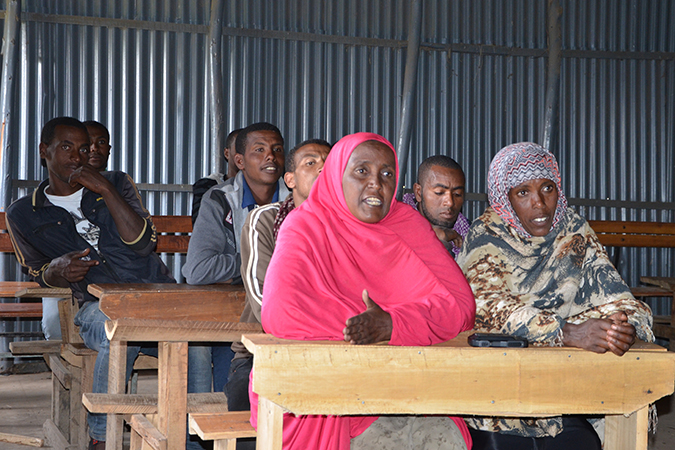 Meliya Gumi (front left) contributes ideas on how to prevent irregular migration at one of the Community Conversation sessions in her village. Photo: UN Women/Fikerte Abebe.

Gumi’s daughters made it to their destination countries through illegal brokers, but found themselves trapped in poor working conditions with no benefits or protection. They send some money to Gumi every now and then, which supplements her meagre income.

“My wish is to see my daughters come back home safe and I would never want them to leave again, as long as they have some income to survive on,” says Gumi, who is now one of the 22 active participants of the “Community Conversations” initiative in her village, supported by UN Women and International Labour Organization (ILO). The Community Conversations aim to prevent “irregular migration”—exploitative or illegal migration, including smuggling and trafficking of workers, mainly to the Gulf Cooperation Council (GCC) countries [1]—by providing information and making the community aware of the risks.  The initiative also raises awareness about the ILO Convention 189, namely the Domestic Workers Convention, which went into force globally in 2013 and has 22 ratifications to date. Ethiopia has yet to ratify the Convention and raising awareness about protecting the rights of migrant domestic workers is a critical step forward.

Among the nine administrative regional states in Ethiopia, the Oromia region, where Gumi’s village is located, is most prone to migration and a popular source for illegal brokers. Some 161,490 domestic workers from this region have migrated overseas between 2009 and 2014, of which an estimated 155,860—96 per cent—were women [2].

“One of the key interventions of the Project is to also address safe migration for women,” says UN Women Deputy Representative in Ethiopia, Funmi Balogun. “UN Women recognizes the rights of women to safe migration to seek better opportunities and to improve their livelihoods.  To enable this, the project strengthens the capacities of the Federal Ministry of Labour and Social Affairs and its affiliates to provide gender-sensitive information as part of pre-departure training for potential migrant women domestic workers, so that they understand their rights, know how to access support and how to save and protect their earnings. This training and support were designed to assist potential female migrants understand their rights, whether in Ethiopia or in their receiving countries, know where support systems for them are located and strengthen their ability to effectively save and protect their earnings.  The institutions were also supported to understand the rights of migrant workers as stated in ILO Convention 189, and to institutionalize processes and systems for reintegrating returnee women migrant workers into their communities.”

Coordinated by trained facilitators, the Community Conversations take place twice a month and engage men and women of different age groups, returnee migrant workers, families of migrant workers and prospective migrants, religious leaders and community influencers.  The initiative is active in three regions of Ethiopia—Amhara, Oromia and Tigray—and in the Addis Ababa city administration since 2015, and have been successful in changing attitudes and practices of the communities regarding irregular migration. For example, in the Adaba district alone, within four months of implementation, the conversations led to significant reduction of irregular migration. The Government of Ethiopia is now institutionalizing the practice of Community Conversations at the village level throughout the country. 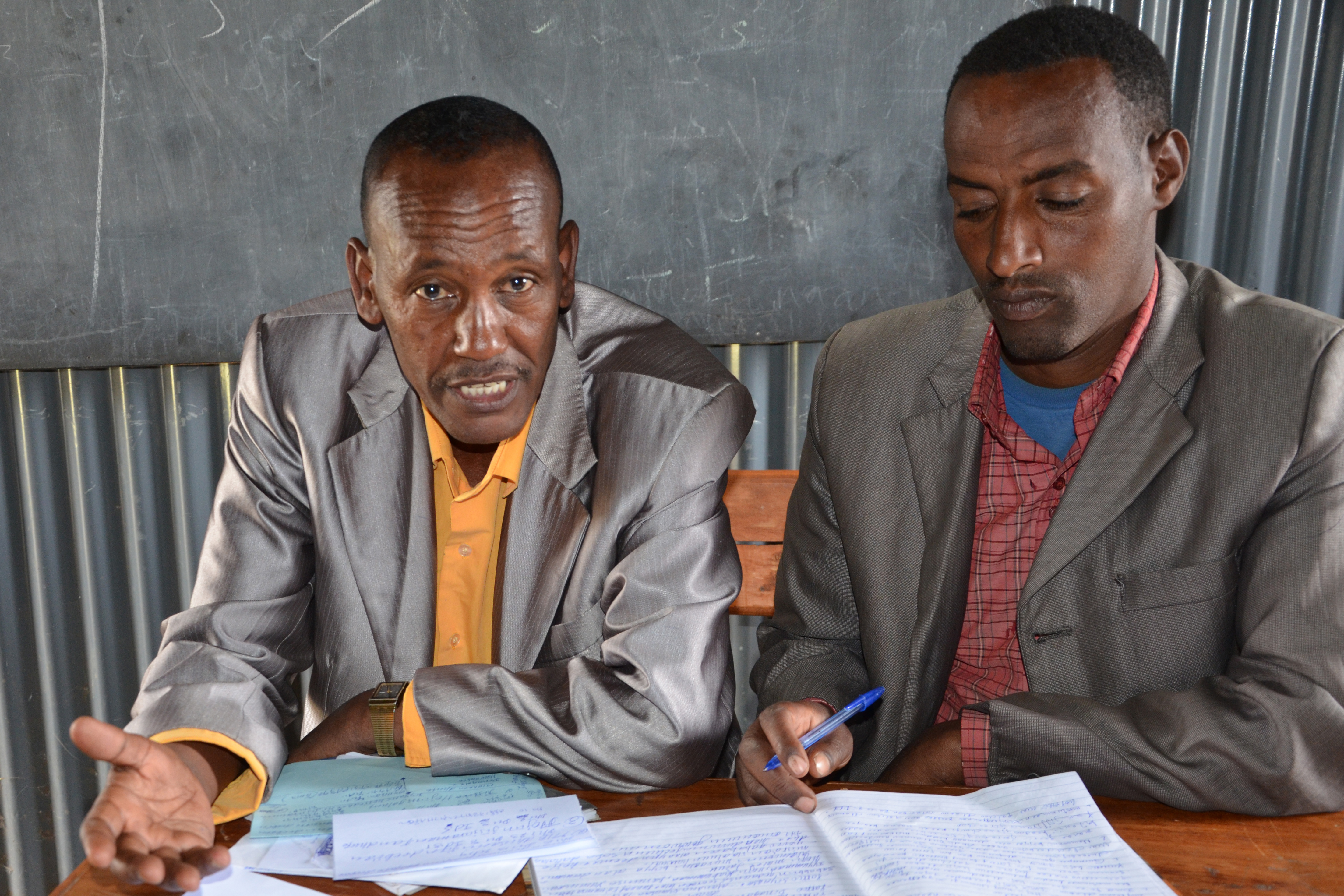 Kebede Tolcha, Adaba district’s Head of the Labour and Social Affairs Office, notes that the initiative is not only helping the villagers in making informed decisions about migration, it is also empowering them to identify the root causes of migration and take their ideas for solutions to policy makers. “In past four months, we have prevented 19 individuals—13 women and 6 men— from taking up irregular migration, and enabled 31 school drop outs who were preparing to migrate illegally, to get back to school in this community,” he added.

As Gumi shares the experiences of her daughters as a cautionary tale for others, she stresses, “If enough resources, including land and employment, is provided to the younger ones, there will be no need for them to migrate.”  As a result of the discussions and with the support from the government, some parents have started investing in their children’s education and income generating activities, rather than financing irregular migration. 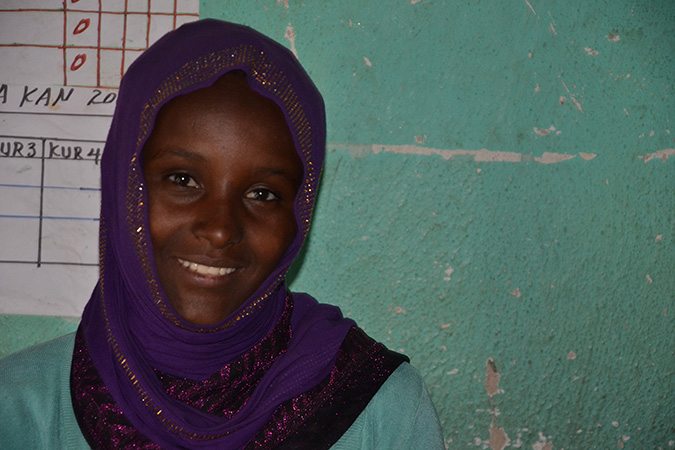 Ashewal Kemal, 17, changed her mind about migrating as a domestic worker using unsafe means as a result of the Community Conversation initiative in the Oromia district. She went back to school, completed 10th grade and now works as an Office Assistant in her village administration. Photo: UN Women/Fikerte Abebe.

The Community Conversations in Adaba District are part of a joint project, ‘Development of a Tripartite Framework for the Support and Protection of Ethiopian and Somali Women Domestic Migrant Workers to the Gulf Cooperation Council (GCC) States, Lebanon and Sudan’ by ILO and UN Women and funded by the European Union.  Over 140,000 women and 85,000 men have participated in the Community Conversation initiative as part of the project.

* Names have been changed to protect the identity of the individuals

Related News
02/10/2013
Towards safer work and migration for women
05/09/2013
Domestic workers' rights treaty becomes reality
15/12/2021
Trafficked and returned: Supporting migrant women survivors in Ethiopia during COVID-19
28/08/2019
From where I stand: “I think of my grandfather when I make Jikos”
19/08/2019
Not waiting for handouts: Five stories of resilience from one of the world’s largest refugee camps
END_OF_DOCUMENT_TOKEN_TO_BE_REPLACED