Remarks by Under-Secretary-General of the United Nations and Executive Director of UN Women Phumzile Mlambo-Ngcuka at the high-level meeting on “Global Leadership – Local Partnerships: Women’s Leadership and Gender Perspectives on Preventing and Countering Violent Extremism” 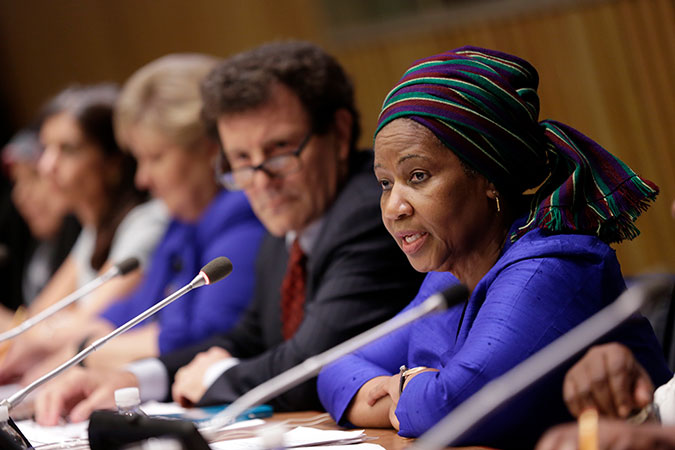 Each day in the city of Kunduz in northern Afghanistan, a radio station runs programmes that educate women about their rights. The station was founded by the women’s human rights defender Zarghona Hassan and addresses subjects like domestic violence, child marriage and reproductive health. The radio programmes reach thousands of listeners. They have made a significant impact on women’s lives, encouraging them to participate in political and public life.

But in September last year, the radio station was ransacked by the Taliban. Leading up to the assault, the station received bomb threats. Of course this created a lot of fear and danger for all of the women who were involved in the station. These are some of the examples of what women go through. I will tell you later what has happened to this radio station.

In Afghanistan a few months ago, I had an opportunity to meet some of the women who are rebuilding their lives, who have survived violence, and who are keen to become leaders and to participate in politics and in programmes that will enrich their lives.

The numbers and the nature of violations against women and girls [around the world] are horrifying. Yazidi women and girls captured and sold into sexual slavery in northern Iraq; forced marriage and abductions by Boko Haram in Nigeria and neighbouring countries; and the restrictions on women’s rights to employment, education and access to basic services in areas controlled by Ansar Dine in Mali, and Al Shabaab in Somalia.

And these are just the stories that make it to the media. There is a litany of terror and subjugation that we never even get to know about.

Women can also be participants in these horrible deeds. They can also be architects of violence and they have been for decades, from the all-female suicide bombing units of Sri Lanka’s LTTE to the “female foreign fighters” supporting ISIS.

Despite the fact that women are sometimes on the frontlines as perpetrators—even through in a significant minority—women are overwhelmingly peacemakers, and these are the stories about women that we need to continue to tell.

Strong frameworks for women’s participation and leadership are being developed but more can be done.

The United Nations Secretary-General’s Plan of Action to Prevent Violent Extremism was launched in January this year. It recognizes the central role of gender equality and women’s rights. It stresses the need for gender mainstreaming across all our actions to prevent and respond, and it calls for a commitment to earmarking funds specifically to furthering women’s rights and empowerment in this area.

The 5th review resolution of the UN’s Global Counter Terrorism Strategy adopted this past July echoes the Plan of Action in highlighting the critical role of women in our prevention and response efforts. It urges Member States and the UN to consult with women and women’s organizations when developing such strategies.

With resolution 2242, which the Prime Minister referred to, we achieved a milestone. This document built on Security Council resolution 1325, and of course we have begun to look at ways to implement this resolution. Adopted one year ago, it goes further than any other resolution in calling for the integration of gender into the countering terrorism and violent extremism agendas.

Its recommendations include urging Member States and the UN system to ensure the participation and leadership of women in developing strategies to counter terrorism and violent extremism, and building their capacity to do so effectively. It calls for adequate financing to make good on these commitments. Separately, the Secretary-General’s 2015 report on Women, Peace and Security requests a minimum of 15 per cent of all funds dedicated to countering violent extremism to be committed to projects that address women’s needs, or that empower women and girls.

UN Women is taking up these recommendations. Our work is based on the premise that any engagement needs to be defined by interventions that promote and protect women’s rights, within the international human rights framework and the women, peace and security agenda.

Our four-track approach is, first, to invest in research to expand and deepen our understanding of the drivers of extremist violence and its impact on women and girls. Our office in Jordan, with civil society partners, has published research into the factors that motivate women to join terrorist and violent extremist movements. The report will inform the development of Jordan’s National Action Plan on Security Council Resolution 1325, as well as our own programming.

Secondly, we support targeted policy development to integrate gender in Member State and UN counter-terrorism frameworks. UN Women will be chairing the Counter-Terrorism Implementation Task Force (CTITF)’s recently established Gender and Counter Terrorism Working Group to support the integration of gender into UN efforts in this area. We have also seconded a gender expert to work in ensuring that gender is mainstreamed in other counter-terrorism work.

Thirdly, we will increase access to justice and essential services for victims of sexual and gender-based violence in the context of violent extremism. Again, we have done that through collaborating with other partners, in particular, civil society, but also with the great support of Member States while working in Syria, Iraq, Nigeria and Libya.

Fourthly, enhancing women’s participation and leadership in counter-terrorism response and prevention efforts is also another area of our work. One of the examples is the work that we are doing in Mali.

Going back to our story in Afghanistan: six months after the Taliban assaulted Zarghona Hassan’s radio–– she was able to come back again. She was able to survive the threats. She was able to motivate her colleagues, and in the face of the threats to her personal safety, she re-opened the office on the 8 March this year, after it had been closed because of the unbearable pressure.

There are many, many stories of women like this, some of them almost too ghastly to tell, but at the same time they are very inspiring. They remind us of the definite link between investing in women and generating a society that will make and find peace.

Related News
29/10/2015
Our focus should not just be on what women can do. It is also on what men can do — Executive Director
14/10/2015
Statement by UN Women on the adoption of Security Council resolution 2242 on women, peace and security
13/10/2015
The most underutilized tool we have for successfully building peace is the meaningful inclusion of women – Executive Director
12/01/2014
Promoting Syrian Women’s Engagement in the Syrian Political Process
03/03/2011
Women, War and Peace
END_OF_DOCUMENT_TOKEN_TO_BE_REPLACED