Take five: Uncovering the untold stories of sexual and gender-based violence in conflict

Aurélie Roche-Mair is the Director of the International Bar Association (IBA) Hague Office, where she manages the International Criminal Justice Programme. As a member of the Justice Rapid Response-UN Women Sexual and Gender-Based Violence Justice Experts Roster, Ms. Roche-Mair served as the Gender Adviser to the judges during the trial of the former President of Chad, Hissène Habré, in 2016. Habré was convicted of crimes against humanity and war crimes, including rape and sexual slavery. The ground-breaking case marked the first African Union-backed trial of a former Head of State. 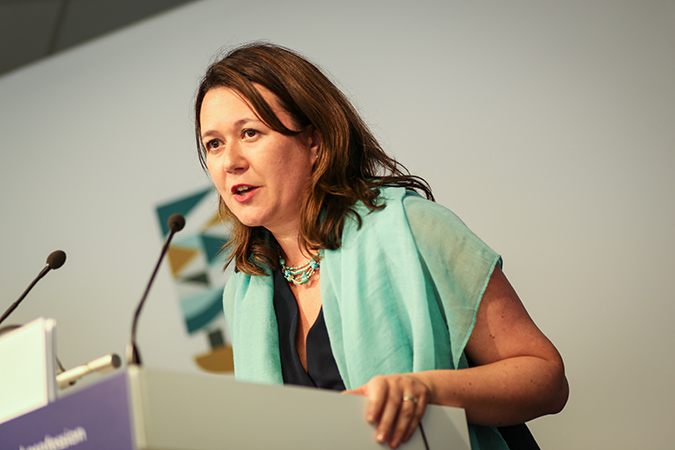 Why is justice for sexual and gender-based crimes during conflict important, and what does justice for these crimes mean for survivors?

Justice sends a message to perpetrators and survivors.

Sexual and gender-based crimes, which encompass a broad range of harmful acts such as rape, sexual slavery, genital mutilation and forced marriage, are recurrent during conflicts. Any conflict-related accountability process needs to address sexual and gender-based violence as an integral part of its investigations, as well as properly and accurately use the existing laws and legal framework to qualify that spectrum of crimes. This is particularly important because the impact of conflict-related sexual and gender-based violence is devastating for survivors and their communities, and sometimes underestimated. These crimes may have lasting effects on the mental and physical health of survivors. These implications, in addition to the stigma associated with survivors of sexual violence, often lead to economic hardships and loss of sense of community. Because many stories of sexual violence remain untold, it is hard to understand how far-reaching the impact can be.

The experience from the ad-hoc tribunals has shown that recognition in the form of a judgment, acknowledging the experiences of survivors and the responsibility of perpetrators, is valuable and can help with healing on a number of levels. With the first few reparation orders at the International Criminal Court, but also in the Habré case, we are starting to see how reparations for such crimes can and should benefit survivors.

What are the biggest obstacles to justice for survivors of sexual and gender-based violence in international courts?

International courts have become better at taking account of sexual and gender-based crimes. For example, the legal framework of the International Criminal Court (ICC), addresses a great number of sexual and gender-based crimes, and includes specific provisions to protect the testimony of survivors in cases of sexual violence. For instance, the ICC rules of procedure and evidence do not require corroboration for crimes of sexual violence. They acknowledge that a woman is unable to give consent in a coercive environment.

But, accountability for sexual and gender-based crimes is still too rare, and two big challenges remain: limited time and resources.

Investigators are working to unravel all layers of the conflict. Since the accounts of sexual and gender-based violence often remain untold and hidden in the dark corner of conflicts, it is easier to miss them entirely, or miss prioritizing them during investigations of conflict situations.

In many contexts, there is a lack of focus or expertise on sexual and gender-based violence, both during the course of investigations and at the litigation phase, leading to missed opportunities in investigations and limited or inaccurate charges in indictments.

How does the JRR-UN Women Justice Experts Roster help in overcoming these obstacles to justice?

About the JRR-UN Women Experts Roster

Since 2009, UN Women and Justice Rapid Response have rapidly deployed 67 specially trained experts to investigations around the world to ensure sexual and gender-based crimes are accurately and safely documented.

The roster includes 217 experts, representing 73 nationalities, who speak 42 languages. fifty-two per cent of the experts are from the Global South.

While we hope that the institutions aimed at addressing accountability in conflict or post-conflict will have expertise ‘in house’ to allow the fullest integration of gender issues in their daily work, many institutions don’t. The JRR-UN Women Roster is a reliable and valuable resource to overcome that gap.

By providing training to hundreds of investigators, analysts, prosecutors, judges, lawyers and other actors, JRR-UN Women Experts Roster helps in developing the special expertise needed for professionals at all levels of the justice process, and in various contexts.

From my deployment, the need for gender expertise in every aspect of conflict and post-conflict investigation and courtroom proceedings became obvious. As an analyst for the trial judges for the Hissène Habré case, I supported them in considering and analyzing the evidence that had been collected over the years, mostly without an expertise in sexual and gender based violence. Survivor’s stories were really only heard in their entirety during the trial. Some women hadn’t felt comfortable providing statements beforehand, not knowing what the outcome would be.

I strongly believe that if a sexual and gender-based violence expert had been involved in collecting evidence and taking statements from these women, their stories would have likely emerged much sooner.

You recently worked with the judges in the Extraordinary African Chambers in Senegal, which convicted the former President of Chad, Hissène Habré, of crimes against humanity and war crimes, including rape and sexual slavery in May 2016. What was your role? Why was this conviction groundbreaking?

As the gender adviser to the Judges in the trial, I provided technical advice through legal and factual analysis of the case, testimonies and the crimes charged.

This case was groundbreaking on many levels. The process of bringing Hissène Habré before a court was a long and challenging one, and many did not think it would happen. More pioneering was the resolution of such a high-level case against a former Head of State, before a specialized chamber backed by the African Union in another African state. The gravity of the case, coupled with the relatively fast process and the impressive participation of more than 4,000 victims, were all groundbreaking features of the trial.

Looking more at sexual and gender-based crimes, the findings of the Chamber shed light on a range of systemic sexual violence and crimes that women and girls, but also to some extent men and boys, endured in the prisons and camps during the Habré regime. It is really in the course of the trial that the extent and nature of those crimes were unveiled, as well as the role that Hissène Habré played in those crimes.

The judgement shed light on the stigmatization of victims and witnesses of sexual and gender-based crimes in that specific context, finally giving them a voice.

What can we learn from Habré’s conviction that can be applied to current situations where there is no justice in sight for victims and survivors?

There are many lessons from the Habré case, and I hope that this case will be analysed in detail in the future. But for situations with no immediate justice in sight, I would say this: Never give up.

The work of civil society organizations is crucial in channeling and keeping up with the efforts needed to achieve justice. Civil society must continue pushing for transparency and raising awareness of sexual and gender-based crimes.

Never forget that reporting, documenting and preserving evidence of violations contemporaneously may in fact play an essential role in court years later. In the Habré case, the many statements collected by organizations supporting survivors, were very helpful in pushing the process forward.

Finally, whether it is for access to donors and resources, or for training and/or expertise in areas such as victim protection or advocacy skills, the sustainability of models such as the Chambres Africaines Extraordinaires currently depends, in my opinion, on the support of international stakeholders.