In the words of Baby Rivona: “Once I fought for my rights, the other women followed” 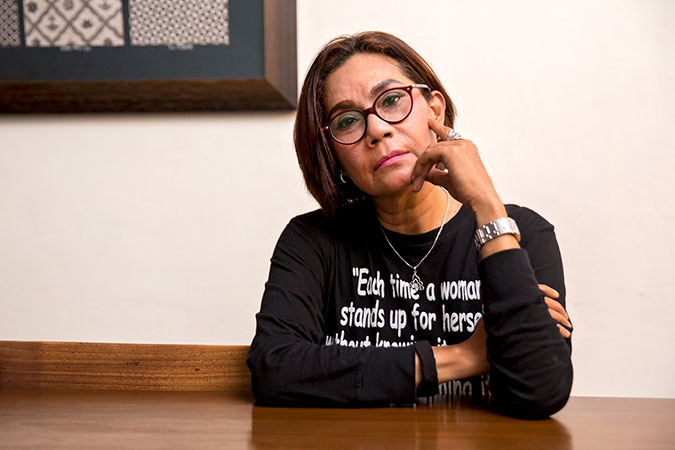 Baby Rivona is a legend in Indonesia, loved widely, as well as feared by some. A passionate advocate of women living with HIV and AIDS, she is as often seen on the world stage, as she is the many districts and villages of her home country. Her mission is to guarantee access to treatment, services, and a life free of stigma and discrimination for women living with HIV and AIDS. She is a leading voice on ending forced sterilization of women and girls affected by HIV, and the current National Coordinator of UN Women’s partner IPPI, a Jakarta-based national network established in 2006, by and for women who are living with HIV. Rivona and IPPI work closely with UN Women in Indonesia to boost efforts focused on building the capacity of women living with HIV, boosting their voices and ensuring that they can influence the policies that impact their lives and communities.

My name Baby Rivona, I am a woman living with HIV for nearly 15 years. I am never getting AIDS, because I am on top of my ART [Anti-Retroviral Therapy], I never stop.

Because of broken family, my father and mother divorced, and then one day someone introduced me to heroine. And I introduced it to my sister! I moved from one city to another city, one province to another province, but I always had the radar to find drugs. I didn’t know how to get out of this situation, to quit drugs. Then one day I decided, I want to go overseas. I went to a company and said, ‘I want to be a migrant worker’.

They sent us both sisters to Malaysia, but after a few months, they sent my sister back because they found out that she was HIV positive. My father put her in rehab again. I didn’t even know what HIV was at that time. After one year, when I renewed my contract, I got medical tests and I was HIV positive. I was 36 years old.

Then my boss called the doctor, my doctor gave me all the information regarding HIV and my boss said, don’t worry I will help you. But the government had already found out because of the medical tests, so I had to go back home. I asked around for a doctor [in hometown] whom I could consult about my sickness. I wasn’t afraid at all. He gave me a lot of books, I read a lot at the time. I learned a lot, attended meetings, and finally, I opened myself to the public. After that I became more and more brave.

Why did I open up? It was because I saw something from within the situation. I thought why are people so afraid of [this] sickness, and why am I not? Then I realized I had an education and strong background before I used drugs, I was working as a secretary in public relations.

I joined the women’s support group and I found I’m not good as a counselor, but I am good at talking to people, and in changing people’s mind. Once I fought for my rights, the other women followed.

In my journey of 15 years [of living with HIV], I met someone, got married, was planning to divorce, when suddenly I got pregnant. I was 42 years at that time, I went to the doctor…I thought I had an infection or menopause, and they said it was a baby! I had delivered the baby through caesarian. Today, my boy is HIV negative and now in the second grade.

The first problem here is the culture. In Indonesia, in Asia, they make the women believe feel they don’t have a chance. Second problem is the economic issue, because not all the women have a good education, and cannot get good work, or money to survive.

Because of what I did, a lot of women came out to the public. It’s not easy, but we can’t get stuck on this culture. Mostly, women don’t know how to tell the family, they’re confused, because suddenly we become HIV positive. We have to survive, educate our family, tell our partner or our children… You have to be brave enough to face all this, you cannot go to anyone, not even health services.

When I feel tired, l visit one of our programmes. Then I realize how lucky I am and this helps me to move forward. When the government calls me, I negotiate. For example, for so many years in government programmes, IPPI didn’t have a role in the country proposals. But when I came in last year, I said no way! Now we have a role there, we even have equal partnership with the Ministry of Health.

We have to involve women living with HIV in decision making. How can you stop HIV transmission, if you’re not sitting there to make laws, to design the programmes, to put the money in the budget…if you’re still on the outside?

One day, the key populations affected by HIV—the women living with HIV, the drug users, the sex workers and LGBT—will sit in the Parliament.”