Expert’s take: “Neither men, nor women should be objectified by advertising” 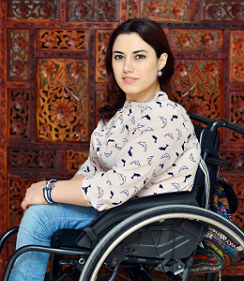 Elena Ratoi is the Manager for the UN Women component of the “Women in Politics” UN Programme. She joined UN Women team in Moldova in 2014 to work on advancing women`s political participation in politics and decision-making processes. Prior to UN Women, she was working as a project assistant for Association “MOTIVATIE” and was engaged in actively defending the rights of people with disabilities. She holds a Master`s degree in Civil Law from Moldova State University..

I remember the morning when I received an aggressive message on social media. It was a comment to an article that I shared about several Moldovan companies being sanctioned for the first time for using sexist images and text in their advertising. I was part of the group that complained against those companies. “Such kind of actions are initiated by ugly, old women that cannot attract men`s attention,” was one of the comments. “Who disappointed you so badly that you are so against men?” was another. Maybe a few years ago, I would have had a similar view.

I got acquainted with the topic of sexism, particularly sexism in advertising, when I started working for UN Women. One of the areas of intervention of the “Women in Politics” Programme, implemented jointly by UN Women and UNDP and two non-governmental organizations, was to provide support to the Ministry of Labour, Social Protection and Family in defining and promoting the adoption of legal provisions on sexist advertising. Back in 2014, there weren’t any regulations related to sexist advertising and the notion of sexism was new for the country.

In 2015 and 2016, we organized many initiatives to combat sexist advertising. Our focus was split in two main directions. We worked with various target groups, including representatives of advertising agencies, people who oversee the productions of commercial ads, public officials working in the field of advertising, and gender experts to raise their understanding of sexism in advertising. We also conducted an analysis of policies and regulations, including international practices.

In April 2016, Moldova achieved a significant breakthrough by adopting Law no. 71 on amending and finalizing several legislative acts, which modified 15 laws. The Law introduced, for the first time, a fine for companies which use sexist advertising to promote their goods and/or services. The Law also makes it an obligation for such companies to remove their adds. The passing of this law was a joint effort by the civil society, gender equality experts, UN agencies, Ministries and Members of Parliament.

Related News
From where I stand: Laura Bosnea
Dads from Moldova: A photo exhibit that challenges stereotypes, showing men alone with their kids
From where I stand: “I am different, but that doesn’t mean that I should be condemned”
Photo Essay: Stela Savin, challenging gender stereotypes in Moldova
Photo contest in Moldova explores perceptions of gender equality
END_OF_DOCUMENT_TOKEN_TO_BE_REPLACED