The final report to the UN Secretary-General's High-Level Panel (HLP) on Women’s Economic Empowerment has now been published, stressing that building women’s economic empowerment must be done in ways that leaves nobody behind, particularly the most marginalized women at the bottom of the pyramid.

The report, entitled “Leave No One Behind: Taking Action for Transformational Change on Women’s Economic Empowerment”, also acknowledges that gender inequalities remain persistent across the world, but they can be overcome if barriers are removed.

In its new report, the Panel lays out concrete actions for accelerating progress towards women’s full and equal economic participation. Some of these measures include: actions to eliminate violence against women (at home and in the workplace), sharing the burden of unpaid care work, ensuring women’s access to financial services and new technology, increasing women’s access to justice, changing culture and practices in employment, procurement and other practices of both the public and the private sector, and ratifying key international agreements for protecting the rights of women workers, especially women in the informal sector and domestic workers.

The new report also elaborates on how economic policies and legal reforms can facilitate an enabling environment, which is critical for breaking the constraints on women’s economic empowerment. 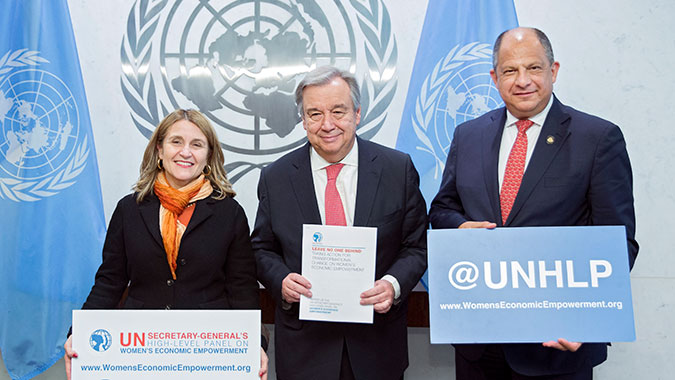 The HLP was established by the UN Secretary-General in January 2016, with the aim to place women’s economic empowerment at the top of the global agenda to accelerate progress of the 2030 Agenda for Sustainable Development. The HLP is supported by the Government of the United Kingdom. Its two reports will be supported by toolkits to guide the implementation of its recommendations, which are expected to be launched in May 2017.

‘LEAVE NO ONE BEHIND Taking Action for Transformational Change on #WomensEconomicEmpowerment’ @UNHLP #HLP 2nd reporthttps://t.co/eIOOxTXrJr

Related News
25/07/2022
Press briefing: The situation of women and girls in Afghanistan
21/07/2022
UN Women and Ant Foundation launch ‘Together Digital’ to empower women entrepreneurs in the digital economy
13/07/2022
Speech: Our ability to fulfil the SDG’s promises depends on our decision to put women and girls at the centre
27/06/2022
In the aftermath of crisis, rural Bangladeshi women pursue economic security
23/06/2022
Op-ed: End the disconnect
END_OF_DOCUMENT_TOKEN_TO_BE_REPLACED