UN Secretary-General António Guterres met with women’s rights activists attending the 61st session of the Commission on the Status of Women to discuss challenges, opportunities and the way forward to ensure gender equality and women’s empowerment, including how the UN can deliver on its own commitments on gender equality. The town-hall style discussion was moderated by Under-Secretary-General and UN Women Executive Director Phumzile Mlambo-Ngcuka. 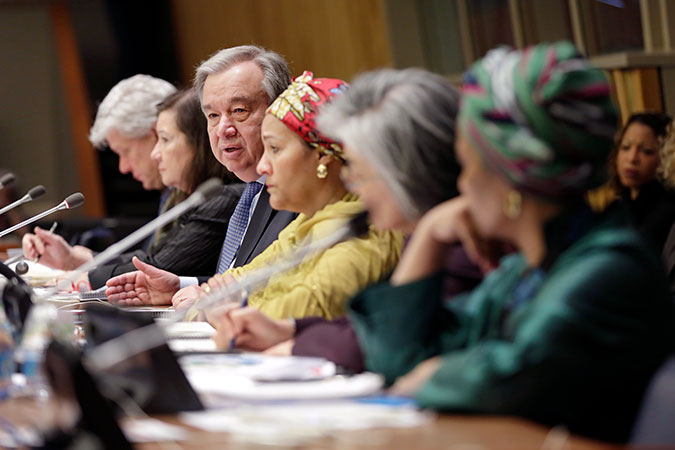 Secretary-General António Guterres holds a town hall meeting with civil society organizations associated with the 61st session of the UN Commission on the Status of Women. UN Women/Ryan Brown

Gender parity at all levels—political, cultural, economic and social—is a “central objective” and must be based on women's empowerment, Secretary-General António Guterres told women's rights activists and civil society representatives today during a town hall-style discussion at United Nations Headquarters in New York.

Parity is important in all areas of political and social life, said Mr. Guterres adding: “This is a battle […] a struggle.” Generally no one likes to lose positions they have long held, but the reality of gender parity is that many more women will be in positions that today are occupied by men. “But that's a good thing,” he said, noting that in his experience, gender parity means better decision-making and better management. 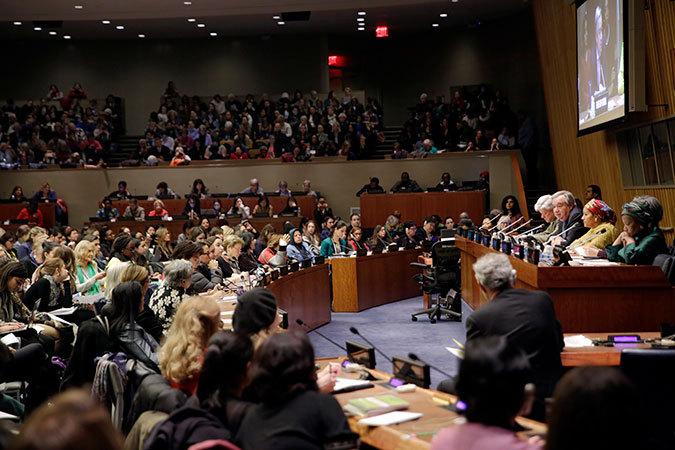 Alongside UN Women Executive Director Phumzile Mlambo-Ngcuka, as well as Deputy Secretary-General Amina Mohammed and his senior staff, Mr. Guterres set the stage for the end of the first week of the 61st Commission on the Status of Women, known as the largest inter-governmental forum on women's rights and gender equality. The theme this year is women's economic empowerment in the changing world of work.

The Secretary-General sought suggestions and opinions of the civil society representatives on how the UN can move forward on its commitments on gender equality. He opened the discussion by sharing life lessons on the issue, telling the gathering that during his time as Prime Minster of Portugal, one of his most difficult battles had been putting family violence on the national agenda.

Related News
09/03/2015
“In 2030 we want to be able to talk about a world that has achieved gender equality” – UN Women Executive Director
26/03/2022
Speech: Agreement on action for a just, safe and sustainable planet
14/03/2022
Speech: Crises multiply threats, women are the solution multipliers
16/03/2021
Remarks by Under-Secretary-General of the United Nations and Executive Director of UN Women, Phumzile Mlambo-Ngcuka at the Town Hall with Civil Society and the United Nations Secretary-General
14/07/2020
Charting the future: more equal, inclusive and sustainable
END_OF_DOCUMENT_TOKEN_TO_BE_REPLACED