(New York, 13 March)— Today, at a packed event in the UN General Assembly in New York, champions of equal pay took centre stage, putting forth a clarion call to end the global gender pay gap that stands at 23 per cent. The event launched the high-profile Equal Pay Platform of Champions, a diverse group of advocates to amplify and galvanize mobilization—as part of a broader ILO-UN Women Global Equal Pay Coalition—calling for equal pay for work of equal value. The event at the UN was hosted by UN Women in partnership with ILO, and co-sponsored by the Missions of Iceland, South Africa and Switzerland, coinciding with the opening day of the 61st Commission on the Status of Women, the largest inter-governmental forum on women’s rights and gender equality, which is focusing this year on the theme of “Women’s Economic Empowerment in the Changing World of Work”.

The Platform of Champions builds momentum to address the issue of pay inequality, which affects women and girls in every country in the world. It brings together Oscar Award-winning American actress Patricia Arquette, two-time Olympic gold medalist and soccer superstar Abby Wambach, along with leaders from trade unions, civil society, government and private sector, film makers and gender equality advocates.

"I'm angry because I have to worry abt paying my bills,even though I won more World Cups than @Cristiano" - @AbbyWambach #CSW61 #equalpayNOW pic.twitter.com/HyMYQHozGx

"Unequal pay is like telling women: you are only 77% of a person"-Kang Kyung-wha,Senior Policy Advisor to @UN SG #CSW61 #equalpayNOW

On global average, women only make 77 cents for every dollar men earn. As a result, there’s a lifetime of income inequality between men and women and more women are retiring into poverty. The global gender pay gap is 23 per cent, and in some countries this gap is even bigger: over their lifetimes, women in Sweden and France can expect to earn 31 per cent less than men; this figure is 49 per cent for women in Germany and 75 per cent for women in Turkey. One of the main reasons for the gender pay gap is that women tend to be concentrated in different jobs than men, such as teaching, health care, or child-care, and these sectors are the ones that tend to be underpaid.

“Women sometimes become invisible if they’re not seen beyond the value of the men they are with." - @PattyArquette #CSW61 #equalpayNOW pic.twitter.com/WadGk7A1jS

"In all fields, at all levels of society, and across all countries, wage inequalities between men and women is a blatant reality, which impacts the lives of many. How much longer are we going to allow it? By joining this Platform, I am determined to shed light on this entrenched form of discrimination and help efforts to put an end to the gender pay gap,” said Patricia Arquette, Oscar-winning actress and member of the Equal Pay Platform of Champions.

“The gender pay gap reflects the unjustifiably diminished position of many women in society and helps to keep them there.  It affects every country across the world and is now coming under full scrutiny,” said UN Women Executive Director, Phumzile Mlambo-Ngcuka. “I am confident the Equal Pay Champions will help to make this flagrant inequality a thing of the past through their advocacy efforts,” she added.

Through their advocacy work, the Equal Pay Champions will raise awareness on this critical issue, and will call on increased political support by proactively reaching out to decision and policy-makers.

"In many ways the quest for women's economic empowerment will be lost or won in the world of work. It will be reflected in whether and how women gain entry to the labour market, and the terms of their engagement in the world of work—whether in fields or factories, service centres, households or boardrooms," said ILO Director-General Guy Ryder.

“The Icelandic Equal Pay Standard will enable us to achieve our goal of equal pay for work of equal value by 2022,” said Thorsteinn Víglundsson, Minister of Social Affairs and Equality, Iceland, one of the co-sponsors of the event. “Iceland knows that gender equality is the basis of our success and economic prosperity. We will implement legislation to require larger firms and institutions to have their equal pay system certified, based on the standard,” he reiterated. 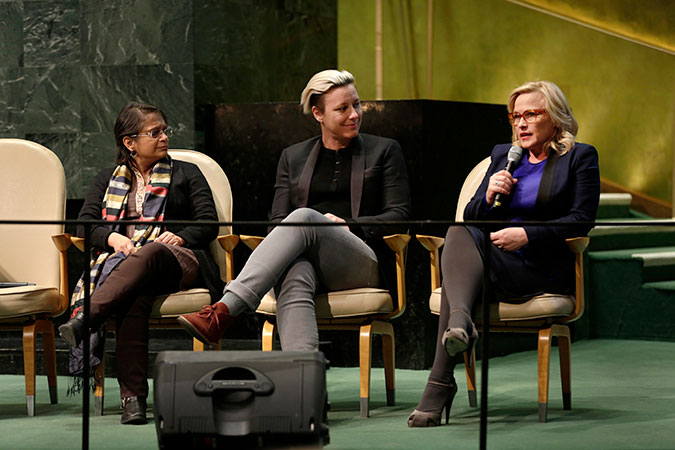 The members of the Platform who were present at the event include:

Additional Champions of the Platform, which is expected to grow in the coming months are:

Attended by high-level government ministers, civil society organizations and private sector and UN officials, the event focused on key next steps to accelerate progress to achieve equal pay for work of equal value by 2030.

Prior to the event, an innovative new UN Women campaign, #StopTheRobbery was kicked off to mobilize global citizens and raise awareness of the gender pay gap. The campaign was created pro bono by Grey Advertising for UN Women and spotlights how women across the world are in effect being “robbed” of 23 per cent of their salary. #StoptheRobbery plays cleverly on 23 per cent of characters of twitter messages being blacked out, and invites people to spread the word by sharing social media messages in support of income equality.

UPDATE: Due to inclement weather, this event has been postponed to Wednesday, 15 March.

Weather permitting, tomorrow, 14 March, the Commission on the Status of Women, the largest inter-governmental forum on women’s rights, will symbolically mark the global gender pay gap, when it will interrupt its work at 4.10 p.m., when there is 23 per cent of the work-day left.

Media are invited to attend and photograph in Conference Room 4 and the General Assembly Hall. All women workers in these two conference rooms will be invited to undertake their after-work activities: read their books or magazines, study, and communicate with friends and family. Symbolically, coffee and tea will be served, as a sign of relaxation and to mark the end of the work day in coffee cups with the following slogan on their sleeves: “EQUAL PAY NOW #CSW61”. A short video produced by UN Women for this occasion will be played.