Forum organized by African Union Commission and UN Women, with the support of Germany, outlines roadmap for women in governance, peace and security 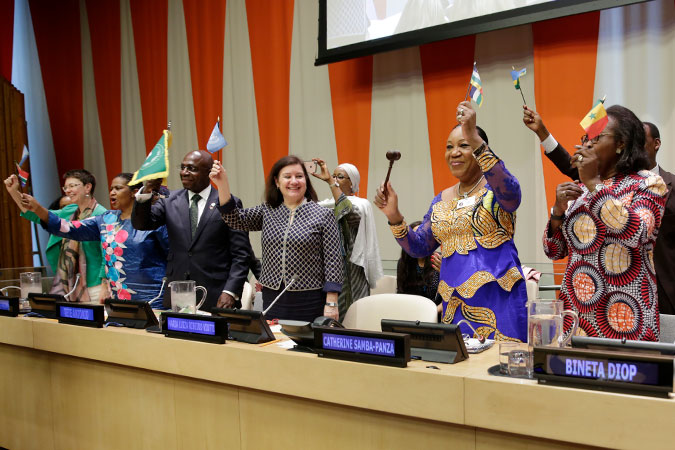 (New York, 2 June)—UN Women, the African Union Commission, and the Permanent Mission of Germany today launched the African Women Leaders Network, a ground-breaking initiative that seeks to enhance the leadership of women in the transformation of Africa with a focus on governance, peace and stability. The Network was launched following the three-day High-Level Women Leaders Forum for Africa’s Transformation, which took place at the United Nations Headquarters in New York from 31 May to 2 June.

To be a woman is to be a leader. Proud to officially launch the #AfricanWomenLeaders Network today! https://t.co/9x1DpzVfY4 pic.twitter.com/vI4QKQzxC6

Through panel discussions and high-level events, the Forum brought together approximately 80 participants from across Africa, including eminent women leaders from the political and public sectors, as well as those in business, civil society and the media. The meeting saw the participation of the leadership of the African Union Commission, including Commissioner for Political Affairs, Minata Samate Cessouma, the Special Envoy for Women, Peace and Security, Bineta Diop, the Director of Women, Gender and Development Directorate (WGDD), Mahawa Kaba Wheeler and senior UN officials, including the Deputy Secretary-General, Amina Mohammed, as well as the Executive Director of UN Women, Phumzile Mlambo-Ngcuka.

“The message being sent by this Network is that Africa needs to act now to implement the decisions that we have taken in our different deliberations,” said Executive Director of UN Women, Phumzile Mlambo-Ngcuka. “These can fundamentally change the lives of women and girls and of Africans in general to prevent conflict and drive inclusive economic growth and development. We must do all of this to achieve clear impact at a local level. This Network is being led by women who are distinguished leaders; we emphasize that this is an open-ended network that can only succeed if it works hand in hand with current existing networks. Above all, we need action, accountability and visible solidarity at both global and local levels,” she added.

The meeting served as a platform and space to garner the leadership experiences of the speakers, make critical linkages between Africa’s political, peace and security context, and women’s effective leadership and participation for the continent’s transformation.

The Forum concluded today with a strong roadmap and launch of the African Women Leaders Network. The Network aims to harness the wealth of African women’s experiences of leadership, build on other existing and emerging networks of women leaders, as well as develop new partnerships to strengthen the capacity of women. It intends to support the advancement of more women leaders on the continent, through peer learning and mentoring, to enhance their contributions to building and sustaining peace, security and political processes for sustainable economic and social transformation, towards the realization of Africa Agenda 2063 and the 2030 Agenda for Sustainable Development.

“My commitment to the Network, as the commissioner of political affairs is non-negotiable, and it is also the stand of the AU leadership to fully support the Network,” said Minata Samate Cessouma, Commissioner for Political Affairs, African Union Commission. “I will mobilize other women commissioners and high-level officials of the Commission to stand behind this initiative.” She added, “We are doing this for ourselves, as we need a functioning network to belong to.”

“Germany is proud to be a part of this important initiative. By bringing together a diverse group of women leaders, the Network will provide a platform for an exchange of experiences and ideas,” said Ambassador Patricia Flor, Director-General for International Order, the United Nations and Arms Control at the Federal Foreign Office in Berlin. “The current meeting in New York is just the starting point for this debate. Sustainable peace and stability cannot be achieved without the equal and full participation of women.”

African women have always played critical leadership roles in their families, communities and civil society. Over time, women on the continent have been increasingly more visible as politicians and senior civil servants, in a context of greater public acceptance of women as political leaders. In Liberia, for example, Ellen Johnson-Sirleaf was the first woman to be elected President of an African nation in 2006. Rwanda has the highest number of women parliamentarians in the world at 61 percent, while seven African countries are listed in the top 20 countries in terms of women’s representation in Parliament.

At the grassroots level, women have been at the forefront of community peacebuilding in post-conflict countries including Liberia, Rwanda and more recently in Burundi. They have also led efforts to counter the Ebola epidemic of 2014-2016, that swept several countries across West Africa. Yet, the continent still presents a mixed picture, as the political participation of women has not translated into consistent and lasting influence of women in decision-making. In several countries, recent elections saw a regression in the number of women elected to parliament, especially in countries where there were no temporary special measures like quotas.

Evidence shows that women play an important role as drivers of change in achieving sustainable peace and development. The Sustaining Peace Agenda, the Sustainable Development Goals and the Africa 2063 Agenda, all identify women’s contributions and leadership as central to finding solutions to poverty, climate change, food insecurity, improving healthcare, reaching vulnerable and marginalized communities and mitigating global economic crises, all of which have a disproportional impact on women. In particular, women’s leadership is a key ingredient of transformative and sustainable peace in fragile, conflict-affected and post-conflict contexts.

The Network aims to reconvene in February 2018 in Addis Ababa, Ethiopia. Until then, a task force will work on the details of the Network and fine-tune a roadmap, including the purpose, structure and activities, as well as draft strategies for sustainability, funding and intergenerational partnerships.

Photos from the launch will be available for downloading from this folder: https://www.dropbox.com/sh/k8sfbz260ts6tj5/AADZXwaZLPRCn3T9ASXwyNG-a?dl=0