From where I stand: “I want the women in this country to be on equal footing with men”

Massah Lewally was one of the first female drivers in the UN system in Sierra Leone. She took up driving so that she could visit the UN projects and learn more. As the crisis continues to unfold in Sierra Leone, with nearly 6,000 people impacted by the mudslides, Lewally is working round the clock and assisting women. 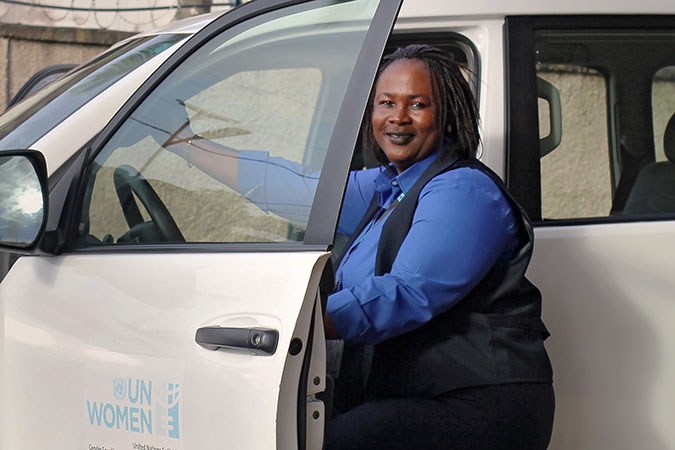 I was driving to work on Monday morning, around 6.30 a.m., listening to the radio. They were talking about the rainfall. Someone called from the Regent area and said the mountain had just fallen. Another caller said there were over 200 houses under the mud… people had been caught unaware, sleeping in their beds.

My father lives in that area. I just visited him on Sunday!

By the time I reached the office, reports were coming in about the heavy flooding from the Regent area down to Kamayama, Kanigo and other areas. We were desperately trying to contact family and friends to make sure they were safe. My uncle called me and said one of my family members—like a sister to me—was missing. She was a final year student at the university. Her whole house collapsed… you can’t even see traces of it if you go there. Up until now, they haven’t found her body.

I am the UN Women driver at the Sierra Leone office. Since the landslide, it’s nonstop work. I drive colleagues to where they need to go; I pack dignity kits for women, which contain underwear, soap, toothpaste, sanitary napkins and other basic health and hygiene items; I talk to the women survivors.

We did the first distribution of dignity kits on Thursday. I registered the women receiving the kits. One of them said she had escaped with just the clothes she was wearing. She had nothing else, so the dignity kit helped. In these areas, many women are vegetable farmers and their farms have been flooded. How will they get by now?

I joined UN Women because I want the women of this country to be on equal footing with men. I may have been the first female driver in the UN system back then, but today we are so many.

Driving has become my way of helping women. When I drive colleagues to visit communities, I talk to the women. If I am driving by and see a man harassing or beating a woman, I stop the car and call him out. Often, seeing the UN Women logo on my vehicle, the men run off.”

Massah Lewally, 38 years old, is the Senior Driver with UN Women Sierra Leone. Like many others in the Freetown area, her family has been impacted by the deadly mudslides. But the devastation around her, and her belief in the need to empower women, motivates her to keep working. When disasters strike, women and girls have needs and experiences unique to men and boys. UN Women is working to ensure that humanitarian assistance benefits and empowers women and girls in Sierra Leone. Lewally’s work contributes towards the Sustainable Development Goal 5 on gender equality and empowerment of all women.