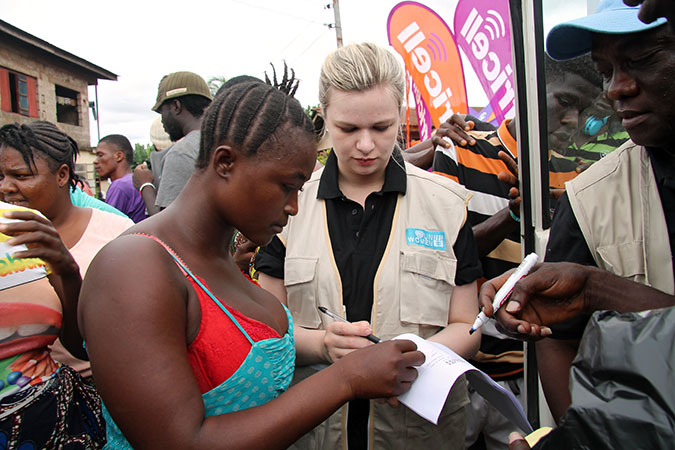 Women receiving humanitarian assistance from UN Women in the aftermath of the mudslides in Sierra Leone. Photo: UN Women

Following heavy rains on 14 August, mudslides have left more than 400 people dead and an estimated 6,000 affected in Freetown, the capital of Sierra Leone. The number of people in need of humanitarian aid is expected to rise as rain and floods continue.

Memunatu Kamara, 38-year-old mother of three, recounts the horrific ordeal:  “It was around three in the morning when I heard a very loud noise and something hit our house. I immediately woke my husband and my two daughters, aged nine and 15. I carried my one year old son Sullay, but on our way out, my husband and two daughters were hit by heavy rocks and they died. All I have left is my son the clothes that I am wearing. I am still wondering whether this is a bad dream or actual reality…”

Women and girls are often disproportionately impacted during times of crises. They have unique health and hygiene needs, and shoulder increased burden of work, caring for children, the sick and the elderly. They are also rendered more vulnerable to violence and exploitation, particularly in environments where gender-based violence rates are already high, such as in Sierra Leone. Many women and girls in Freetown already lived in poverty and precarious circumstances.

UN Women is leveraging its partnerships to ensure women’s leadership in humanitarian response in Sierra Leone and to meet the urgent gender-based needs of the affected population. 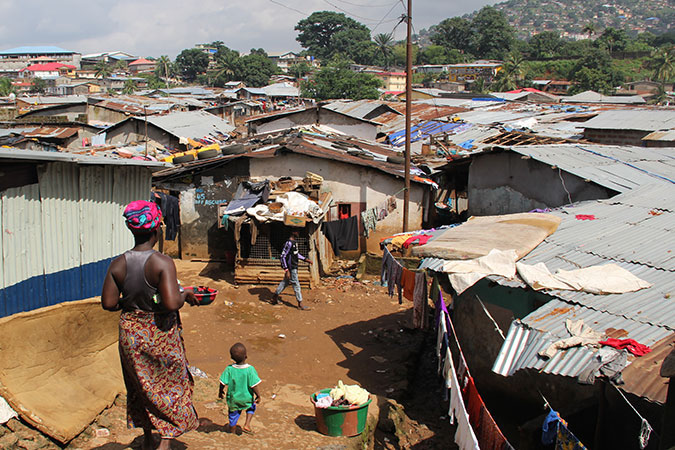 Mudslides in Sierra Leone have effected an estimated 6,000 people. Women must be included in humanitarian response. Photo: UN Women/Cecil Nelson

“Our boots are fully on the ground. We were among the first ones to be there, and we are ensuring that humanitarian assistance immediately reaches women,” said Mary Okumu, UN Women Representative in Sierra Leone.

UN Women is also providing women with dignity kits, which contain basic health and hygiene products for displaced women and girls, such as soap, underwear and sanitary napkins.

Massah Lewally, a driver in UN Women’s Sierra Leone office, is working round the clock these days, driving colleagues, distributing dignity kits and talking to survivors: “We did the first distribution of dignity kits on Thursday. I registered the women receiving the kits. One of them said she had escaped with just the clothes she was wearing. She had nothing else, so the dignity kit helped. In these areas, many women are vegetable farmers and their farms have been flooded. How will they get by now?” Read her full story here>>

Making humanitarian action work for women also requires ensuring that women’s voices and experiences are incorporated in planning recovery assistance, as women are often the first responders and caregivers in their households and communities.

Kadiatu Thoronka, 35, is a single parent with four children who received dignity kits distributed by UN Women. Not long ago, she had lost her husband and two children during the Ebola outbreak. ‘‘It was 3 a.m. when my 14-year-old daughter Kalaytu Thoronka woke me up, showing me the water that was coming into our house. Before we could do anything, water was spouting from everywhere and then the left side of my house collapsed… I thank God that my four children and I survived the flood, but I have lost my business capital worth USD 400, and all my belongings. I have nowhere to start but with this dignity kit,” she shared.

In addition to distributing dignity kits, UN Women is preparing to provide economic opportunities for women in temporary shelters, allowing them to earn an income for themselves and their families. Three empowerment hubs will be set up in affected communities, where one-stop centres will provide safe spaces for 1,000 women to convene, seek psychosocial support and access information and critical services, such as cash-for-work programmes.

UN Women is working with the Government and other humanitarian partners, including the World Food Programme (WFP), UN Population Fund (UNFPA) and UNICEF, as well as local women’s organizations, to ensure that the gendered needs of women and girls are factored into the overall humanitarian response.

UN Women’s humanitarian response in Sierra Leone is part of the Women’s Leadership, Empowerment, Access and Protection in Crisis Response (LEAP) programme, which builds on UN Women’s experience from 35 countries across the world. In 2016 alone, UN Women served 125,000 displaced women and girls in complex humanitarian settings.

Note: The story was updated on 23 August to add the voices of survivors.

Related News
23/08/2017
From where I stand: “I want the women in this country to be on equal footing with men”
21/12/2015
UN Women receives Presidential Award for action to confront the Ebola crisis in Sierra Leone
19/05/2015
The new yellow in Sierra Leone: Getting Ebola to Zero
19/08/2019
Not waiting for handouts: Five stories of resilience from one of the world’s largest refugee camps
18/06/2018
Resilient and empowered, South Sudanese refugee women find new beginnings in Uganda
END_OF_DOCUMENT_TOKEN_TO_BE_REPLACED