Today, Bustamante is 43 years old, and sexual harassment against women and girls on the streets of Guatemala City and in other public spaces, is still commonplace. The risk is particularly high in public transportation: “Men approach you and rub up on you when the bus is crowded,” she says. 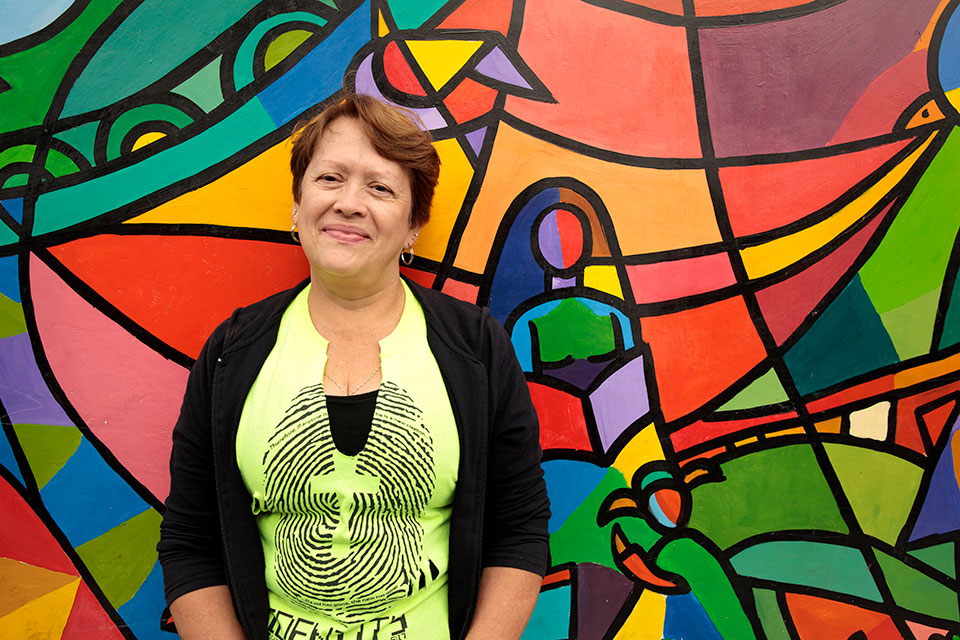 Alba Morena Fernandez, 56, resident of Zone 5, Guatemala City, poses in front of the mural residents painted as part of a larger initiative to engage women and their community in reclaiming streets, parks and public spaces, as part of the Safe City programme. Photo: UN Women/Ryan Brown

Every woman surveyed in seven zones of Guatemala City as part of a baseline study conducted in 2017 by the Guatemala Safe City and Safe Public Spaces programme, which began with support by the Spanish Agency for International Cooperation, acknowledged having suffered sexual harassment at some time during her life on public roads. At least 44 per cent said it happens daily.  The Guatemala Safe City programme, is one of 35 cities which participate in the UN Safe Cities and Safe Public Spaces Global Initiative.

Berta was one of those respondents. They identified areas throughout the seven zones of the city where women and girls felt most unsafe. These included public transportation, closed alleys, walkways, parks, open spaces and bus stops. Fifty percent said they felt insecure when walking alone during daytime; while 42 per cent said they felt unsafe in educational centres and health services centres. Some 34 per cent of women surveyed admitted feeling unsafe when they were near security agents.

The “pioneering and unique” study according to Adriana Quiñones, UN Women Representative for Guatemala, “offers a multidimensional diagnosis that contributes to the understanding of the problem and the impact it has on the lives of women and girls every day. And, it places sexual harassment in public spaces on the public agenda at the national and municipal levels.”

The study recommends investing in creating safe public spaces, improving the focus and quality of services, especially for survivors of sexual violence, and empowering women to participate in local commissions and urban planning to ensure that cities take account of the needs of all women and girls.

During the Safe City programme design phase, following the study, more than 250 women and girls from the city, as well as civil society organizations participated in workshops that identified concrete ways to improve women and girls’ experiences and feelings of safety in public spaces.  For instance, in areas where women recommended to ensure well lit streets in helping to increase the visibility of women and other users of these spaces and to reduce the opportunities for perpetration of violence, the municipality is exploring the installation of street lighting. The municipality will also explore building more public bathrooms for women in parks and markets and directly consult with women users in the design of those spaces.

The Guatemala Safe City programme has led to many unique policy measures as well which will improve public safety, such as strengthening five municipal centres offering essential services for women and girls. The first “Policy and Municipal Plan for the Integral Life-long Development of Women, 2018-2027” was designed and expected to be adopted this year, which means, going forward there will be channels and systems in place to include women in designing urban plans and projects.

Other efforts include: a diploma on Gender Equality for 50 municipal officials and the development of a web tool to monitor, map and disseminate cases of violence in public places, in partnership with Guatemala’s Observatory against Street Harassment.

UN Women is also working with national institutions, such as the Vice-Ministry for the Prevention of Crime and Violence, to make sure women’s needs are addressed in any security plans and actions. For instance, the Vice-Ministry organizes neighbourhood walks and mapping by women to identify security risks. 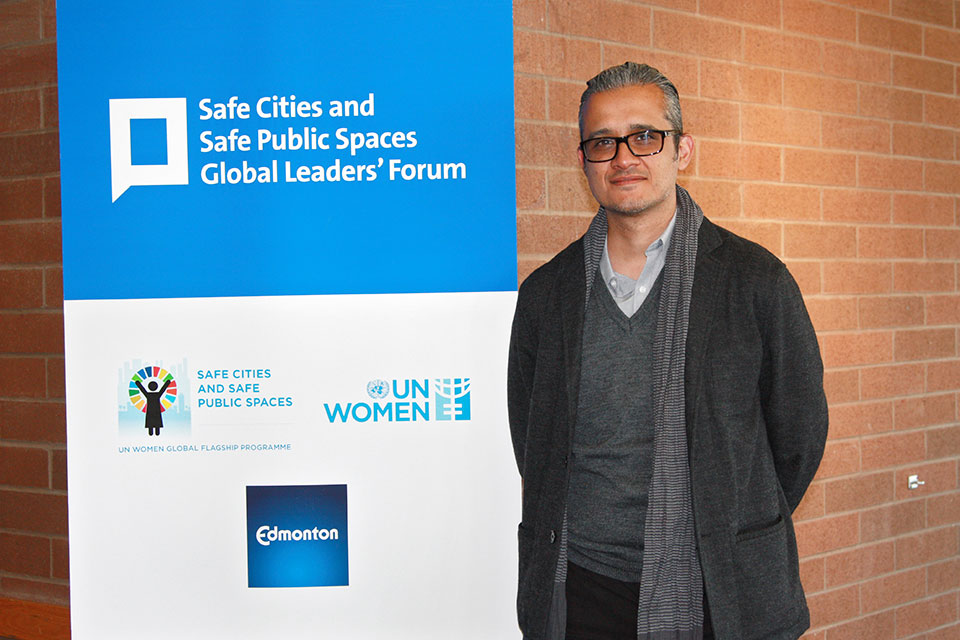 “We are working with UN Women to improve protection and prevention of violence against women,” says Axel Manuel Romero García, Vice-Minister of Violence Prevention and Crime. “The National Coordinator for the Prevention of Domestic Violence and Against Women, a mechanism for coordinating actions by government and non-government organizations, is the first project we focused on. In 2018, a new National Plan for the Prevention and Eradication of Violence Against Women is being designed, also with technical support from UN Women. This process is making the collaboration between various institutions stronger.”

Efforts are now underway, backed by UN Women, to reform the Criminal Code of Guatemala and define sexual harassment as a crime under the law.

Building upon these gains, Guatemala is now part of the European Union and the United Nations led “Spotlight Initiative” to eliminate violence against women and girls and harmful practices in more than 13 countries worldwide. In 2019, through the Spotlight initiative, UN Women will continue supporting actions as part the Guatemala City Safe City Programme and launch initiatives to safeguard women against sexual harassment in two new municipalities: Cobán and Chinaultla.

For Vice-Minister Romero, there is one more element, just as critical as the progressive policies and laws being designed, and that is men’s engagement in making Guatemala safe for women and girls.

“I believe that there has to be a new approach to how men deal with not only masculinities, but also with [gender] equality,” he adds. “A sustainable transformation cannot happen if men do not participate…and it’s not about changing superficial behaviours, but it’s about [men] seeing, feeling and treating women equally.”