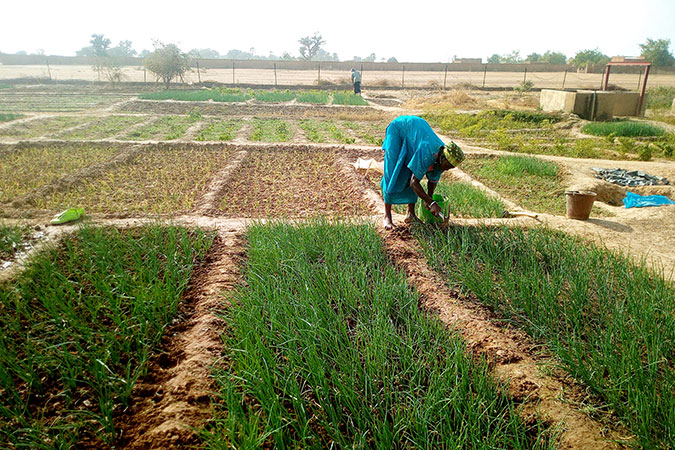 When Fatou Dembele’s plants first started dying, she thought the plot of land was ruined, and her livelihood was at risk.

“We thought the land was sick,” Dembele says. “We didn’t know that there were live parasites that attacked the roots of the plants and could kill them.”

The increased number of parasites, because of rising temperatures and humidity, is just one of the many side effects of climate change here.

In Mali, a country where half of the population engaged in agriculture are female, agriculture is a key sector to lift women out of poverty. But the increasing degradation of land and natural resources caused by climate change is making women more vulnerable.

To combat the negative impact of climate change on women’s livelihoods, a new UN Women programme known as Agriculture Femmes et Développement Durable (AgriFed), implemented by the local non-governmental organization Groupe d’Animation Action au Sahel (GAAS) Mali, is helping local producers adapt to these new challenges.  The programme works with farmers to modernize their techniques, enables their access to information on latest advances in agriculture and increases the value of their products by improving their conservation methods.

"The effects of climate change are not sparing Mali, and are hitting this country hard, an additional challenge in an extremely fragile security context in the Sahel region,” says Maxime Houinato, UN Women Country Representative in Mali.  “And yet, Mali, although a low contributor to the global emission of greenhouse gases, is no less committed to the race to adapt to the effects of climate change.”

To restore Dembele’s production, the programme taught her how to use locally available biopesticides to eliminate the parasites. “Thank goodness, we learned that there are local plants whose extracts can fight this disease,” says Dembele.

Members of the women’s cooperative use climate-resilient organic compost and biopesticides in their farm. Photo: UN Women

AgriFed started its activities in 2017 in the Segou region, over 200 kilometres northeast of Bamako, the capital of Mali. Training on sustainable agriculture techniques reached 247 women and 66 men. The training helped farmers improve water usage, crop scheduling, pesticide and fertilizer use, and cultivation techniques.

In the towns of Boidié and Sécoro, and Cercle de Tominan, women have improved and increased production of shallots thanks to the training. But during harvest, it became clear that the women needed to learn how to conserve their produce better.

“We grow shallots and onions because of their long shelf-life, but we did not know conservation techniques [before],” explained Hayèrè Keita, a shallot producer and seller in Sécoro.  “Following our traditional methods, the rates of loss can be very high.”

UN Women supported further training sessions that showed the farmers how to preserve products like shallots, onions and potatoes. Around 110 women producers have managed to increase their revenues using these modern production and preservation techniques.

“I have been growing vegetables and fruits for 20 years, but I only knew the traditional way of doing it,” says Alphonsine Dembele, another farmer. “AgriFeD taught us to diversify the products we grow, with the introduction of the potatoes, tomatoes and peppers. They not only bring additional income, but also help improve nutrition at home and reduce malnourishment in our children. It has had a positive influence on social cohesion, because women [from different ethnic communities] now meet and have dialogues during the training sessions in the fields.”

The programme, funded by the Government of Luxembourg, will run for five years and is expected to be replicated in other areas of the country.

Related News
16/03/2018
Climate-smart agriculture paving the way for women’s empowerment in Mali and Malawi
12/12/2017
Press release: UN Initiative to boost resilience of women and youth in the Sahel through climate-smart agriculture launched at One Planet Summit
28/02/2022
Weather forecasts shift climate change impact for women farmers in Malawi
28/02/2022
A climate smart approach to drought in Kenya’s arid lands
20/04/2021
From where I stand: “A better understanding of climate change has transformed the way we work”
END_OF_DOCUMENT_TOKEN_TO_BE_REPLACED