From where I stand: “We need men who will stand up for the rights of women and girls”

E. Wilkins Nah is one of 15 public prosecutors at the frontlines of the fight against sexual and gender-based violence in post-conflict Liberia. By combining his legal experience with knowledge on survivor-centred response, he is working to end impunity and ensure justice for survivors. 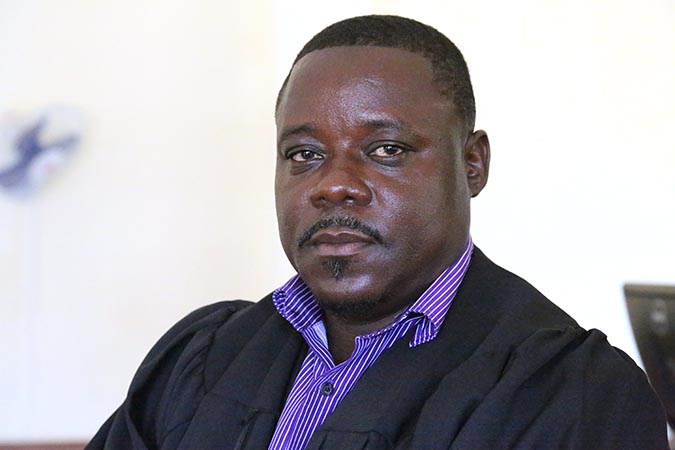 When I took over as County Attorney (Prosecutor) in Bong County, I had no understanding of how to deal with cases of rape or other cases on violence against women because I had never been trained in this area.

I only knew how to deal with the legal aspects of a case, and didn’t consider the special needs of a survivor, like medical and psycho-social support or confidentiality. It was only after I received the training sessions through UN Women that I became aware of the ethical principles of dealing with cases of violence against women. Today, when I receive these cases, my first concern is to ensure a proper referral pathway for the survivor—first, does she have access to a health facility, is she receiving proper service at the police station, does she have a psychosocial counselor, and finally, the legal proceedings in the court.

From my experience of prosecuting sexual and gender-based violence cases, the root cause of this violence is that culturally, women are considered as (inferior) subjects under men’s authority. The level of awareness of the rights of women and girls is very low, especially in rural communities.

I think when someone is not directly involved in dealing with these cases, they tend to underestimate the magnitude of the problem. Violence against women and girls, especially rape is a problem that is destroying the social fabric. When you see that most survivors are children, it is mind-boggling.

There is need for more work to curb this situation. We must all work together because tomorrow it could hit close to home. No one is safe.

We need a mass movement led by men in raising awareness of the effects of these acts of violence. We need men who will stand up for the rights of women and girls.”

Wilkins Nah, 43, is among nearly 173 individuals in central Liberia, including police officers, prosecutors, health and social workers, who have been trained in the provision of rapid and coordinated medical, counselling and prosecutorial services for survivors of sexual and gender-based violence through the Joint Programme on Sexual Gender-based Violence and Harmful Traditional Practices. The programme is being implemented in collaboration with UN Women, UNICEF, UNFPA, UNDP, UNHCR and a number of Liberian ministries, and funded by the Government of Sweden. Through his work, Nah is contributing towards Sustainable Development Goal (SDG) 5 on gender equality and its target on ending violence against women, as well as SDG 16, which promotes peace and justice.