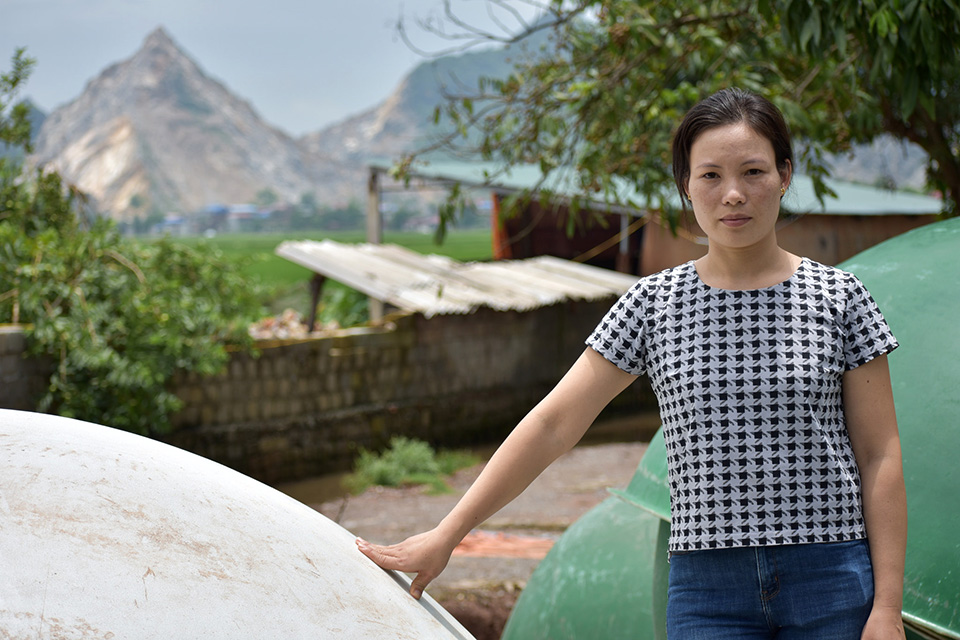 When Trin Gim first started her biogas digester business, many members of her community raised their eyebrows. In the little district of Ung Hoa, located south of Viet Nam’s capital, Hanoi, villagers were not accustomed to seeing a woman take the reins of a business. But eight years later, Trin Gim has achieved not only financial success, but has played a role in a larger fight in Viet Nam against the devastating impacts of climate change.

Ung Hoa is a lush pastoral paradise, where pig farms are a popular feature in most households. Waste from the pigs can be converted into combustible methane gas with a biogas digester. That gas can be used as energy for cooking and household needs. Trin was initially involved in installing these digesters in homes but has since expanded her skillset.

She works to explain the benefits of a digester to potential customers, and then negotiates a price and payment schedule, assesses the feasibility and size of the biogas plant, carts the required material to the house and, together with her team, installs the biogas plant. With eight people in her employ, Trin has now installed about 3,000 biogas plants across seven districts.

Related News
11/11/2016
Take five: On the front line of disasters, women are more at risk and less heard
22/09/2022
Press release: New UN policy paper shows the devastating impacts of the Ukraine war on women and girls
07/11/2017
In the words of Varanisese Maisamoa: “We want to empower our market vendors to be climate resilient”
23/11/2016
Op-ed: Women powering a clean future
17/12/2015
Statement by UN Women Executive Director on the adoption of the Paris Agreement under the United Nations Framework Convention on Climate Change
END_OF_DOCUMENT_TOKEN_TO_BE_REPLACED