In 2005, Myanmar passed an anti-trafficking law, but trafficking is still rampant in the conflict-affected state, especially in the northern region, where it borders China. A UN Women programme is supporting local partner, Htoi Gender and Development Foundation, in providing legal support and vocational training to survivors. According to Htoi, in 8 out of 10 cases, women are trafficked as brides and another 20 per cent are trafficked to birth babies. 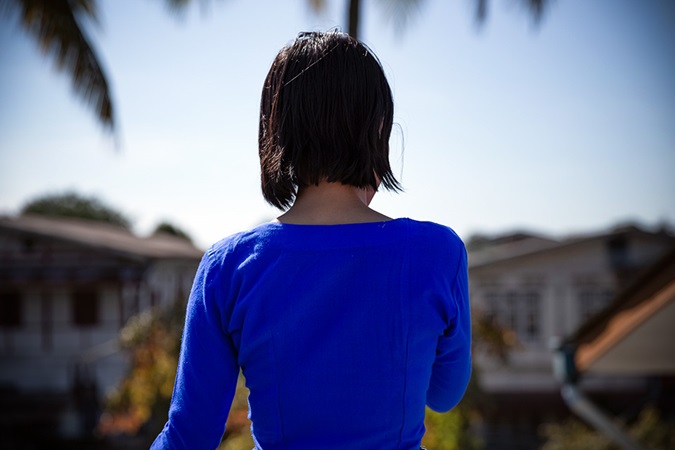 Khawng Nu, now 24, was duped by a woman from her rural village in Myanmar, who sent her to a birth trafficking ring in China. Photo: UN Women/Stuart Mannion

Khawng Nu* was 22 years old when she was trafficked from the state of Kachin, northern Myanmar, to China. There are few job opportunities in the conflict affected and impoverished state, so when a woman from her village offered her work in a factory in China, Khawng Nu happily accepted. Upon arrival in China, she discovered that her womb would be the ‘factory’.

“They give pills to women and inject them with sperm for them to carry babies for Chinese men,” explains Khawng Nu, adding that women would supposedly receive 1 million MMK (USD 632) once the baby was born. “They are not allowed to breastfeed or to give their babies a name.”

Khawng Nu managed to send a message to her family, who shared it with the pastor and informed the village leaders. The broker from her village was arrested but didn’t disclose her location. Khawng Nu recalls seeing some 40 women on the floor of the building she was kept; some as young as 16.

There, she met Mun Pan*, who was barely 18 years old when she was trafficked from the village of Naung Mun, northern Myanmar. 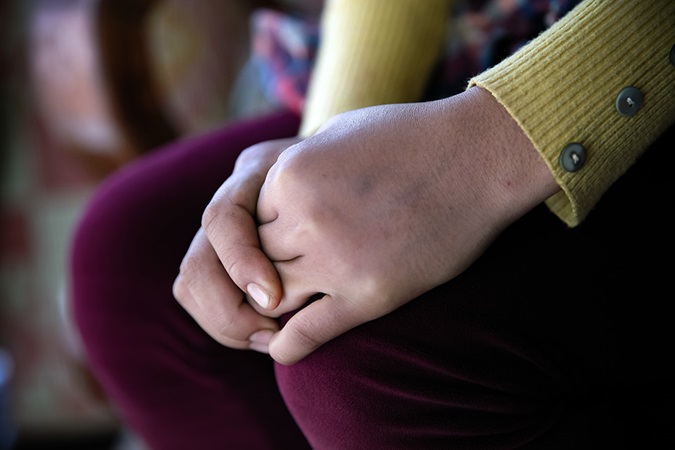 Burmese trafficking survivor Mun Pan was told that she would work as a butcher or in a phone factory in China. Photo: UN Women/Stuart Mannion

“When I arrived, no woman wanted to tell me what the job was,” says Mun Pan. “They told me: ‘it’s a good job, you don’t have to do anything’. They gave me various medicines and injections and didn’t explain why.”

Khawng Nu says they were beaten and bullied if they put up any resistance. The women in Mun Pan’s room told her that if she tried to escape, she would be murdered and her body would not be returned to her family (an important rite in Kachin culture).

Eventually, both girls’ families were able to pay a ransom of sorts for their return. Khawng Nu’s parents had to borrow from neighbours to pay the 10 million MMK (USD 6,320) ‘fine’.

After her return, Khawng Nu gave the authorities a list of names of the other girls she had met in China, as many were from her village. Five of them were rescued, including Mun Pan. 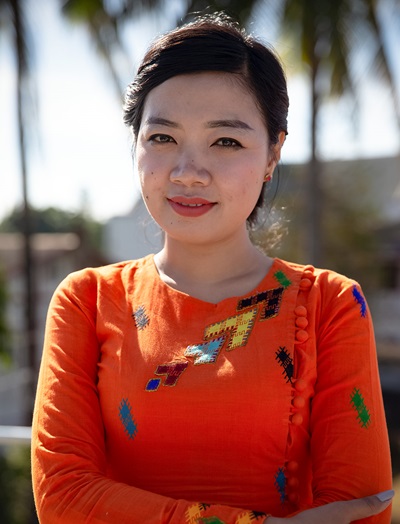 UN Women’s local implementing partner, Htoi Gender and Development Foundation, assisted with the rescue and is providing legal support for their court cases.

“In most cases, the first broker is a relative or a friend,” explains Htoi lawyer Sar Li Htwi. She’s heard of women being resold to other families after giving birth, and of a baby girl being killed after delivery because the family wanted a son. She says in 8 out of 10 cases, women are trafficked as brides and another 20 per cent are trafficked to birth babies.

Myanmar signed a 2004 anti-trafficking agreement and passed a law in 2005, but procedures are unclear, anti-trafficking police have little budget, and the existing law “is still weak and not fully implemented,” says Ms. Li Htwi.

Htoi provides rescued women and girls with legal aid, psychosocial counselling, referrals to services, skills training for their economic recovery and human trafficking awareness training. Eight three-day training workshops have been organized since April 2018, covering 13 townships and engaging 165 participants. To further spread the messages locally, 35 community mobilizers were identified among those taking the training and given additional training, posters and leaflets to distribute locally. 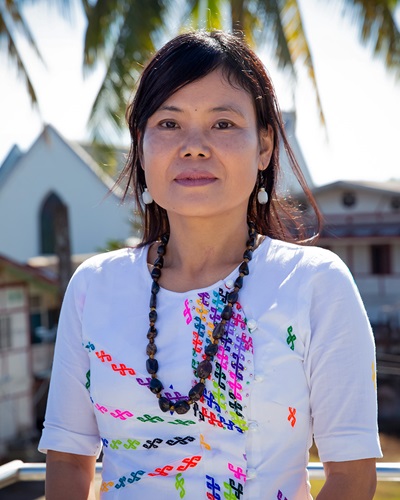 It’s all part of a project on preventing and mitigating the impacts of trafficking through women’s empowerment and livelihood training, supported by UN Women and funded by the Government of Japan.

“As a Kachin woman, I was driven to advocate for the equal rights of women in Kachin,” explains Htoi Director Nang Pu.

Htoi also organizes peer mentoring groups for survivors to connect and support one another.

“At first, when I returned, I felt ashamed and I didn’t want to show my face,” says Khawng Nu. “Now, after meeting with other women trafficking survivors through the peer group organized by Htoi, I no longer feel alone and seeing that there are other women who went through the same experience gave me courage.” 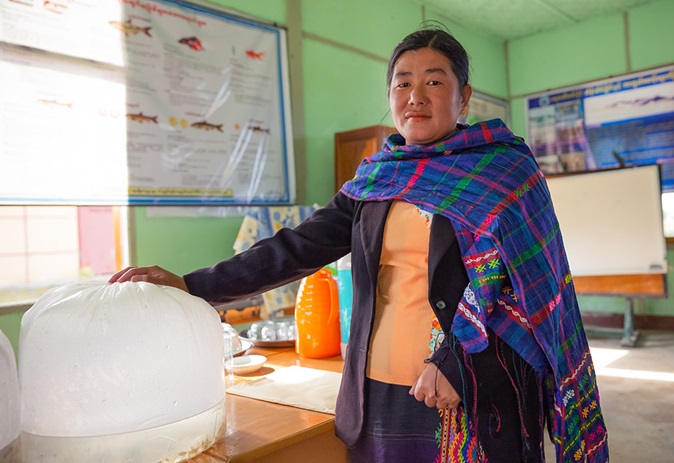 In Hka Shi village, Waingmaw township, a woman enrolled in the catfish farming training says she is thankful she can do it from home, while caring for her baby. Photo: UN Women/Stuart Mannion

The programme helps survivors and potential trafficking victims re-enrol in school or join vocational training programmes, where they learn both traditional skills like weaving, sewing and handicrafts, as well as new skills, such as fish farming and how to cultivate high-value crops, such as mushrooms, silkworm-mulberry and organic cotton.

The lack of income-earning opportunities for survivors often puts them at risk of being re-trafficking or other forms of exploitation. So, the programme also empowers women to set up and run their own shops and businesses as entrepreneurs or market vendors. 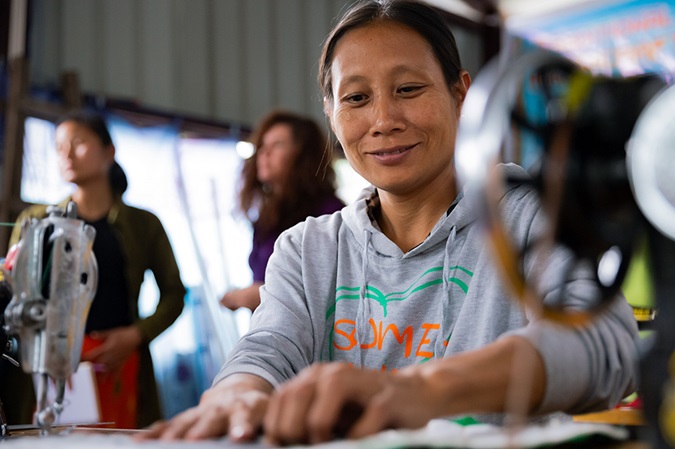 Khawng Tse, a 35-year-old internally displaced person (IDP) from Ayeyar Ward in the city of Myitkyina, Khawng Tse is completing her sewing classes and will receive a sewing machine from Htoi, with the support of UN Women. She hopes to set up her own tailoring business. Photo: UN Women/Stuart Mannion

Khawng Nu now owns a sewing machine and is looking for more start-up capital to set up a tailoring shop. 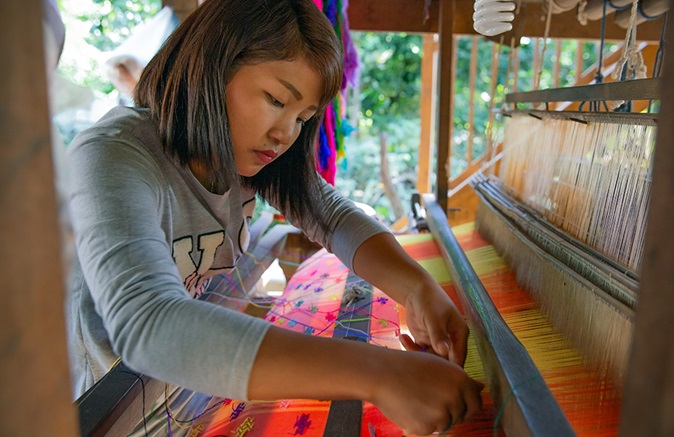 In Zee Lum Ward, Myitkyina, 27-year-old Ja Doi Lahpai—who was exploited in a mobile phone factory in China—has since learned how to weave, start a business and handle marketing and financial management. Photo: UN Women/Stuart Mannion

In less than a year, the programme has already trained 125 trafficking survivors, women in at-risk communities and in Internally Displaced Peoples camps and villages, imparting financial management and marketing skills, linking beneficiaries to training centres and markets, and providing business start-up grants once training is complete.

Related News
08/01/2019
From where I stand: “They forced me to get pregnant”
14/01/2019
A fresh look and a fresh start for survivors of human trafficking in Cambodia
07/12/2022
Speech: Tackling challenges head on
15/11/2021
How women migrants in Thailand are stopping trafficking and gender-based violence in their communities
01/08/2021
Joint statement by UNFPA and UN Women: Impacts of the compounded political and health crisis on women and girls in Myanmar
END_OF_DOCUMENT_TOKEN_TO_BE_REPLACED