From where I stand: “They forced me to get pregnant”

Aung Ja* was 18 when a woman from Myitkina, northern Myanmar, convinced her to take a ‘factory’ job in China. She was rescued in 2017 and is taking part in a UN Women-supported trafficking prevention programme. 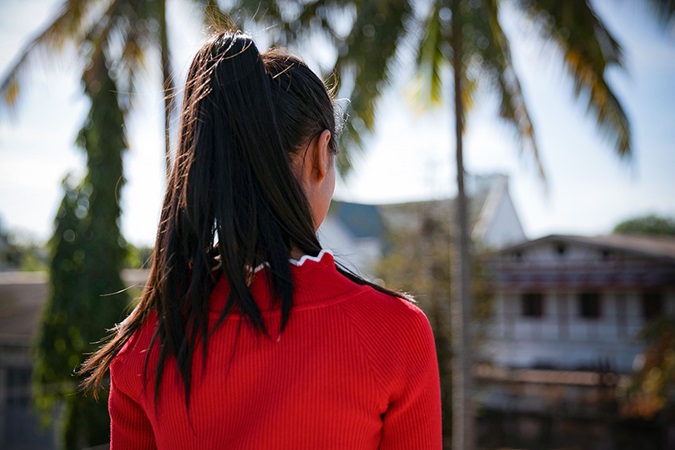 [The broker] convinced my aunty that I could get a job in China. I had stopped school and was not doing anything, so I needed a job. She showed me a picture of a phone factory, and a shoe-making factory. But when I arrived in China in May 2017, they forced me to get pregnant. They gave me pills for 10 days to prepare the womb. Then I went for a medical checkup to see if my womb was ready and they injected the sperm in the hospital, in total, three times.

Women are paid 250,000 MMK [USD 160] for each month for the first five months of pregnancy, then 1 million MMK [USD 632] towards the end of the pregnancy and 1 million MMK again if they give birth. If it’s a girl, they would get paid less than if it’s boy.

I didn’t get out of the room for five months, only to go to the hospital, blindfolded. My only hope was that someone would help us escape or that I would be sent back…

I overheard that if pregnancy failed three times, they would release you if you paid 500,000 MMK [USD 320], so I informed my aunty. The village leaders, the police and Htoi advised my aunty to pay the money to get me back, because it was the only way they could get me back and report and investigate the case.

I came back along with five victims.

I felt ashamed after I came back because all the villagers knew that I was trafficked. But I feel better now. I received legal support and anti-trafficking awareness training from Htoi and I started sharing my experience with friends. I took a class to learn weaving, and now I earn 25,000 MMK for each piece of fabric I sell.”

Aung Ja, now 19, is a trafficking survivor from Kachin, Myanmar who was rescued from China and returned to her village. She is now recovering with the support of a programme implemented by UN Women’s local partner, Htoi Gender and Development Foundation. In less than a year, the programme, funded by the Government of Japan, has already trained 125 trafficking survivors, women in at-risk communities and in Internally Displaced Peoples camps and villages, imparting financial management and marketing skills, linking beneficiaries to training centres and markets. Her story relates to Sustainable Development Goal (SDG) 5 on gender equality and women’s empowerment, which has a target on ending all forms of violence against women, and SDG 16 on peace and justice, which focuses on ending abuse, exploitation, trafficking and all forms of violence.

Related News
03/01/2019
Tackling human trafficking in Myanmar
14/01/2019
A fresh look and a fresh start for survivors of human trafficking in Cambodia
07/12/2022
Speech: Tackling challenges head on
15/11/2021
How women migrants in Thailand are stopping trafficking and gender-based violence in their communities
01/08/2021
Joint statement by UNFPA and UN Women: Impacts of the compounded political and health crisis on women and girls in Myanmar
END_OF_DOCUMENT_TOKEN_TO_BE_REPLACED