Press release: UN Women rallies partners to take a stand against sexual violence on the International Day for the Elimination of Violence against Women

“Orange the World: Generation Equality Stands against Rape!” is the UN theme for this year’s 16 Days of Activism 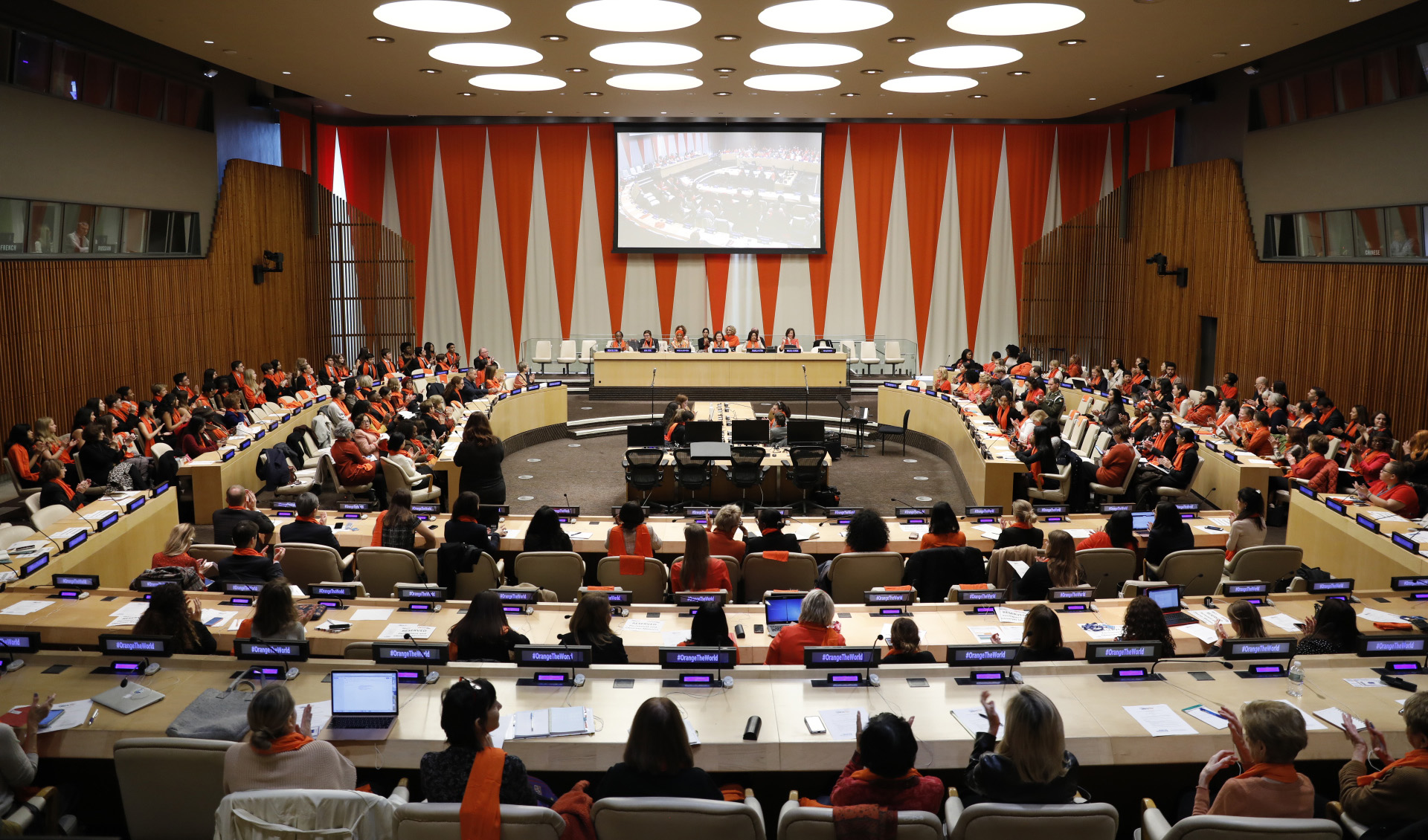 The official commemoration of the International Day for the Elimination of Violence against Women on 25 November in New York. Photo: UN Women/Ryan Brown

From 25 November, the International Day for the Elimination of Violence Against Women, multiple events worldwide, such as marches, art competitions, cycling rallies and marathons will be organized as part of the UN System-wide activities for the 16 Days of Activism Against Gender-Based Violence, to urge actions to end this scourge that impacts one in three women worldwide.

At the UN, the annual 16 Days campaign, which mobilizes governments and public alike, is commemorated under the umbrella of the Secretary-General’s campaign UNiTE by 2030 to End Violence against Women.

The theme of this year’s UN commemoration, which uses the orange colour to symbolize hope and a brighter future without violence against women, is: “Orange the World: Generation Equality Stands against Rape!” The theme highlights the need to end the “rape culture” that is entrenched in our society, whether in situations of conflict, peace, in our homes or on the streets.

“#16Days [of Activism against Gender-Based Violence] is an opportunity to highlight what we are doing and what the situation is, but 365 days is when we do the work.” - @UN_Women Executive Director @phumzileunwomen #GenerationEquality #orangetheworld pic.twitter.com/1UliF8WRtA

Starting from today, for the next #16Days we are joining forces with growing global momentum to stop sexual violence and rape - in peace and as a weapon of war.#orangetheworld #GenerationEquality pic.twitter.com/F6bRCw4aap

Despite worldwide mobilizations led by survivors and activists in recent years through movements such as #MeToo, #TimesUp, #Niunamenos, #NotOneMore, #BalanceTonPorc, and others, sexual violence continues to be normalized and embedded in our social environments. Violence against women and girls continues in every country. From the trivializing of rape, victim-blaming, the objectification of women’s bodies in movies or TV, the glamorization of violence in ads, or the constant use of misogynistic language, we are all daily witnesses to this rape culture, sometimes even silent bystanders, and have a responsibility to stop it. 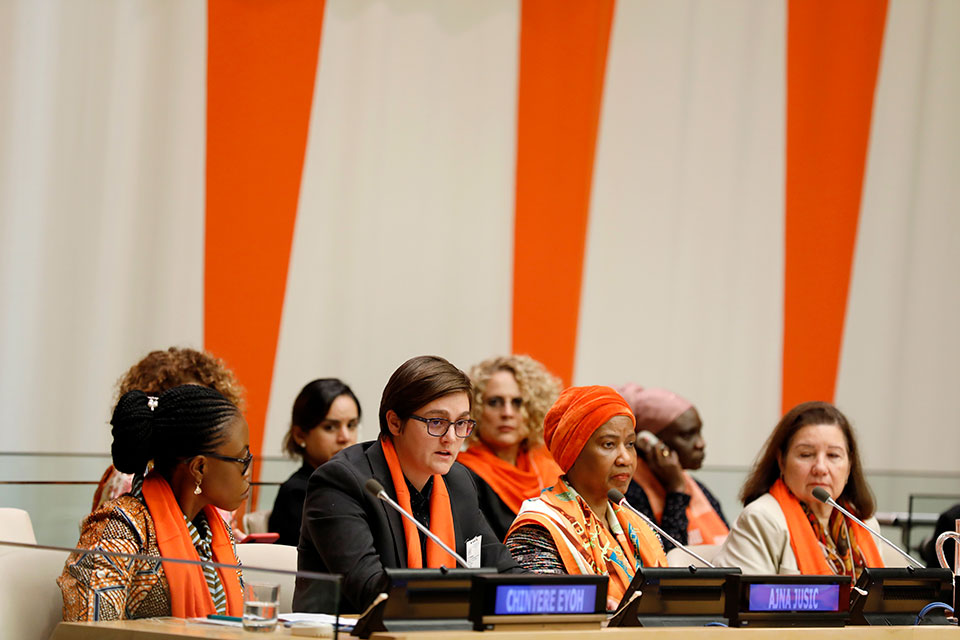 Ajna Jusic, President of the Association “Forgotten Children of War” from Bosnia and Herzegovina speaks at the commemoration of the International Day for the Elimination of Violence against Women on 25 November in New York. Photo: UN Women/Ryan Brown

UN Women Goodwill Ambassador Nicole Kidman has lent her voice to the cause of ending violence against women since 2006. On the occasion of the International Day, she said: “As a UN Women Goodwill Ambassador, I know that we all have a role to play. The 16 days campaign is a moment for the world to come together and take action. I urge you to join the campaign this year to stand against rape and be a part of the efforts to end all forms of violence against women."

As the global campaign kicks off, UN Women’s clarion call is for people to take a stand against the pervasive rape culture that surrounds us. 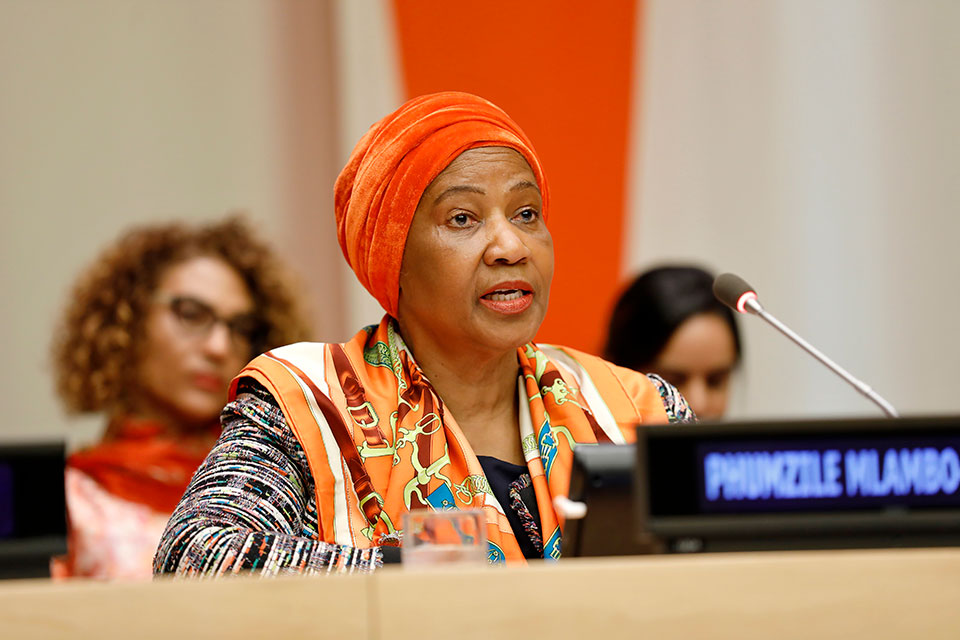 UN Women Executive Director Phumzile Mlambo-Ngcuka speaks at the commemoration of the International Day for the Elimination of Violence against Women on 25 November in New York. Photo: UN Women/Ryan Brown

UN Women Executive Director, Phumzile Mlambo-Ngcuka, said: “Rape isn’t an isolated brief act. It can have life-changing, unchosen effects—a pregnancy or a sexually-transmitted disease, immense trauma and an unwarranted sense of shame. In both conflict and in peacetime, it often shapes women’s decisions to move from their communities through fear of attack or the stigmatization of survivors. If I could have one wish granted, it might well be a total end to rape.”

#UNTF grantee @P4HR joins us for the @UN Official Commemoration of the Intl Day to #EndVAW speaking about ensuring justice for survivors of sexual violence #orangetheworld | #GenerationEquality | #16Days https://t.co/J4H07O235F

"I know that I cannot stop the wars but I can act on behalf of all the children who have been born of rape in war." - @AjnaJusic, President of the Association “Forgotten Children of War” #GenerationEquality | #orangetheworld | #16day pic.twitter.com/41JytIyuFG

Exact numbers of rape and sexual assaults are notoriously difficult to assert due to frequent fear for victims to report it. Yet, approximately 15 million adolescent girls (aged 15 to 19) worldwide have experienced forced sex at some point in their life. Furthermore, three billion women and girls live in countries where rape within marriage is not explicitly criminalized.

One of the key challenges in prevention and eradication of rape and sexual harassment is the issue of consent, and the current lack of understanding that only yes means yes. Equally important is that the consent is offered with free will, without being induced by fraud, coercion, violence or threat of violence, and in the person’s full capacity – which is not the case, for instance, when someone is drunk.

Sexual violence and rape have also been used against women and girls as a deliberate tool in conflicts, such as the war in Bosnia and Herzegovina and Rwanda. In Myanmar, where more than half a million Rohingya have fled the country, rape and other forms of sexual violence have been used as part of the efforts to displace populations. In Syria, sexual violence has been used to extract information from women, and to coerce surrender from male relatives.

As in previous years, iconic buildings and monuments will be lit in orange to call for a violence-free future, including the Magistrate Court of Zimbabwe, the Bibliotheca Alexandrina in Egypt, the Parliament House of Pakistan. The Manneken Pis in Brussels, Belgium, will be dressed in orange. 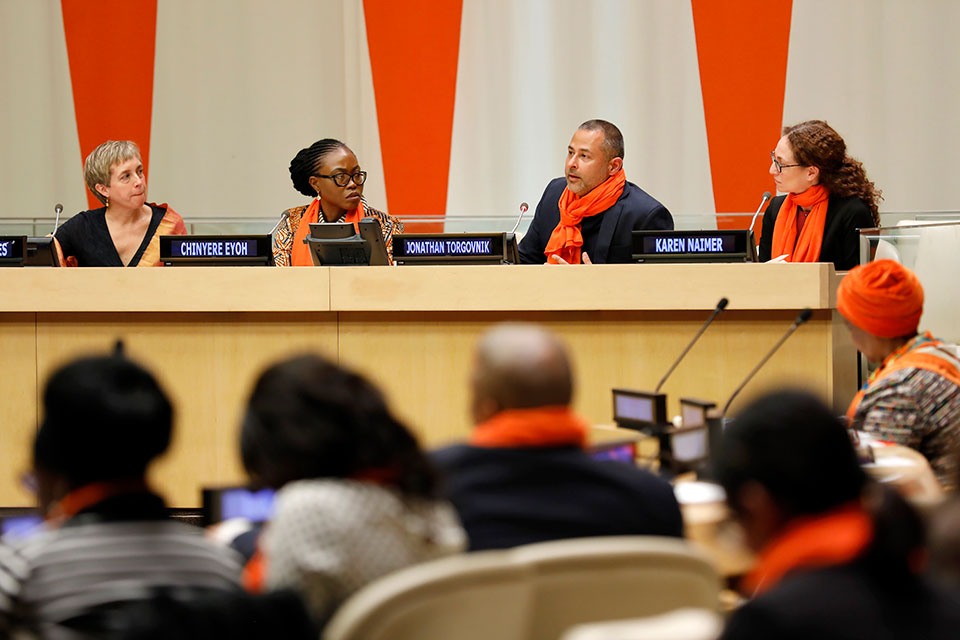 Photographer Jonathan Torgovnik speaks during the official UN commemoration of the International Day for the Elimination of Violence against Women on 25 November in New York. Photo: UN Women/Ryan Brown

An event at the UN Headquarters in New York on 25 November will feature prominent speakers and musical performances to call on preventing and ending violence against women and girls. Participants will include Maria Luiza Ribeiro Viotti, United Nations Chef de Cabinet to UN Secretary General António Guterres, Pramila Patten, Under-Secretary-General, Special Representative of the Secretary-General on Sexual Violence in Conflict; Phumzile Mlambo-Ngcuka, UN Women Executive Director, Susannah Grant, Executive Producer, Writer, Director and Showrunner of “Unbelievable” the Netflix limited series; Ajna Jusic, President of the Association “Forgotten Children of War” from Bosnia and Herzegovina; and photographer Jonathan Torgovnik; as well as musical performances by the choir of the UN International School. Civil society expertise will be represented by two grantees of the UN Trust Fund to End Violence against Women (UN Trust Fund), Chinyere Eyoh and Karen Naimer. 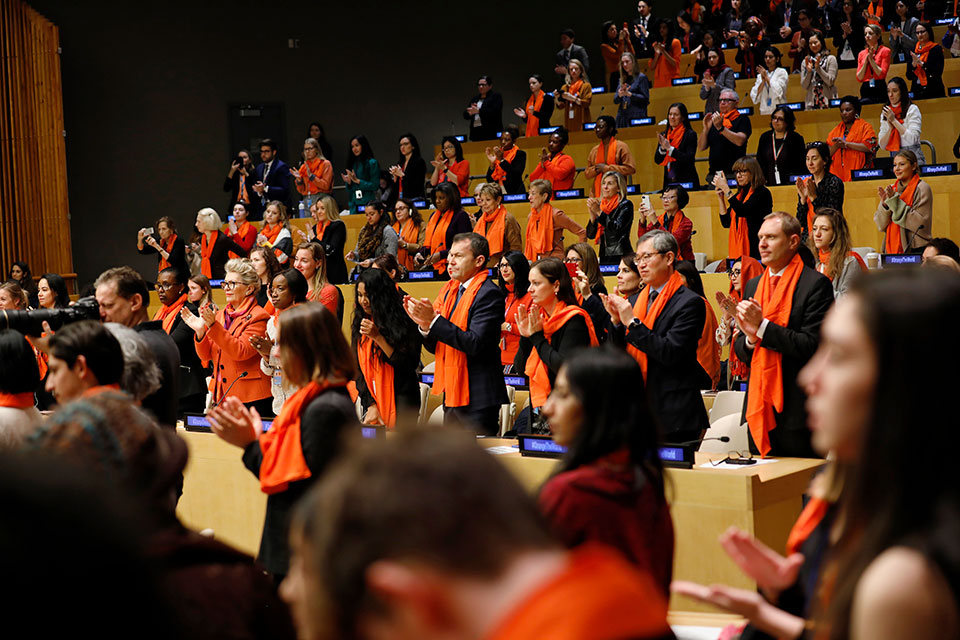 Audience members in orange scarves applaud panel speaker Ajna Jusic during the official UN commemoration of the International Day for the Elimination of Violence against Women took place on 25 November in the ECOSOC chamber of UN Headquarters in New York. Photo: UN Women/Ryan Brown

This year’s commemoration comes on the heels of the first-ever grantee Convention of the UN Trust Fund, which took place in Sarajevo, Bosnia and Herzegovina, from 4-7 November 2019. At the high-level meeting, 150 participants from civil society organizations, government partners and the private sector, implementing around 100 projects around the world, came together to reflect and strategize on how to move the needle on ending violence against women, using their continuous work and experience as the foundation.

Around the world, dozens of events will also help shine a light on the need to step up efforts to end gender-based violence. For instance, murals will be painted on the streets illustrating empowered women and depicting positive gender relations in Malawi; classes on personal safety to interrupt and de-escalate violence using different tools including Aikido martial art will be organized with students of universities and high-schools in Albania; an exhibition of films created by Latin American women followed by live debates will take place in Honduras; a lightning installation featuring twelve artists will be conducted at the Seğmenler Park in Ankara (Turkey) to ‘light the dark’, and hundreds of trees will be planted in Cambodia.