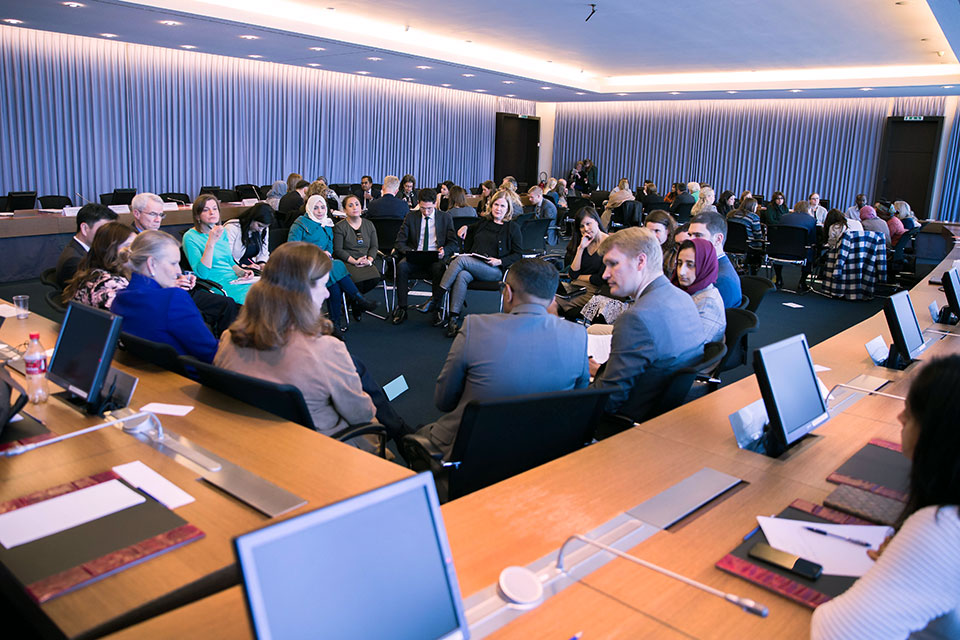 Yemeni women’s rights leaders come together with UN officials at an event titled, “Yemeni women’s leadership in the peace process, humanitarian space and beyond”, taking place in Geneva in the context of the High-Level Pledging Event for the Humanitarian Crisis in Yemen. Photo: WILPF/ Charlotte Hooij

“Women leaders in Yemen are present in regions where international humanitarian actors are not. Women know exactly where the humanitarian corridors are and negotiate access. Everywhere, women are the first responders,” said Muna Luqman, Founder and Chairperson of the Food4Humanity Foundation. “Yet, everyone acts as if we are new to this field. We have always been at the grass-roots level in Yemen and the local people trust us… More must be done so that funds by international organizations are accessible for local women’s organizations. Please listen to us and look at what we are already doing,” she added. 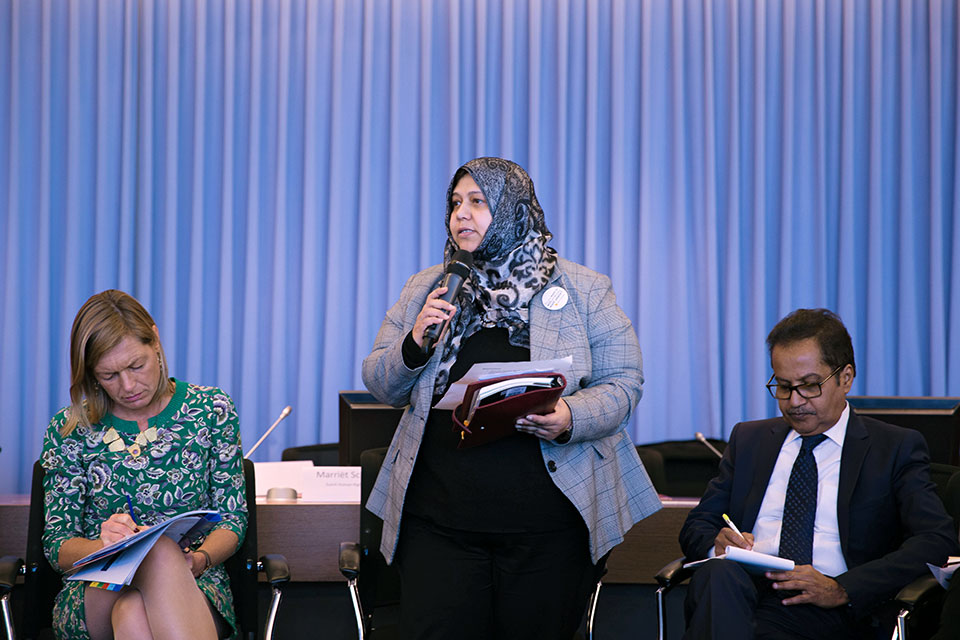 Luqman was among eight Yemeni women’s rights leaders attending an event themed, “Yemeni women’s leadership in the peace process, humanitarian space and beyond”, taking place in Geneva on 25 February, in the context of the High-Level Pledging Event for the Humanitarian Crisis in Yemen. The event was organized by the Permanent Missions of Germany and the Kingdom of the Netherlands to the United Nations (UN), UN Women, CARE International, Women’s International League for Peace and Freedom (WILPF) and Oxfam International.

Following welcoming remarks by European Union Delegation to the UN in Geneva, Walter Stevens, Permanent Representative of Germany to the UN in Geneva Michael Freiherr von Ungern-Sternberg and Human Rights Ambassador of the Netherlands Marriët Schuurman spoke about the need to move from commitment to action securing women’s participation and leadership. Founder and Manager of the Hodeidah Girls Foundation, Dalia Qasem Farea Mohammed provided a personal account of the current situation in Yemen, emphasizing the daily plight of Yemenis and the consistent leadership of women in these times of crisis. 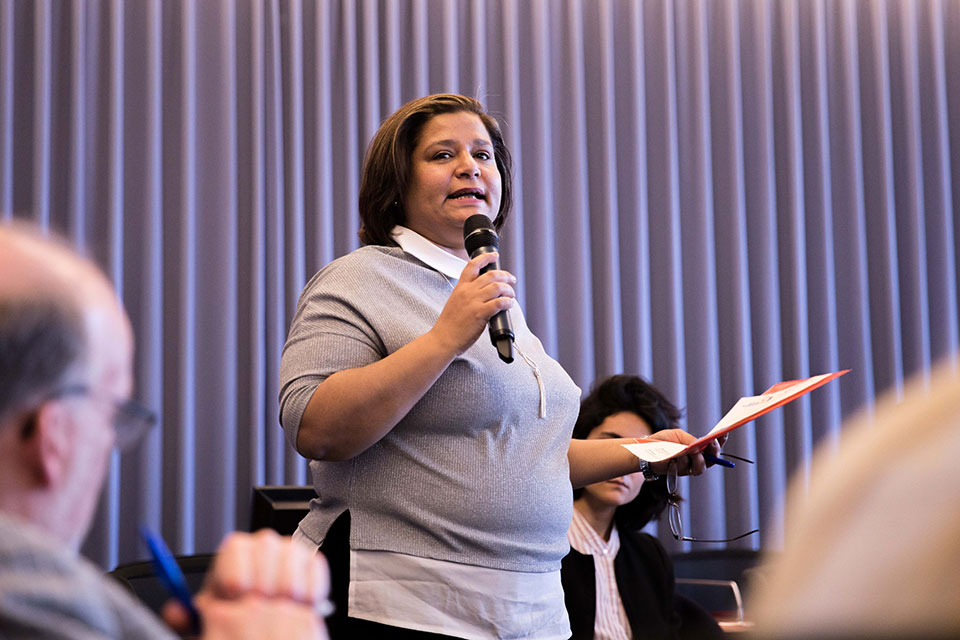 Chairperson of Yemen Aid, Summer Nasser, emphasized the need for expanding women’s livelihoods, funding for local women’s organizations and opening more avenues for women’s participation, as part of international humanitarian response in Yemen. Muna Luqman highlighted the need to have at least 30 per cent women’s representation in the formal peace talks and to keep the seats empty if delegations did not live up to this requirement. She also called for an independent women-led delegation and for gender experts in all teams handling the peace process.

Dr. Aisha Mohammed Thawab, the chairperson of Abs Foundation, spoke about changing gender norms as women become the primary financial care-takers of families and its implications for humanitarian action.  Suha Mohamed Saeed Basharen, a Yemeni community organizer working with CARE International and several other women leaders expressed their concerns about increased gender-based violence and urged humanitarian actors to address the situation. All Yemeni speakers asked for the recognition of women’s roles in peacebuilding and humanitarian response and called upon international actors to listen to women and girls as well as local women’s rights organizations.

During her closing remarks, UN Resident Coordinator and Humanitarian Coordinator Lise Grande noted that, “the overwhelming majority—over 80 per cent—of first responders in Yemen are women; they both know and do more in humanitarian settings.  At the same time, women face more resistance in ensuring the sustainability and continuation of their initiatives, for instance in programmes that address sexual and reproductive health issues. “Women face specific bullying and intimidation that men do not,” she stressed.

UNOCHA Relief Coordinator, Mark Lowcock, assured that he would take the emerging recommendations from the event to the following day’s Pledging Conference and reiterated his support for women’s groups, and for having more women in leadership positions. Winnie Byanyima, the Executive Director of Oxfam International, urged for the inclusion of women’s voices in the Pledging Conference too.

Hiba Qasas, Chief of UN Women Humanitarian Action and Crisis Response Office in Geneva, who moderated the event, said, “UN Women supports women leaders and women’s organizations, as they are the first responders in humanitarian action, and supporting them is a lasting investment in gender equality and women’s empowerment for the future of all people in Yemen.”

The event provided an important and public platform for Yemeni women leaders to discuss important issues with Member States, international NGOs and UN officials involved in humanitarian action in Yemen.

Related News
09/12/2021
Take five: “There are many stories that encourage me to do more”
05/01/2021
Helping survivors of violence seek justice through forensic science in the West Bank
26/10/2020
Two months on, Beirut’s elderly women are still reeling from the blast
05/10/2020
After the Beirut blasts, Lebanon urgently needs medical and mental health care
09/09/2020
Op-ed: A month after the blast, let's rebuild Beirut as the Arab region's first feminist city
END_OF_DOCUMENT_TOKEN_TO_BE_REPLACED