‘Compassion was a key message’

In May 2018, Ireland voted to overturn its near-total ban on abortions—a long-awaited victory for women’s rights activists. 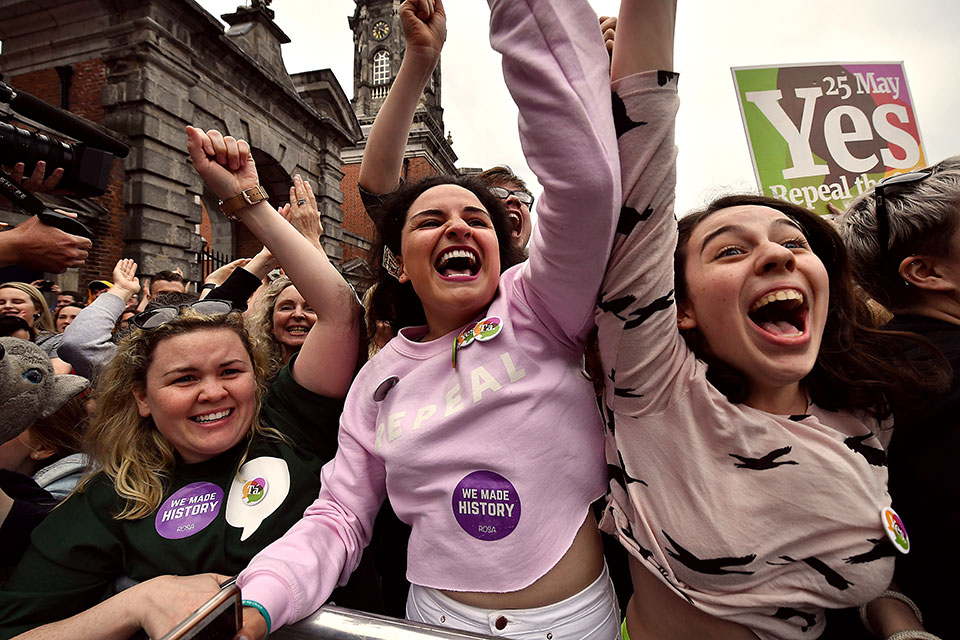 Yes voters celebrate as the result of the Irish referendum on the 8th amendment concerning the country’s abortion laws is declared at Dublin Castle on May 26, 2018 in Dublin, Ireland. Photo: Getty Images/ Charles McQuillan

Annie Hoey walked into the headquarters of Together For Yes in Dublin minutes before the exit poll in the Irish abortion referendum came in on 25 May 2018. When she heard the result, she had to sit down. “There was laughing, screaming, crying, cheering,” says the former president of the Union of Students in Ireland and key Together For Yes campaigner.

Irish citizens had voted overwhelmingly to repeal the eighth amendment, the ban on abortion. With a 64.5 per cent turnout, 66.4 per cent of people voted Yes, while 33.6 per cent voted No.

“The campaign was not led by one group or directed at one group, and that was really important,” says Hoey. “There were heartbreaking stories about the effect of the eighth amendment in every walk of life.”

When launching Together for Yes, youth activists teamed up with veterans who had fought the bitter 1983 referendum that had cemented Ireland’s effective ban on abortion. Back then, some of those campaigners— including Ailbhe Smyth, the co-chair of the Together for Yes campaign— had been publicly denounced for their participation. 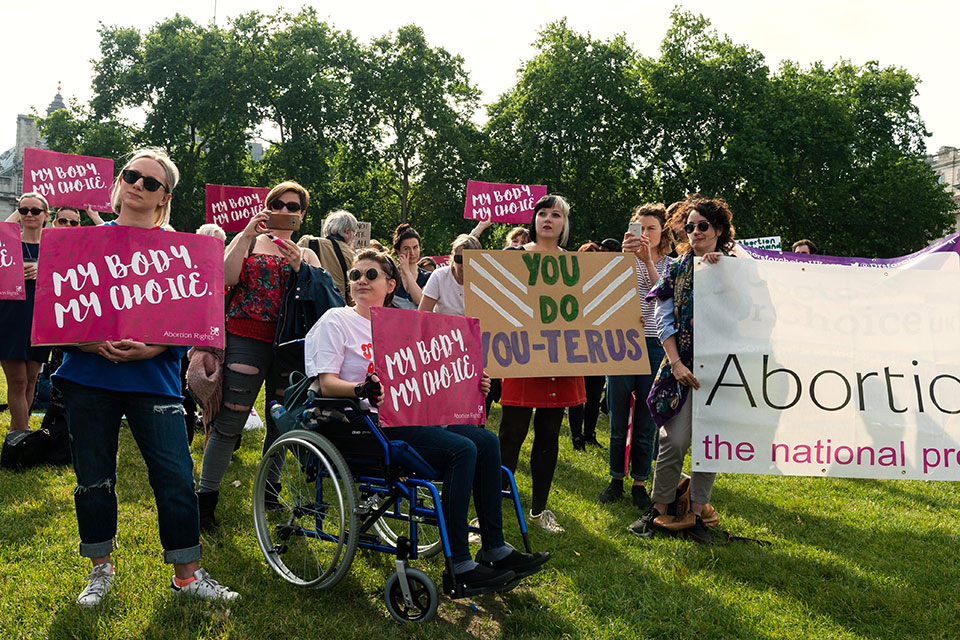 Shortly after the Ireland referendum, protesters in London hold “My Body, My Choice” placards during a pro-choice campaign outside the Houses of Parliament. Photo: Getty Images/ Charles McQuillan

Yet, in the intervening decades, the political and social landscape of Ireland changed and its restrictive abortion laws came under increasing international pressure, both from a 2010 European Court of Human Rights (ECHR) ruling and criticism from the UN Committee on the Elimination of Discrimination against Women (UN CEDAW).

Then, in 2012, 31-year-old dentist Savita Halappanavar died in a Galway hospital after being refused an abortion during a miscarriage. “There was a spontaneous outpouring of sadness and rage,” says Smyth.

After this tragedy, a key strategy for activists pushing to overturn Ireland’s restrictive abortion laws was breaking the silence and enabling people to tell their stories. 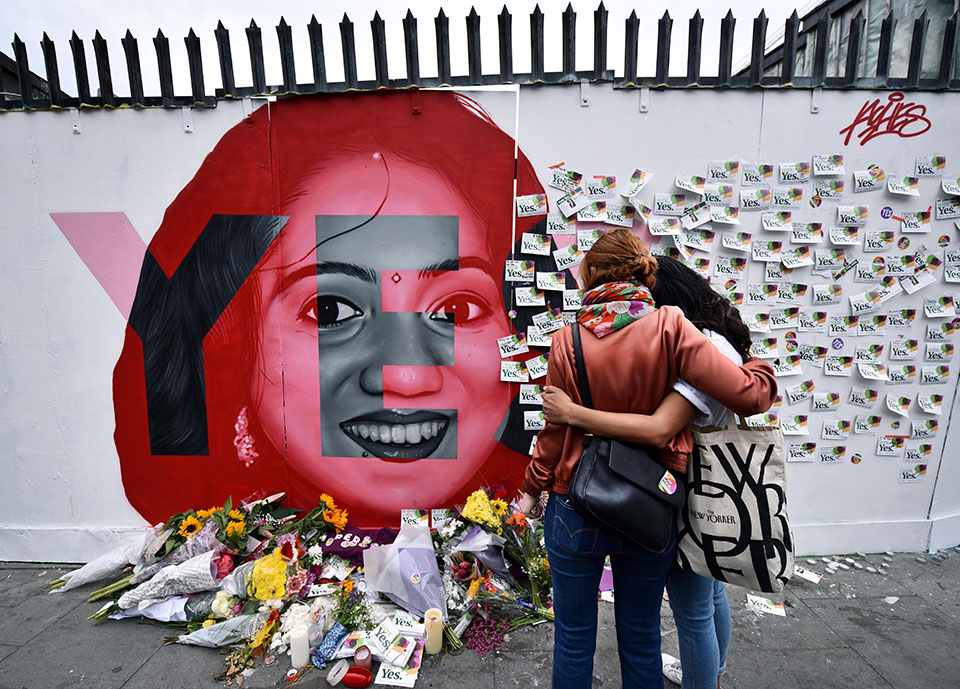 Two women look at written notes left on the Savita Halappanavar mural. Savita Halappanavar, who became the symbol of the Yes campaign, died aged 32, due to complications following a septic miscarriage in Galway in 2012. Photo: Getty Images/ Charles McQuillan

“The most powerful and compelling way to help people understand the urgency of this was to have a woman saying: this is what happened to me,” Smyth says. Storytelling projects—such as In Her Shoes—were launched throughout the country. “Compassion was one of our key messages,” says Smyth. “This wasn’t about whether you would have an abortion, or if you approved of abortion, but were you going to stand in the way of a woman that needed one?”

Irish politician Clare Daly from Independents 4 Change says the tone of the campaign was also key. With 78.3 per cent of the Irish population identifying as Catholic, helping people reconcile their religion with a desire for reproductive rights also played an important role. “It was about positive togetherness. If the opposite side is shouting, be rational and compassionate. Talk about real women,” says Daly.

Jon O’Brien, the president of Catholics for Choice, says the result in Ireland has given an injection of hope to other Catholic countries, such as Argentina, fighting for similar rights. “That this Catholic country, this jewel in the crown, could vote with compassion, that gives hope to Catholic and non-Catholic countries.”

Annie Hoey says that the success of the Together for Yes campaign must now act as a launch pad for further campaigning.

Migrant women, trans people, rural communities— we need to make sure everyone who needs access to abortion will get it,” says Hoey, “both in Ireland and around the world.

Related News
30/11/2022
Statement: For HIV progress – listen, respect, and respond to young women and girls
17/07/2017
Maternal health gets a new boost in Liberia
06/05/2016
Actions intensify in response to the Zika virus in Brazil
01/12/2015
Statement by UN Women Executive Director Phumzile Mlambo-Ngcuka for World AIDS Day
21/06/2013
In Sub-Saharan Africa, AIDS widows strive to regain their rights after husbands are gone
END_OF_DOCUMENT_TOKEN_TO_BE_REPLACED