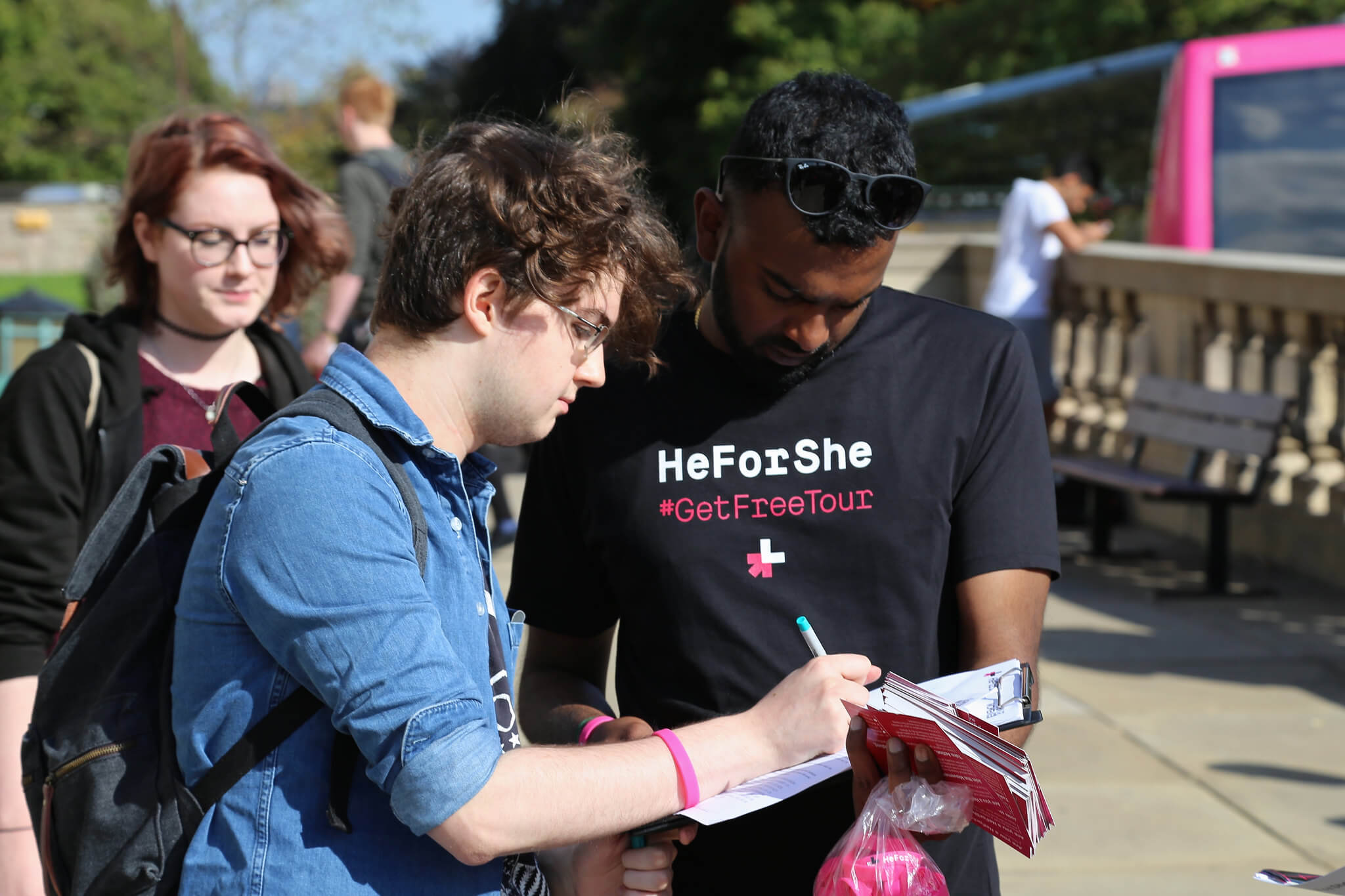 Toronto — HeForShe, the UN Women solidarity movement for gender equality, is embarking on its third #GetFree University Tour and this year, with a focus on engaging students in Canada to take action for a gender equal world.

In Canada, the United Nations is partnering with the Office of the Prime Minister and the CEO of DeBeers Group—both HeForShe Thematic Champions. Prime Minister Justin Trudeau has committed to engage Canada’s youth on the role that young men and boys can play in ending gender inequality. Bruce Cleaver, CEO of De Beers Group has committed to accelerate the advancement of women has provided over 20 scholarships to Canadian women in STEM in the last two years.

“It is inspiring to see that our partnership with De Beers Group has attracted Canada’s leading STEM institutions and brightest young minds to explore how we can work together to create a more equal world”, said Phumzile Mlambo-Ngcuka, Under-Secretary-General and Executive Director of UN Women. “When we speak to students and listen to their ideas around creating change, we gain the necessary perspective and momentum to bring all generations of gender equality advocates together to accelerate progress.”

“De Beers Group is on a journey toward making our company more inclusive and diverse; where everyone feels respected and valued; where diversity of thought, skills and experience is encouraged and welcomed; and where everyone feels safe to speak up and has the opportunity to achieve their full potential”, said Mpumi Zikalala, Managing Director of De Beers Group Managed Operations. “We are proud to bring this message to young people studying at post-secondary institutions across Canada, where our focus is on promoting STEM subjects (Science, Technology, Engineering and Maths) for young women through our scholarship programme. Our ultimate aim is to empower young women and girls to be catalysts for real and lasting change we’re working to bring to our company and communities where we operate.”

This year’s tour will include special guests, including Édgar Ramírez, actor and UNICEF Global Goodwill Ambassador and Paul Brandt, country music superstar and founder of #NotInMyCity. As well, FC Edmonton of the Canadian Premier League will be participating in a co-ed soccer practice with Concordia University of Edmonton’s women’s soccer team which aims to promote gender equality in sports.

The HeForShe team will travel through the Canadian #GetFree Tour stops in an environmentally friendly electric Proterra bus, which meets the sustainability standards of the United Nations Sustainable Development Goals.

About HeForShe: Created by UN Women, the United Nations entity for gender equality and the empowerment of women, the HeForShe solidarity movement for gender equality provides a systematic approach and targeted platform where a global audience can engage and become change agents for the achievement of gender equality in our lifetime. HeForShe invites people around the world to stand together as equal partners to craft a shared vision of a gender equal world and implement specific, locally relevant solutions for the good of all of humanity. Take the first step for gender equality at www.HeForShe.org.

About De Beers Group: De Beers Group is a member of the Anglo American plc group. Established in 1888, De Beers Group is the world’s leading diamond company with expertise in the exploration, mining and marketing of diamonds. Together with its joint venture partners, De Beers Group employs more than 20,000 people across the diamond pipeline and is the world’s largest diamond producer by value, with mining operations in Botswana, Canada, Namibia and South Africa. As part of the company’s operating philosophy, the people of De Beers Group are committed to “Building Forever” by making a lasting contribution to the communities in which they live and work and transforming natural resources into shared national wealth. For further information about De Beers Group, visit www.debeersgroup.com.