Ten defining moments for women in 2020 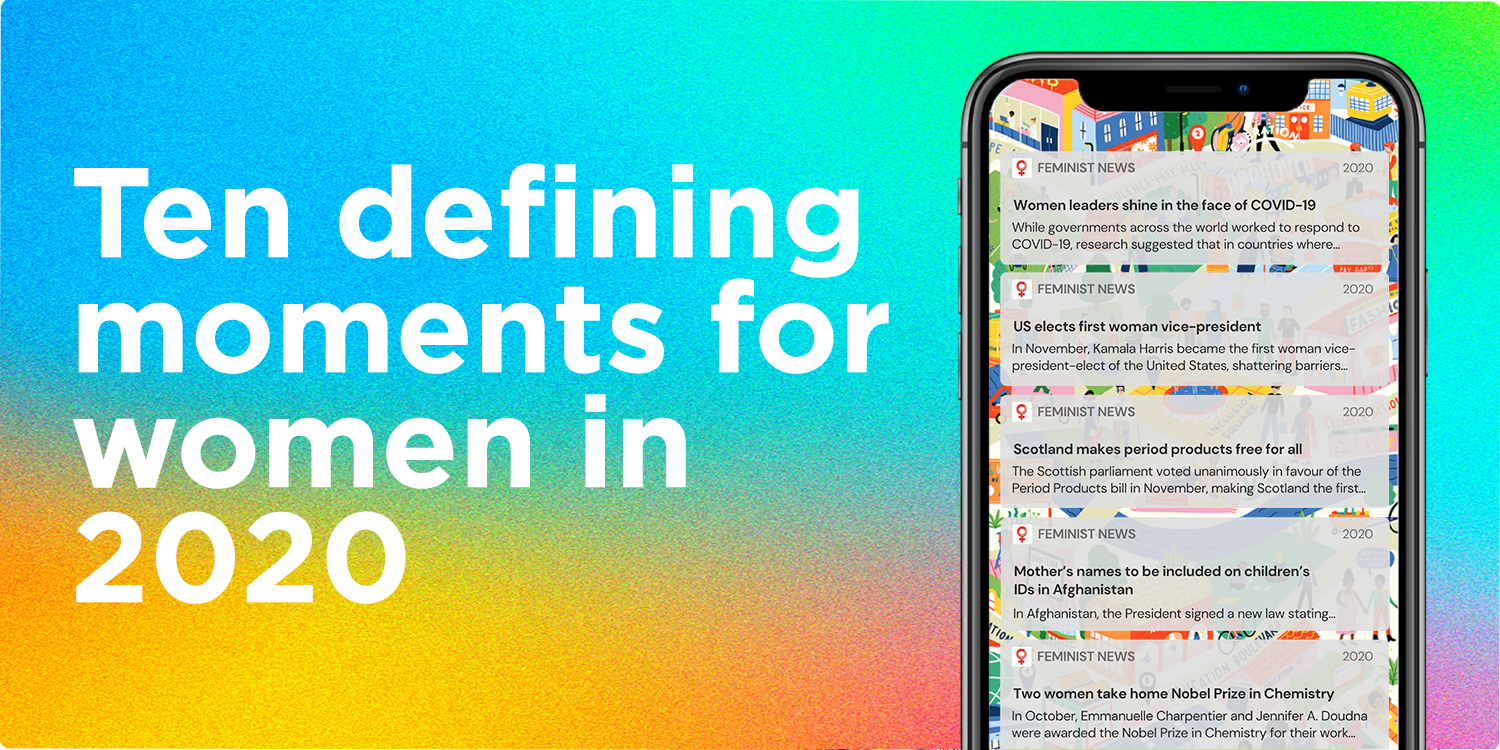 While 2020 will be remembered most for the way COVID-19 changed our lives in nearly every way and in every part of the world, we made some strides for women’s rights and gender equality. From new laws addressing domestic violence and equality to women’s critical leadership during the global pandemic, join us to celebrate some key moments for gender equality this year.

Women leaders shine in the face of COVID-19

Governments across the world worked to respond to COVID-19, with research suggesting that in countries where women lead, the responses were quicker, more effective and stronger. In countries with women leaders, including New Zealand, Germany, Finland, Bangladesh and more, the quick and decisive actions of the women in charge led to lower cases and lower deaths.

Even though COVID-19 has demonstrated the important role of women in leadership and decision-making, as of December 2020, there are only 22 countries with women serving as Heads of State and/or Government worldwide. As we look ahead to building back better in the future, women’s leadership is critical to success.

Congratulations to President-Elect @JoeBiden and @KamalaHarris, who has broken through a glass ceiling for women with her election as Vice President of the United States. #GenerationEquality via @thehill https://t.co/yXtjpAdqdu

In November, Kamala Harris became the first woman vice-president-elect of the United States, shattering barriers that have kept men entrenched at the highest levels of American politics for many years. Following her swearing-in in January 2021, she will join the ranks of other female vice-presidents around the world, in countries including Bulgaria, Nicaragua, Liberia, Costa Rica, Venezuela, The Gambia, South Sudan, and others.

US President-elect Joe Biden also announced an all women senior communications team, a first for the White House.

The Scottish parliament voted unanimously in favour of the Period Products bill in November, making Scotland the first country to allow free and universal access to menstrual products –including tampons and pads – in public buildings including schools and universities.

#ICYMI: Scotland has recently become the first country to allow free and universal access to menstrual products! 👏👏 via @CNN https://t.co/mqFhLwmovW

It marks a significant victory for the global movement against period poverty which impacts women and girls in many ways. With 12.8 per cent of women and girls worldwide living in poverty, the cost of menstrual products and added taxes leave many without ways to safely manage their periods.

In Afghanistan, the President signed a new law stating that for the first time, mothers will be named on their children’s birth certificates and identification cards, making it easier for women to get education, healthcare and other documents for their children. The change will especially benefit women who are widowed, divorced or otherwise raising children on their own.

After years of campaigning, Afghan citizens will soon have their mothers’ names printed along with their fathers’ on their ID cards.

This is a step in normalizing women’s public presence in Afghanistan where it remains taboo.#WhereIsMyName via @nytimes https://t.co/ODgj0CVYU1

The new law comes after a year-long social media campaign #WhereIsMyName, advocating for women’s rights and empowerment in the country.

World leaders reignite the vision of the Beijing Platform for Action

In October, co-hosted by the President of the General Assembly and UN Women, leaders came together to commemorate the 25th anniversary of the Beijing Declaration and Platform for action, the most comprehensive roadmap for advancing gender equality. Over 100 countries committed to concrete actions that would accelerate the realization of gender equality and the empowerment of women and girls everywhere.

"The women of the world believe in the UN & the solidarity of nations. And that ‘We the peoples’ all together, can change the future. It is in our hands."

- @phumzileunwomen at the #UNGA anniversary event for the Beijing Declaration & Platform for Action https://t.co/FXN3OfL7XO pic.twitter.com/PUDTJItYv2

Some of the commitments include eliminating discriminatory laws, social norms and gender stereotypes; matching commitments to gender equality with adequate financing; strengthening institutions to promote gender equality; harnessing the potential of technology and innovation to improve women’s and girls’ lives; and regularly collecting, analyzing and using gender statistics.

Equal pay for women footballers in Brazil and Sierra Leone

Brazil and Sierra Leone have joined Australia, England, Norway and New Zealand in publicly committing to equal pay for women and men footballers. Globally, the gender pay gap stands at 16 per cent, meaning women workers earn an average of 84 per cent of what men earn. For women of colour, immigrant women, and women with children, the difference is even greater.

Brazil's female players like our Goodwill Ambassador Marta will be paid the same as male players.

The country is now one of the few nations to pay their women's and men's football teams equally. 🇧🇷⚽️👏 pic.twitter.com/7fkGOsdLya

In September, Kuwait issued a new law on protection from domestic violence, following years of activism from Kuwaiti women’s rights groups. The law creates a national committee to write policies to combat domestic violence and protect women. It also establishes shelters and a hotline to receive domestic violence complaints, provides counseling and legal assistance for survivors, and allows for emergency protection orders to prevent abusers from contacting their victims.

Although the new family protection law is a step forward for the country with high levels of domestic abuse, much work remains in implementing the law, filling protection gaps and repealing discriminatory laws.

Worldwide, as the COVID-19 pandemic hit, the ever-present pandemic of violence against women surged dramatically. Calls to helplines increased up to five-fold in some countries during the first weeks of the coronavirus outbreak. Projections show that for every three months of lockdown, an additional 15 million women could experience violence. Laws and policies matter right now, to curb violence against women and recover from the social and economic fallouts of COVID-19.

Fifteen-year-old scientist and inventor, Gitanjali Rao, was selected as TIME magazine’s first-ever ‘Kid of the Year’.

From an early age, Rao thought about how to use science and technology to create social change, as motivated by her desire to introduce positivity and community to the world around her. She developed Kindly, an app and a Chrome extension based on artificial intelligence that is able to detect cyberbullying at an early stage. Rao is currently working on an inexpensive and accurate means of detecting bio-contaminants in water.

Nanaia Mahuta became the first indigenous woman appointed as Foreign Minister of New Zealand in November. Mahuta, who is Maori, and was first elected to parliament in 1996, previously made history as the first woman member of parliament to wear a moko kauae, or traditional tattoo, on her chin.

New Zealand appointed its first Indigenous female foreign minister to represent what's shaping up to be one of the most diverse parliaments in the world. via @CNN https://t.co/2LeLSnuYoi

New Zealand also has one of the most diverse parliaments in the world, led by Prime Minister Jacinda Ardern, with almost half of lawmakers being women, and around 10 per cent of incoming parliamentarians being members of the LGBTQ community.

In October, Emmanuelle Charpentier and Jennifer A. Doudna were awarded the Nobel Prize in Chemistry for their work on a way of editing DNA, known as Crispr-Cas9. The two scientists led efforts to turn molecules made by microbes into a tool for customizing genes.

They signify the strength & power of #womeninscience—a field that society historically favors for men.

Dr. Charpentier and Dr. Doudna’s joint win marks the first time in history that the prize has gone to two women, and they are only the sixth and seventh women to win Nobel Prize in Chemistry.