As COVID-19 impacts parents around the world, sharing the care work is critical. This Palestinian couple living in a refugee camp in Lebanon shows how it’s done. 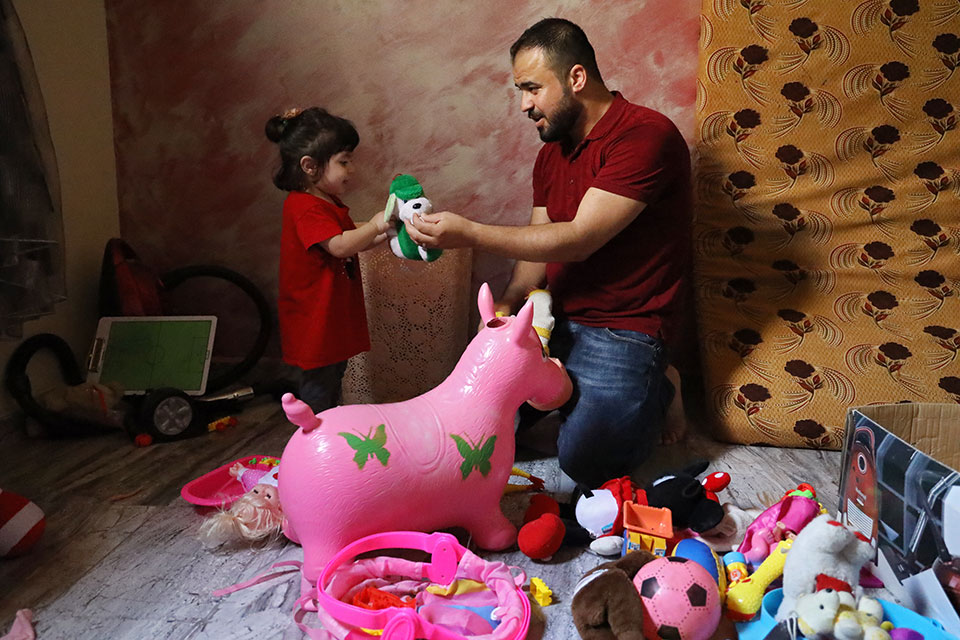 In a community that views men who share domestic and care work as a sign of weakness, even emasculating, Mahmoud Charary stands out as an exception. But not for too long, he hopes.

Malak and Mahmoud Charary are a young Palestinian couple living in a refugee camp in Lebanon and parents to a one-year-old girl. “Women should not only be perceived as mothers and responsible for the home; they are an integral part of the community who have demands, needs, and likes and dislikes of their own,” says Mahmoud Charary.

“My wife and I share responsibility in everything at home, and I am proud of it. I cook, clean, do the laundry, care for my baby daughter and wife, which grants Malak time for herself and for her work. I don’t expect to be awarded for it, rather I believe it is my responsibility,” he adds.

Both parents consider themselves as primary caregivers of Jouri, their joyful daughter. Their 90-year-old great aunt who lives with them also cares for her and Mahmoud’s mother helps when she can.

Malak Charary appreciates her husband’s involvement with her daughter’s care. She had lost her father at the age of 10 and was raised by her uncle. Determined to complete her education, she took on a three-hour commute to the university every day to graduate with a degree in Pharmacy. Palestinian refugees are not allowed to work as pharmacists in Lebanon, but Malak found work as a local pharmacist within the UN clinics at refugee camps. As COVID-19 pandemic reached Lebanon, she worked long hours on the front line of the crisis during the lockdown, leaving Mahmoud to care for their daughter.

Having lived in Al Rashidieh camp all their lives, the second most populous Palestinian refugee camp in Lebanon, the couple have endured a lot of insecurity, including the prevalence of arms and drugs and restrictive social norms that discriminate against women and girls.

“The involvement of Mahmoud with childcare and house chores allowed me to go back to work when my daughter was only one month old,” shared Malak. “My job is very important to me, not only for the financial security it gives us as a family, but also because I value my independence”. 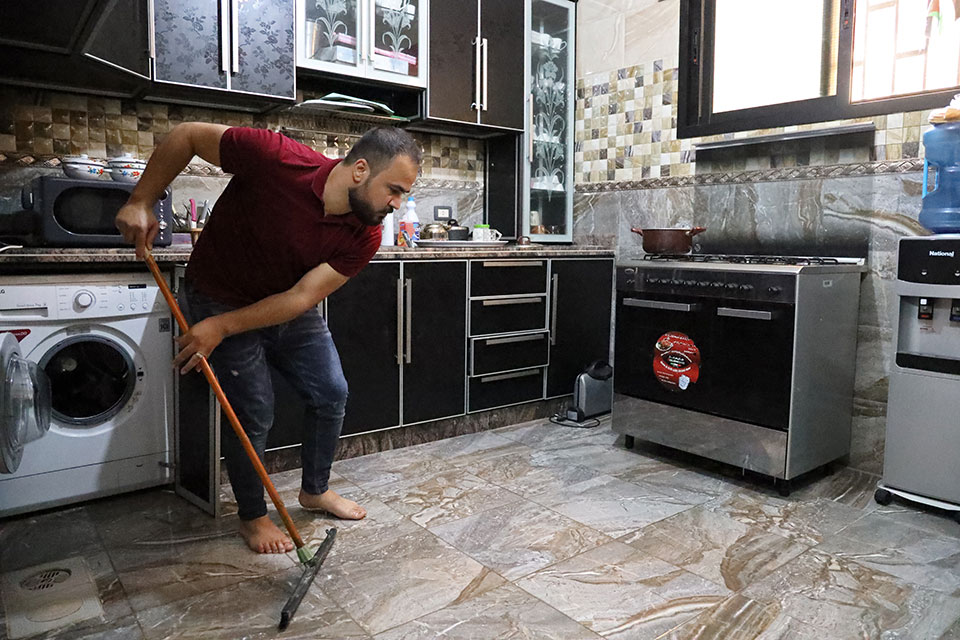 Mahmoud cleans the kitchen floor while his spouse Malak is at work Photo: Ramzi Haidar/Dar Al Mussawir for UN Women

Mahmoud credits some of his values to his involvement as a volunteer with Al-Jalil Organization for Development, a community-based organization supported by UN Women’s “Men and Women for Gender Equality” regional programme. The programme, funded by the Government of Sweden, works with local communities as well as governments to promote positive masculinity and gender equality in six Arab States countries.

Mahmoud became a strong believer in the importance of changing attitudes towards gender norms in his own community and kept going back for more training. Today, the 27-year-old leads youth-led activities in the camp, including football and basketball training for young girls and boys as entry points to integrate gender-equitable attitudes.

His egalitarian views about childcare and housework were not well-received by the community members initially. Community leaders within the Al Rashidieh camp had criticized several organizations for challenging traditional gender roles, but Al-Jalil eventually improved the relationship with community leaders and is slowly building consensus that gender equality at home makes for better homes and healthier communities.

“Mahmoud’s positive influence on his peers, his young trainees and his family has become obvious since he joined our programmes. His own personality and views on gender equality have also changed,” said Hussein Charary, the Managing Director of Al-Jalil Organization. Over the years, Mahmoud has inspired many other men and women to practice equality within their homes, including his own father and sister.

“Only 12 per cent of men in Lebanon say they perform routine care and supervision of their children. This means that most of the childcare work is done by women,” said Rachel Dore-Weeks, Head of UN Women office in Lebanon. “Fathers that share the care work enable their wives to join the labor market and keep their jobs. Having both parents working is especially important under the current economic downturn brought on by COVID-19. We are running an awareness and behaviour change campaign, ‘Because I am a man’, to promote positive masculinity and men’s engagement to achieve that.” 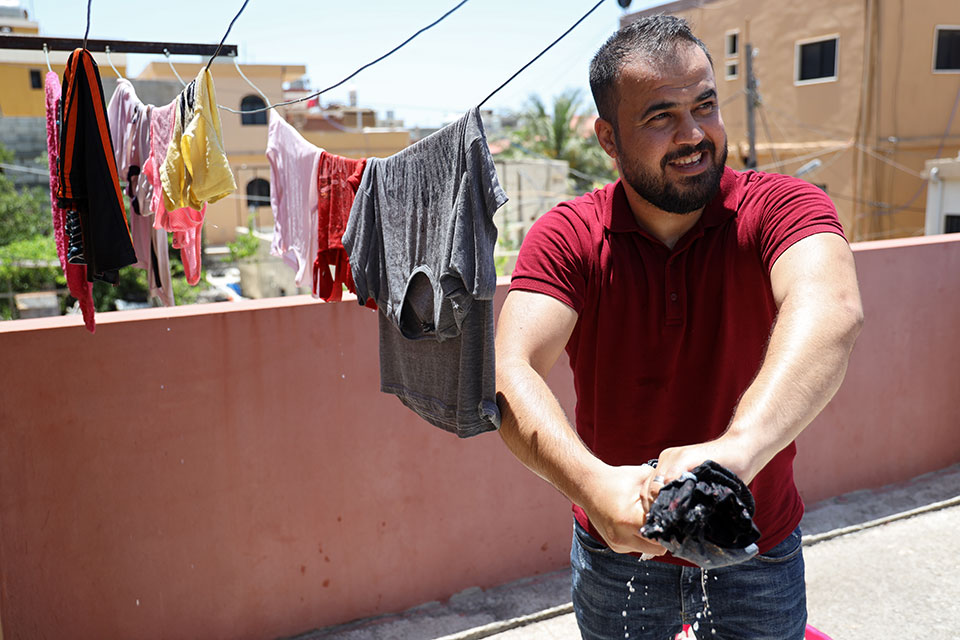 Mahmoud became a strong believer in the importance of changing attitudes towards gender norms in his own community. Photo: Ramzi Haidar/Dar Al Mussawir for UN Women

“Men sharing house chores doesn’t make them less of a man, on the contrary, it creates a great sense of achievement,” says Mahmoud Charary. “Women’s role goes way beyond the home. Women can be creative and successful in every job they perform.”

From domestic chores to caring for loved ones, around the world people collectively spend 16 billion hours on unpaid care work every day. The backbone of thriving families, communities and economies, this work largely falls on women—and increases in times of crisis. As some countries are still battling COVID-19, while others are putting in motion recovery plans, valuing and redistributing unpaid care work must be part of building back better.

How can you help?

Related News
27/01/2022
Gender equality starts at home: How three couples in Lebanon are reshaping norms
10/03/2021
This is what leadership looks like: Meet Caroline Fattal, one the “most powerful Arab women in business” dedicated to supporting Lebanese women entrepreneurs
22/12/2020
Amidst multiple crises, a Syrian in Beirut uses new skills to make a living
17/11/2020
What happened after COVID-19 hit: Lebanon
03/09/2020
In Palestine one couple shows the benefit of sharing the care at home
END_OF_DOCUMENT_TOKEN_TO_BE_REPLACED