This is what leadership looks like: Justice Lisa Ramsumair-Hinds, a judge from Trinidad and Tobago, is promoting gender-sensitive adjudication globally

Justice Lisa Ramsumair-Hinds, a judge in Trinidad and Tobago, is a champion for gender-sensitive adjudication, raising awareness and sharing her knowledge around the world. She talks about how support at home and mentorship from other judges played a crucial role in her success. 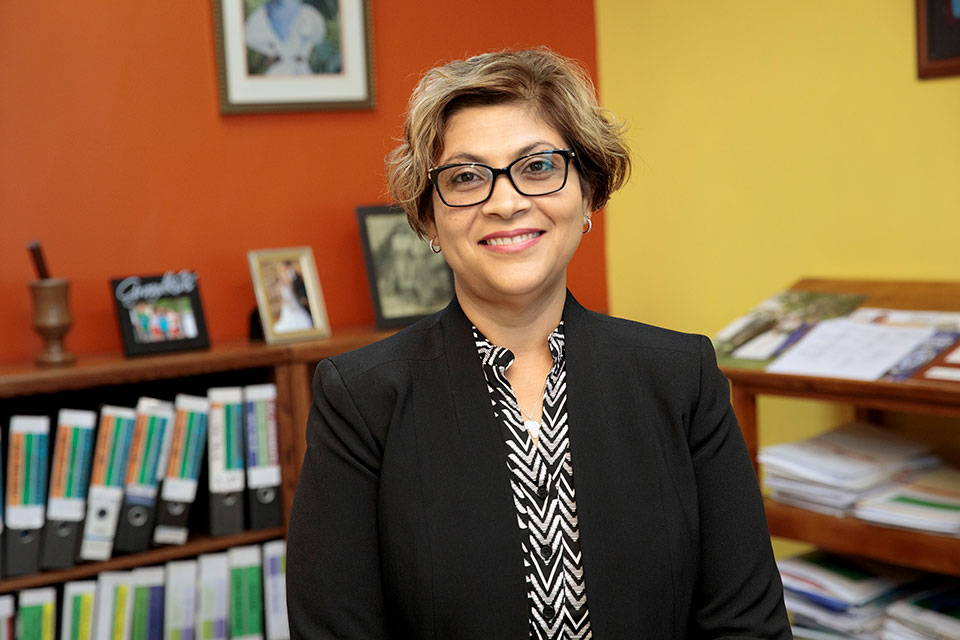 “What keeps me going? The many women and girls who still need help,” says Justice Lisa Ramsumair-Hinds. “I am a part of the solution from within [the justice system].”

Justice Ramsumair-Hinds wanted to be lawyer since she was in primary school. She began her career as a prosecutor in Jamaica, where she says, “so much was done with precious little in the way of resources.” She returned to her home country, Trinidad and Tobago, and continued to practise law.

“I grew increasingly frustrated by the culture of adjournments,” says Justice Ramsumair-Hinds. “Time, effort and resources were wasted, at the expense of liberties, with little emphasis on social justice.”

In 2006, when her husband saw an advertisement for magistrates, he encouraged her to apply, saying, “change the system from within.” Justice Ramsumair-Hinds was sworn in as a magistrate in 2007 and after a decade in the summary courts, became a judge in 2017.

She remains inspired to change the system from within and says: “Women and girls have out-performed their male counterparts at every level of education [in Trinidad and Tobago]. At present, 66 per cent of our magistrates and 77 per cent of our High Court judges are women. Yet, for all the gains in academic circles and judicial appointments, society still labours under toxic manifestations of patriarchy.”

“Until we demand a genuine end to gender-based violence, we will keep advising girls to avoid ‘allowing’ themselves to become victims of rape, instead of making their attackers accountable,” says Justice Ramsumair-Hinds.

Paving the way for women’s leadership through mentorship and support

Justice Ramsumair-Hinds credits the support of her husband and the mentorship from three regional judges for her professional growth.

“I have benefitted from having a life partner who promotes gender equality,” says Justice Ramsumair-Hinds of her husband. “He facilitated many of my professional initiatives, including my thirst for continuing education and advocacy, by carrying the lion’s share of domestic and parenting duties, although he was also working full-time.”

Speaking of her mentors, the three judges who presently sit at the Caribbean Court of Justice, the apex court in the region, she says that they are “champions for equal access to justice.” They introduced Justice Ramsumair-Hinds to women judges’ organizations, three of which she is now a member of, and have been instrumental in facilitating her collaboration with UN Women on institutional capacity building and judicial accountability towards eradicating gender-based violence through the Caribbean Association of Judicial Officers (CAJO).

Since 2015, Justice Ramsumair-Hinds has been actively involved in a UN Women/CAJO collaboration under the Caribbean Court of Justice Judicial Reform and Institutional Strengthening (JURIST) project, funded by the Government of Canada.

“Under COVID-19 constraints, I facilitated virtual training sessions on our domestic violence legislation to over 600 attendants”

“One major accomplishment was the development of a draft ‘Gender Protocol for Judicial Officers’ which was handed over to regional chief justices,” says Justice Ramsumair-Hinds. The protocol provides guided questions for judicial officers to help them recognize and eliminate gender biases and to strive for gender equality in the adjudication process. “Since then, three out of four regional judiciaries have launched their individualized Gender Protocols.”

Justice Ramsumair-Hinds also participated in a UN Women/CAJO regional train-the-trainer programme on gender-sensitive adjudication, and has since been facilitating sessions in Trinidad and Tobago and in other parts of the Caribbean. The training strengthens the ability of judicial officers to identify gendered impediments to access to justice. For example, they teach judicial officers how to ensure that cross-examination of a victim of sexual violence does not re-victimize the victim, and when adjudicating a domestic violence case, selecting a date of adjournment when the woman survivor can attend, since women often have limited sources of income and cannot easily sacrifice a day’s wages or find childcare arrangements.

“From December 2020 to February 2021, under COVID-19 constraints, I facilitated virtual training sessions on our domestic violence legislation (which underwent a major overhaul in 2020) to over 600 attendants, which included judicial officers, judiciary staff (at various levels) and external justice sector partners,” she says. “Raising awareness is integral to advocacy.”

“In 2018, I was partnered with judicial officers and other justice sector stakeholders in South Africa, through the UN Women South-South Exchange. That was followed by an invitation to return to South Africa the following year, during the 16 Days of Activism against Gender-Based Violence. Knowledge sharing has been critical in my personal development as a woman judge.”

In March 2021, Justice Ramsumair-Hinds will begin training judicial officers in Nigeria in gender-sensitive adjudication and support the development of their own gender protocol, another connection made by UN Women.

“I am proud that this little Indian girl from a broken home, who grew up without indoor plumbing for years, and had no money to commute to school, made it this far and at a younger age than most,” says Justice Ramsumair-Hinds. “When I apply an understanding of intersectionality to my story, I know that I have been fortunate. My hope is that more little girls with humble beginnings can fulfill their potential.”

Related News
03/04/2018
In the words of Lilian Soto: “The presence of diverse women in politics generates different kinds of public policies”
06/06/2016
From where I stand: Lucía del Socorro Basante
02/03/2015
“We ourselves are here for repurposing – to exchange ways for ensuring more and substantive women's leadership and women’s power” – UN Women Executive Director
24/02/2015
UN Women Executive Director to co-host Beijing+20 “Women in Power and Decision-Making” high-level event in Chile
16/07/2014
‘Ready for the lists’, say Uruguayan women
END_OF_DOCUMENT_TOKEN_TO_BE_REPLACED