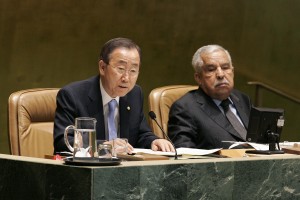 In a bid to accelerate the empowerment of women, the General Assembly today voted unanimously to create a dynamic new entity merging four United Nations offices focusing on gender equality, a move hailed by Secretary-General Ban Ki-moon and other senior officials.

“The newest member of the UN family has been born today, Mr. Ban told the Assembly after it passed the resolution setting up the new UN Entity for Gender Equality and the Empowerment of Women, to be known as UN Women.

“This is truly a watershed day, he declared.

“By bringing together four parts of the UN system dedicated to women's issues, Member States have created a much stronger voice for women and for gender equality at the global level, said the Secretary-General.

“It will now be much more difficult for the world to ignore the challenges facing women and girls — or to fail to take the necessary action, he added.

UN Women is the result of years of negotiations among Member States and advocacy by the global women's movement. Set to become operational next January, it will drive the world body's efforts to promote women's rights.

UN Women is set to have an annual budget of at least $500 million — double the current combined resources of the four agencies it will comprise.

Mr. Ban acknowledged that many Member States are facing resource constraints due to the global economic downturn, but expressed confidence that the new office will receive strong financial support.

She noted that while the UN has made significant strides, it has also faced serious challenges such as inadequate funding and fragmentation.

One of the main goals of UN Women will be to support the Commission on the Status of Women (CSW) and other inter-governmental bodies in devising policies.

The new body will also aim to help Member States implement standards, provide technical and financial support to countries which request it, and forge partnerships with civil society.

Within the UN, it will hold the world body accountable for its own commitments on gender equality.

“UN Women will give women and girls the strong, unified voice they deserve on the world stage, Ms. Migiro said, calling today a “positive and exciting moment for the entire UN family.

The UN, said General Assembly President Ali Treki, is “uniquely placed to take the leading role on the issue of promoting women's rights, expressing his delight at the creation of UN Women.

Related News
18/02/2019
Take five: “One of the main obstacles to gender parity is the glass ceiling”
20/03/2018
Coverage: System-wide Strategy on Gender Parity: How to walk the talk?
29/06/2016
“We appreciate your strong recognition of our achievements” —Executive Director at Executive Board
17/04/2012
UN Women welcomes a landmark action plan to measure gender equality across the UN system
09/02/2012
Women’s Empowerment Is Central to Global Sustainability, Says New UN Report
END_OF_DOCUMENT_TOKEN_TO_BE_REPLACED