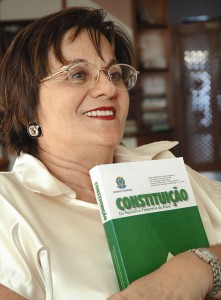 In May 1983, biopharmaceutist Maria da Penha Fernandes was fast asleep when her husband shot her, leaving her a paraplegic for life. Two weeks after her return from the hospital, he tried to electrocute her.

The case da Penha filed languished in court for two decades, while Maria's husband remained free. Years later, in a landmark ruling, the Court of Human Rights criticized the Brazilian government for not taking effective measures to prosecute and convict perpetrators of domestic violence. In response to this, the Brazilian government in 2006 enacted a law under the symbolic name “Maria da Penha Law on Domestic and Family Violence.

On the fifth anniversary of Law in August 2011, the National Council of Justice of Brazil collected data showing positive results: more than 331,000 prosecutions and 110,000 final judgments, and nearly two million calls to the Service Center for Women.

Positive results that da Penha shares with some reservations.

“Before the Act, the domestic violence was a crime considered of low potential offensive, she says. “That reality has changed, and indeed in all the places I go to give talks women find themselves ‘saved by the Law,' but we need more financial resources to implement it in all its power.
The Maria da Penha Act establishes special courts and stricter sentences for offenders, but also other instruments for the prevention and relief in cities of more than 60,000 inhabitants, such as police stations and shelters for women.

“The problem is not the law but in its application, insists da Penha. “Unfortunately, these instruments exist only in big cities.

With an average of ten murders a day, data on domestic violence in Brazil are still alarming.

“It is necessary to sensitize and train those involved in the fight against violence, but we have many people involved, men and women who live and dream of a more humane society for their children and grandchildren, she concludes.

UN Women collaborates with the Avon Institute in raising awareness on domestic violence and publicizing the law through a dedicated website www.quebreociclo.com.br (“break the cycle).

On the fifth anniversary of the Maria da Penha Law, UN Women, UNISIDA, UNFPA and UNICEF launched the campaign “Women and Rights. The campaign includes three films, which assesses the contribution of the Law and the network of care services for women survivors of violence.

Maria da Penha interview for the documentary, “Giving Voice to Women: Violence against Women in the Southern Cone

Related News
10/04/2013
Thailand launches One-Stop Crisis Centre to respond to violence against women
04/04/2013
Femicide in Latin America
19/09/2012
Haiti: Efforts at the local level to improve Women’s Access to Justice and Security
01/08/2011
Police and Judges against Gender Violence in the Southern Cone
17/11/2020
What happened after COVID-19 hit: Lebanon
END_OF_DOCUMENT_TOKEN_TO_BE_REPLACED