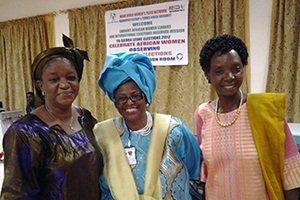 Zainab Bangura, the Secretary-General's Special Representative on Sexual Violence in Conflict, Yvette Chesson Wureh, founder of the Women's Situation Room in Liberia, and Josephine Odera, Regional Director for UN Women in West Africa, raise awareness for the WSR in Sierra Leone ahead of the 17 November elections. Photo credit: UN Women

“Look here, Peace is in my hands. Peace is in our hands," said Ms. Maude Peacock, President of the national umbrella organization Women's Forum Sierra Leone (WFSL). “The benefit of peace far outweighs the benefit of war, I can assure you."

After so many years of suffering from widespread violence, Sierra Leone is coming to grips with its past and facing a future of peace with the help of the Women's Forum, which leads the coalition of women driving the Women's Situation Room (WSR) for peaceful elections in Sierra Leone.

The initiative aims to mobilize, harness and employ the expertise and experiences of women in taking action to prevent or mitigate potential conflicts and other threats that could emerge before, during and after the local, parliamentary and presidential elections in Sierra Leone on 17 November, 2012.

It aims to create a space for consultations with all parties involved in the elections and encourages women to be involved in peace advocacy, mediation, coordination, political analysis, observation and documentation. It is not so much a room, but a safe space for peaceful process.

UN Women has provided support to establish the Situation Room and to various organizations in support of women's political participation in Sierra Leone.

The launch of the Women's Situation Room in September 2012, organized by the Women's Forum included many representatives of various organizations - the Government, United Nations, the diplomatic corps, regional and international organizations, civil society and youth organizations - under the chair of the Registrar of the Special Court for Sierra Leone Ms. Binta Mansaray.

In the lead-up to the elections this week, Sierra Leone's Women's Situation Room held a press conference alongside women leaders and delegations from across the African region.

“The very fact that the Women's Situation Room is deploying across the 14 districts in the country with more than 300 observers is building confidence in voters, particularly women voters. Also, Women feel safer when they see other women as part of security forces during the election process, said Ms. Yasmin Jusu Sheriff, Regional President of the Mano River Women's Peace Network (MARWOPNET).

Her organization works alongside the Women's Forum, established in 1994 in recognition of the need to have a network of women's organizations for information exchange and influencing of policy geared towards women's empowerment to contribute to national development.

The Women's Forum was instrumental in bringing together women's organizations in 1996 to take a collective stance on the call for elections before peace - an event that kick-started democratization in Sierra Leone. Additionally, the Women's Forum took the lead in advocacy on a number of national issues, including the call for rebels to lay down their arms and promoting gender concerns.

The concept of the Women's Situation Room was introduced by Liberian women peace leaders and activists and was first implemented under the leadership of the Angie Brooks International Center during the Liberian 2011 Presidential and Legislative Elections.

It was recognized as a Best Practice by the ‘Gender is My Agenda Campaign' of the African Union to be replicated in all African countries holding elections, with Liberian President Johnson Sirleaf elected to be the champion of the Women's Situation Room.

The concept was successfully reproduced during the Senegalese elections of 2012. It will now be put to the test during Sierra Leone's elections this Saturday.