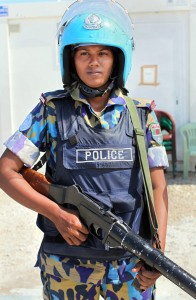 One of the 102 women serving with the UN's all-female Bangladeshi contingent. The feminization of the peacekeeping force helps the UN establish better relations with women in its fight against sexual violence. Photo Credit: UN Women/Hadrien Bonnaud

The International Day of United Nations Peacekeepers, commemorated each year on 29 of May, is an occasion to salute the 120,000 peacekeepers serving in 17 missions in some of the world's most volatile and dangerous environments. In the United Nations Stabilization Mission in Haiti (MINUSTAH), the Bangladeshi contingent is composed entirely of women. Leading by example, the 102 women contribute to restoring peace and security in the Caribbean island, with a specific focus on ending violence against women.

What kind of impact do women officers tend to have on communities in Haiti, and women in particular?

My troops attended trainings on the code of conduct, and trainings on sexual exploitation and abuse. We noticed that the impact of women as peacekeepers is that it strengthens psychological support for victims, so that they feel more comfortable reporting sexual or physical violence. They feel more secure with them than a male officer. We noticed that with women, female victims receive more patience; females can understand harassment better. They can also counsel on different issues such as health, education, finance and household affairs.

What are the main challenges for women in Haiti today, and have you seen much progress?

The main challenges for women in Haiti are to be better protected against violence and gender discrimination, to be economically independent and to increase their participation and involvement in central and local government. There are changes, such as the infrastructural development in different areas in Port-au-Prince and the relocation of displaced people to better residential areas. More children go to school now than before. But there are still major challenges to reduce rape and sexual violence.

How have you been addressing sexual violence issues in Haiti?

To address sexual violence, providing security is important. If a victim of sexual violence reports the crime, the perpetrators may threaten her; if she doesn't, then they may abuse her silence. So security and emotional support should be given simultaneously.

How does your unit deal with being away from their families, in a country where the language, food and culture are so different?

Yes, it is hard, but the women officers manage. They have access to the internet and mobile facilities, so they communicate daily with their family members. Also, they feel proud to work under the flag of an international organization; it proves their capabilities to work for peace.

As a woman and a leader within the UN Police, do you think women are being seen as agents of change?

Our women's contingent will have a long term impact on the Haitian people, especially on women and girls. Most of the women welcome our presence and activities. They see us as a symbol of women's empowerment and feel inspired to be established socially and economically.

Related News
27/05/2020
On the front lines of COVID-19, women’s organizations provide vital services as first responders as violence against women spikes
09/08/2017
From where I stand: “A big part of being a feminist is to make sure that young women know that they have rights”
15/11/2021
From where I stand: “Our territories are our futures.”
21/10/2021
Statement by Celia Umenza Velasco at the UN Security Council Open Debate on Women, Peace and Security
14/10/2021
Your questions answered: Women in Haiti
END_OF_DOCUMENT_TOKEN_TO_BE_REPLACED