When it comes to mobilizing youth, a good Tweet goes a long way, or in China, as the case may be - a good Weibo message in 140 characters or less. Add the voice of a young celebrity or two to the mix, and you could have yourself a critical digital mass. 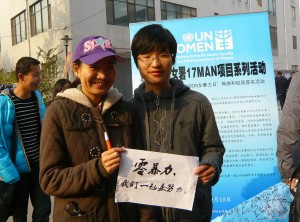 “Social media can access and motivate huge audiences across the country, and done the right way, it can even open up a topic that is rarely publicly discussed in China, such as violence against women and girls, notes Julia Broussard, UN Women's Country Director in China. “It is an ideal way to encourage young people to reflect upon gender issues - and when you have celebrities like Chen Kun on board with your campaign with you, interest explodes.

Hosted by UN Women and organized by Eastern Campus since early 2011, the “17 MAN programme has been deftly using social media and youth role models to encourage deeper thought on gender roles, and the way that inequalities and stereotypes can lead to violence, particularly among young men. It has so far reached more than 100,000 young people. The pronunciation of “1 and “7 in Putonghua sounds the same as “together.

The campaign has been engaging students across top university campuses in Beijing, Shanghai, Guangzhou and Hunan. For example last year on 25 November, the International Day for the Elimination of Violence against Women, 3,500 young men made personal pledges online and on campus, to say ‘No'.

They were joined and inspired by campaign ambassadors, the hugely popular young actor Chen Kun, and boy band ALiLang. “To live without violence is everyone's right! said the movie star in a video recorded for UN Women. The singers, meanwhile, have urged their male fans to join them, as “real men, by saying NO to Violence Against Women!

Whether promoting Model UN debates with UN experts on discrimination, or online quizzes and competitions on gender stereotypes, the Weibo campaign has digitally fuelled debate and discussion. “Can a man who cooks at home be successful? asked one quiz. “What are the most effective ways for husbands and boyfriends to resolve conflict? And youth, many of them in their teens, have been pitching in, and changing their minds.

“Violence is not a way to resolve the conflict, responded @WeiWei0506 to the latter question. “Be patient, smile. Communicate with her. As a matter of fact, the most important thing for a man, as her husband or boyfriend, is to show to her his sincerity and his respect.

Another, @MengNan123 offered his take. “To resolve conflicts, both sides - husband and wife - should seek a common ground of understanding. Healthy family relationships needs joint efforts by both. Never ever can domestic violence safeguard man's dignity in the family.

Elsewhere in Asia, this tool is being utilized toward the same end. Under the global UNiTE Campaign to end violence against women for example, UN Women is collaborating with PULIH Foundation in Indonesia on the 5 Finger Movement or “Gerakan Lima Jari to say ‘No'.

Targeting young people between around 18 and 25 years old, the campaign has involved a roadshow to high schools and universities in Jakarta, including small workshops on digital advertising and photography to explore the theme of VAWG. It has leveraged social media like Twitter (@gerakan5jari) and Facebook (Gerakan 5Jari) for outreach on campaign events, but also to spread information on dating violence, and on the services available for victims and survivors.

Working with the international NGO, Partners for Prevention (P4P) UN Women has also set up four other pilot social media campaigns, engaging more than 65,000 youth with positive prevention messages in India, Indonesia, Vietnam, and again in China; while in 2011 during the International 16 Days of Activism Against Gender Violencecampaign, 76 NGO partners in Cambodia joined together under the UNiTE framework to reach around 10,000 young people online. 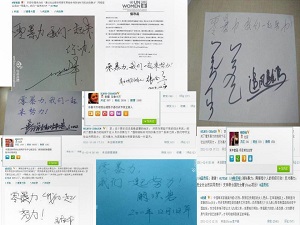 Signatures from young Chinese entrepreneurs who pledged to end violence against women in a campaign sponsored by UN Women, organized by Eastern Campus and posted on Weibo. Photo credit: Eastern Campus

“It's good for all of us to learn useful life skills, knowledge about healthy relationships, said one student union representative at the Beijing University of Traditional Medicine, reflecting on the debates that have swept his campus over the past year. “I now understand that domestic violence is not a private business but a women's human rights issue. Everybody, especially youth like us, have to take action to raise awareness among the general public to stop domestic violence.

Related News
11/12/2014
Around the world, women and men of all ages “orange their hoods” to end violence
06/10/2020
UN Women and Plan International to host Instagram Live on digital youth activism
09/04/2019
UN Women’s texting video series nominated for a Webby Award
14/11/2018
Young educators in China are questioning gender norms and preventing violence
22/05/2018
In the words of Yuan Feng: "Different sectors need to work together to fight domestic violence"
END_OF_DOCUMENT_TOKEN_TO_BE_REPLACED