Kenya moves to increase women in its police force, and improve their work environments 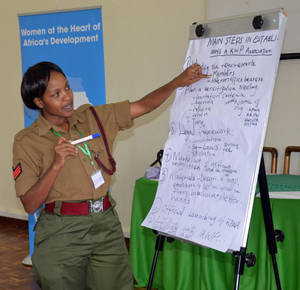 To boost and empower women in the security and legal system, Kenya is setting up an association of women police officers to promote their role in law enforcement and security reform. The National Women's Police Association will be a platform where policewomen can develop leadership skills, support one another and advance gender sensitive policies and practices throughout the force.

Sex-segregated data by gender is not available publicly for the Kenyan police force, but it is estimated that currently women make up only 11 per cent of the 73,000 members of the police service in Kenya. The Kenyan constitution however mandates a balance with neither gender being over two-thirds in any government body.

The establishment of the association comes against the backdrop of wide-ranging security sector reforms in the police force and the finalization of a National Act Plan to implement United Nations Security Council Resolution 1325. The resolution is the first to link women's experiences of conflict to the international peace and security agenda, and calls for women's engagement in conflict resolution and peacebuilding.

According to senior officials, the proposed association is a professional forum to ensure a women-friendly environment which will advance the work of the women police officers. “Women are under-represented in the national police service. We must change this. We are reforming the police institutions such as providing additional facilities for female trainees at the National Police Training College in Kiganjo. Women can handle tough police operations just like men. It is therefore a contradiction that women are mothers of the nation yet we are hostile to them, said King'ori Mwangi, Deputy Police Commissioner and Deputy Director of Police Reforms,

The new association is being cheered by many, and being urged to take a leadership role in the implementation of the national action plan under UN Resolution 1325.
“The resolution provides you with a good opportunity to work on peace and security for women in the country. This is your moment, seize it for the benefit of the country. We appreciate the role you play in securing our people, said Masoud Mwinyi, senior administration official. 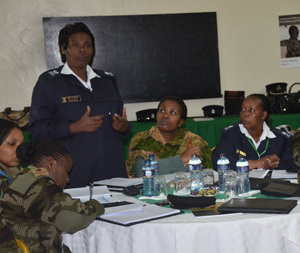 At the event to establish the association, UN Women Kenya Country Director Zebib Kavuma expressed pride at UN Women's partnership with the Kenya Police Service, which began with the Police Reforms Implementation Committee in 2010. She noted that it has been a very exciting and fruitful journey since then with many landmark events, including the participation of first ever formal delegation of Kenyan women police officers at an international conference on women in the police force, in the United States.

Related News
09/03/2021
This is what leadership looks like: Rewriting Kenya’s laws with Millie Odhiambo
28/07/2020
In the words of Christine Sadia: “Women must be given tools and training, so they fully comprehend what the risks are”
24/07/2017
In Kenya, women gear up for county elections
13/08/2014
Civil society strengthens partnership with new advisory group in Eastern and Southern Africa
06/12/2013
“What do the MDGs mean to me?” Girls and women speak from their own experiences at the Stakeholder’s Forum
END_OF_DOCUMENT_TOKEN_TO_BE_REPLACED