With income and rights, women living with HIV/AIDS start afresh in Cambodia’s villages

More than 1,300 poor women have received home-based care, skills-training and grants to start their own businesses through a Fund for Gender Equality programme.

I was afraid to sell goods to villagers,” admits Mom, a 35-year-old single mother of two young girls living in Norea Ten village in Svay Rieng province, in southeastern Cambodia. She used to work as a producer of local Khmer Wine (Sra Sor) but was forced to stop when she was diagnosed with HIV.

Mom recalls the hostility she faced from her neighbours in the village, who would take her products and refuse to pay for them – all of which made her fearful for her safety and ability to make a living. 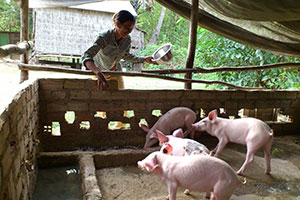 According to the Report of a joint UN AIDS & UN Women Asia Regional Technical Meeting on Responding to the Feminization of AIDS, between 1997 and 2006, the proportion of women living with HIV increased from 38 to 52 per cent. However, this trend has since turned around. In 2011, 44 per cent of new infections were women and this rate is expected to continue to decrease gradually. In rural areas, discrimination against women living with HIV and AIDS is compounded by the lack of education and knowledge of the epidemic.

In 2010, two local Cambodian NGOs, Cambodia Health Education Media Service (CHEMS) and Cambodian HIV/Aids Education and Care (CHEC) came together to develop a programme to tackle the many challenges that low-income women and those living with HIV face in rural Cambodia. The two-year programme was designed to address the challenges these women face in a comprehensive  manner, to strengthen their economic opportunities, leadership skills and access to health care, as well as to improve the knowledge about HIV/AIDS  among these  women and their families. CHEMS and CHEC applied for funding and successfully became a grantee of UN Women’s Fund for Gender Equality (FGE).

The programme “Strengthening the Economic Livelihoods Opportunities for Low-Income and HIV-Positive Women” was implemented in 12 provinces from 2011 to 2013, in close partnership with community-based organizations and Cambodia’s Ministry of Information, the National Aids Authority and the Ministry of Women’s Affairs, in line with the five-year national HIV strategy for 2009-2013.

Today, the programme has reached over 1,300 women, providing them with livelihood skills-training and grants to kick-start their own businesses, as well as health counselling and home-based care services. Through self-help group meetings, they have also increased awareness of their basic rights and developed their abilities to advocate for those rights.

When the programme’s home-based care team visited Mom at her home in 2011, she had no means of earning an income to support her two daughters. She soon signed up for pig-raising training, as her mother had an empty pig pen that she could borrow. Following her completion of the training, Mom received a USD 100 grant. She bought two young piglets for USD 50 and saved the rest. The first pig she sold for USD 375, allowing her to expand her business and buy four more.

Today Mom says she is happy with her job and has time to take care of her girls. She plans to spend the profits of her next pig sale on building a new house so that when it rains they will no longer have to go to her mother’s house for shelter.

By addressing the loss of livelihood, one of the most significant factors contributing to the poverty and vulnerability of women and families affected by HIV, the FGE-funded programme works with women to build a better future for women like Mom.

The final evaluation of the programme, which concluded in March 2013, indicates that beneficiaries are now generating more income, are committed to continue and expand the livelihood activities, and that their families have better nutrition and food security as a result, as well as funds for children’s school education.

In addition, Cambodia’s National AIDS Authority’s endline survey [1]  reveals another positive impact: a significant increase in the number of beneficiaries who can now afford to send their children to school after the programme’s implementation.