From play-acting to real-life action: a journey to end harassment on public transit in Egypt

“Every morning, I have a huge burden on my shoulders, taking the micro-bus to my work. It is an hour away from my house,” says Zeinab, a Cairo resident. “Harassment happens to me every day; is it possible that one day I will take the bus safely?” 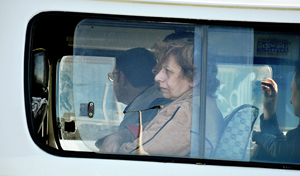 An Egyptian woman looking through the window of a micro-bus in Cairo, Egypt, where many women use crowded micro-buses without proper seating. Photo credit: UN Women/Fatma Elzahraa Yassin.

Zeinab’s concerns are typical of many Egyptian women. They wish they could just get to work safely, to walk without fear on the streets of Cairo, to use public transportation without being harassed and to simply enjoy their personal freedom.

According to the first governmental nation-wide sexual harassment study in Egypt, 86.5 per cent of women in Egypt don’t feel safe in public transportation. This study, titled “Study on Ways and Methods to Eliminate Sexual Harassment in Egypt,” was sponsored by UN Women and the National Council for Women in partnership with National Planning Institute and Demographics Centre in Cairo.

The study shows that public transportation ranks high on the list of unsafe spaces, and is the second-highest place where sexual harassment takes place, with public streets being the highest.

Recent news reports suggest there is an increasing trend of violence against women in public spaces. Several incidents were reported in different areas, including Tahrir Square, where until as recently as 2011, women were able to express themselves safely and actively.

“I used to go to Tahrir Square almost every day during the 18 days of the revolution but now I fear sexual assaults that might happen to me there. It is not about the square; a law criminalizing sexual harassment is needed at this stage,” said one of the girls who recently faced sexual harassment at Tahrir Square.

Sexual harassment is not currently defined under Egyptian law and UN Women has been advocating for legislative amendments, while working with partners towards a safe city model in Cairo.

As part of the Global Safe Cities Initiative,[i] UN Women launched a “Transit Campaign” in Cairo in November 2012, which includes performing arts to draw attention and inspire action against violence and to stop all forms of harassment on public transport. The campaign is in partnership with three youth groups — Imprint, Noon and Nefsi.

Noon uses interactive theater in metro-cars, however with a twist. They re-enact real sexual harassment incidents, without disclosing to the passengers that they are seeing an act.

On one recent busy Monday morning the scene began with three friends meeting in the metro car — one of whom was very upset about being harassed on the bus prior to boarding the train.

As the scene proceeded, with her retelling the story through vivid emotions, the actors drew in the onlookers, asking them to share their thoughts. Who is to blame? What is the solution?

Through this interactive theatre, they reveal the reality of harassment that has gone unreported for years. Only before they leave the car to jump into another, do the actors let the passengers know that what they saw was a theatrical performance.

“We want people to open a discussion about sexual harassment, and help us find solutions to this act,” said Heba Ahmed, a member of Noon.

“Since the Cairo subway attracts a wide range of people from different socio-economic backgrounds, we decided to create a safe atmosphere where we can raise awareness about the issue hoping to stop those violent acts in the metro and on the streets of Cairo,” added Nihal Zaghloul; co-founder of Imprint, which works closely with the subway administration and the police force.

Meanwhile, Nefsi will tackle the issue through another channel. They will work in a central bus station in the heart of Cairo to sensitize micro-bus drivers on their role in stopping harassment, and the benefits of their bus being “Harassment Free”.

The flyer used by Nefsi in its human chains against sexual harassment initiative, reads: “I wish to use the bus and no one harasses me”. Image courtesy of Nefsi.

They will also work with passengers, specifically women, to encourage them to report any harassment to the drivers, who can take immediate action.

The transit campaign aims to end the harassment that women like Zeinab face every day, and counter the inaction and passivity that characterizes their daily commuting.

“Sometimes I have to remain silent to harassment to avoid social criticism but I am fed up. I will not be passive anymore,” says Zeinab. “If I don’t speak up for myself, no one will be able to help me.”

[i] Safe Cities Free from Violence against Women and Girls is a global programme launched by UN Women and UN Habitat in 2010 in five pilot cities in India, Ecuador, Rwanda, Papua New Guinea and Egypt (Cairo). Part of the UN Global Safe Cities Initiative, the programme aims to create awareness among the general public, making cities and communities safer for women and girls. Through various activities on the ground, the ultimate outcome is a general public that is more responsive to, and thus able to help prevent, violence against women and girls in public spaces.

Related News
19/11/2013
From bike rides to pink ribbons, Egyptian anti-violence campaigns create ripples across the country
08/02/2018
“I learned to respect women”—Tuk Tuk drivers join efforts to make the streets of Cairo safe for women
11/08/2014
Games and children, a new direction to ending sexual violence
18/11/2013
In Fiji, communities mobilize ground-up to end violence against women and girls
28/10/2013
In cities, efforts to make public spaces safer for women and girls
END_OF_DOCUMENT_TOKEN_TO_BE_REPLACED