“A seed, a new era that will chart new pathways for women,” said Ana Laynes, indigenous leader and Mayor of Nebaj, Huehuetenango, a municipality in the highlands of western Guatemala, as she performed a Mayan ritual to open the Post-2015 Consultation with Indigenous Women in Guatemala, on 8 April. 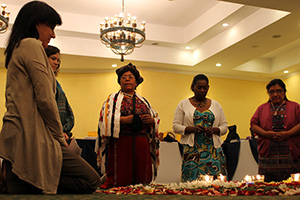 As the year 2015 approaches — the deadline for meeting the Millennium Development Goals (MDGs) — the Secretary-General of the United Nations, Ban Ki-moon, has called for maximum effort to be dedicated to their achievement within the timeframe. Simultaneously, the United Nations is supporting Member States to define the next process, the “post-2015” agenda, as it is being called, which will define the development framework for the period beyond the MDGs.

To ensure that everyone’s voice is heard in this process, national and regional consultations are being held globally, including in Latin America and the Caribbean as part of a world-wide mobilization aimed at charting the new post-2015 development agenda. These consultations are defining the priorities, efforts and resources to confront the existing development challenges, which include achieving gender equality and the empowerment of women.

UN Women recognizes that the new global development agenda must not only address specific gender gaps but also seek to transform the structural factors that increase gender inequalities, such as discrimination and violence against women and unequal access between men and women to social, economic and environmental development assets.

Colombian academic Magdalena León took part in the consultation organized by UN Women in Colombia on 21 March, along with artists, Congresswomen, women community leaders and rural, indigenous and Afro-Colombian women.

“There is currently no development agenda recognizing the rights of women to decide on their bodies and their actions. There is no goal in this regard and this could be an integral goal that would allow for true parity in every aspect of life, in politics and in public life,” she said, speaking about the MDGs and the future post-2015 agenda. 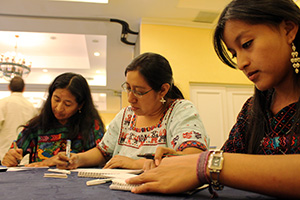 Alicia López, a young indigenous woman from the Aguacateca linguistic community and coordinator of the Mayan Women of Aguacatán’s Women’s Network in Huehuetenango, Guatemala, said: “As indigenous women, it is a civic responsibility to be present when such opportunities are made available and the space that UN Women is making available in the development of this post-2015 agenda enables us to meet and reflect. This is our opportunity to be included.”

The consultations are being conducted nationally as well as at the regional level. The regional meeting entitled “Realizing the Future we Want in Latin America and the Caribbean: Towards a Post-2015 Development Agenda” took place under the auspices of the Mexican Government and the UN system. This meeting resulted in the adoption of the Guadalajara Declaration on 19 April which states:

“The post-2015 process must address the oldest and the most recent challenges facing humanity. States must guarantee the right to a life free from violence and must commit to addressing, preventing and eradicating it in all its forms, including feminicide, human trafficking, violence against women, including older and younger girls, and violence against women working to defend human rights, women journalists, women sex workers and women working in conflict and militarized contexts.”

For wider engagement, consultations have also been extended online. The UN Women Regional Office for the Americas and the Caribbean, in conjunction with UN partners, is carrying out a virtual consultation on “Gender Equality and Empowerment of Women” at www.worldwewant2015.org/genero, together with a survey on priorities for inclusion in the agenda whereby everyone, can leave their opinions and ideas for the future. UN Women is using the same website to co-sponsor a series of consultations on inequality.

In the My World global survey, people can vote from 16 priorities for the post-2015 agenda, including ensuring that men and women have the same rights and opportunities.

This process provides a new opportunity for the public to identify the areas where development is lagging, to build on the achievements of the MDGs and to incorporate new ideas shared by a large number of people, all via on-line consultations and platforms.

The voices of women participating in both on-line and in-person consultations will contribute to the process of governmental negotiations as they define the post-2015 development agenda.