“We have to make next year a great year for transformation” – Nicole Ameline, Chair of the CEDAW Committee

Nicole Ameline has been a member of the UN Committee on the Elimination of Discrimination against Women (CEDAW) since 2008 and its Chair since 2013. She is a Deputy in the French National Assembly and, among the many roles she has held, was Minister for Equality in Employment. She currently sits on the French National Advisory Committee on Human Rights and the French Foreign Affairs Committee. She speaks to UN Women about the role of the CEDAW Convention and the Beijing Platform for Action, as we near its 20th anniversary. 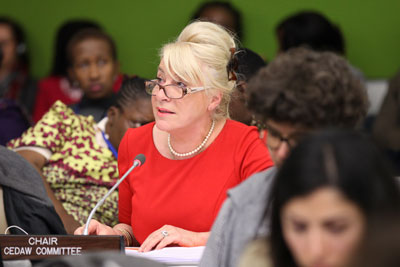 Nicole Ameline, Chair of the Committee on the Elimination of Discrimination Against Women (CEDAW). UN Women/Ryan Brown

Q: What is the value of the CEDAW Convention?

A: Today we have 188 States Parties to the Convention on the Elimination of all Forms of Discrimination against Women. We have to be proud of this kind of universal ratification. We have to transform this Convention into a sort of roadmap to accelerate de facto equality.

CEDAW is the only legal Convention to protect and promote women’s human rights and its Committee is probably the most fundamental instrument for women’s human rights. But we have to have a comprehensive and interactive approach. Our Committee has to work together with other UN entities, including UN Women of course.

Q: Is the CEDAW Convention the right instrument for advancing gender equality?

A: I’m sure that CEDAW and other legal instruments have transformed the lives of millions of women. I’m sure of that because I often evaluate the reality of the results on the ground. Thanks to State Parties, thanks to NGOs and thanks to the UN system, now the question is not about having new instruments. We have the legal framework; now we have just to implement it. We have to counteract the fragmentation of international law. It is time for action and it’s very urgent.

Women’s rights today are probably more important than ever. If countries were to implement all aspects of the Convention, we could have a very big jump in terms of democracy, well-being and peace. We don’t have to look for another Convention today. We have to implement what we have.

Q: CEDAW is touted by many academics and feminists and actors in the international community as the women’s bill of rights. At the same time, many people don’t know about it. How can we increase visibility?

A: The CEDAW Committee does not have sufficient visibility. And it’s one of the first questions that we raise when we welcome a State Party. I think that more and more civil society is very aware of our Convention. At the same time, we have to do more with State Parties.

We could be more forceful on the question of national development policies or international aid policies. I know this matter perfectly because as a Member of Parliament, I am in charge of such policies. I think that we can ask State Parties to integrate, in a more visible manner, women’s rights as a priority in their development policies. Women’s rights are a priority for sustainable development. UN Secretary-General Ban Ki-moon is very committed but I think that the UN system has to bring this message very strongly, everywhere. If not, we risk regression.

I hope strongly that next year with all of these important events – Beijing+20 but also the post-2015 development agenda – we’ll have the opportunity to reiterate that the CEDAW Convention is the only legal Convention to protect and promote women’s rights.

Q: How does the work of the CEDAW Committee intersect with the Beijing Declaration and Platform for Action?

A: [The Beijing Platform for Action] is for us – as for everybody in the world – a very fundamental platform and both human rights and development policies have to be founded on this basis. For women, Beijing+20 raised strong hopes and we have to transform this hope into reality.

The first big challenge today is the concrete implementation of our Convention, but also of the Beijing Platform for Action. And we have to make next year –with Beijing+20 and with the post-2015 agenda– a great year for transformation.

Q: How can we mutually reinforce existing human rights instruments?

A: Beijing is considered as a fundamental platform so I think that we have to associate Beijing+20 and the CEDAW Convention, which is the operational instrument for Beijing, as it is for other declarations of universal commitment. And I think that your role as UN Women is very important. You are at the centre of this issue because you are in charge of the promotion of women’s rights and the situation of women. I think that our roles are very close. So the time has come to act together and I have no doubt about your commitment.

Related News
09/12/2020
In the words of Nahla Haidar: “States have a due diligence responsibility on the protection of women human rights defenders”
19/12/2016
UN Women releases CEDAW for Youth
01/07/2016
UN Women statement on the Committee on the Rights of Persons with Disabilities
10/12/2015
Asia-Pacific makes strides in implementing CEDAW
21/03/2014
Collecting and carrying water, burdensome reality for women
END_OF_DOCUMENT_TOKEN_TO_BE_REPLACED